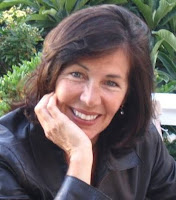 Susan Browne’s poetry has appeared in Ploughshares, Subtropics, Mississippi Review, Gargoyle, Margie, The Writer’s Almanac, American Life in Poetry, and 180 More, Extraordinary Poems for Everyday. Her awards include prizes from the Chester H. Jones Foundation, the National Writer's Union, the Los Angeles Poetry Festival, and the River Styx International Poetry Contest. Her work was nominated for a Pushcart Award. Selected as the winner of The Four Way Books Prize by Edward Hirsch, her first book, Buddha’s Dogs, was published in 2004. She also has a word/music CD with poet Kim Addonizio, "Swearing, Smoking, Drinking, & Kissing." Her second book, published in 2010, Zephyr, won the Editor's Prize at Steel Toe Books. She teaches at Diablo Valley College in Pleasant Hill, California. Find more information here.

No one answers, but I hear the TV’s drone.
I push open the door and there’s my old dad
hanging like an exhausted gymnast over the arm of the couch,
his fingers touching the floor, his pajamas on inside out.
How does he survive
the booze, the pills, the lack of food
and love? Who could love him? I love him,
but what is this? Again,
I have found him in time to take him to the hospital.
“I want to die,” he cries as I fold him into the car,
and it becomes his mantra while I drive
past the bowling alley, the gun shop.
Should I stop and buy a pistol?
“I have nothing to live for,” he says.
What can I say?
There is nothing to live for;
we make it up as we go along.
The earth didn’t have to exist,
but here it is, and here we are,
parked in the Emergency lot.
He stares fiercely out the windshield.
I touch his hand; it’s cold and scaly.
“There’s always bowling, I joke.
“I don’t bowl,” he says.
We smile at each other.
“There’s this,” I say to my father.

In 1998, on Father’s Day, my father nearly killed himself from drinking too much. After this particular occasion, after I got home from taking him to the hospital, I started writing the poem.

In one sense, I’d been writing this poem for decades. My father struggled with alcohol addiction most of his life, and I was his loyal witness. But the actual writing of the poem took about five months. I’m sure I put it through the mill of the workshop. In 1996, I started taking a poetry workshop from Kim Addonizio. I’m still in her workshop today!

I believe if you take two steps toward the gods, they take three toward you. You have to show up to the writing desk every day (maybe you get the weekend off for good behavior) and make yourself available. This poem is definitely the result of the sweat and tears of my life with my father and the life of working at my writing. Poems come to me easily, but I only show them to my cat or my writing buddies, and they usually undergo major construction and remodeling.

I read my poems out loud over and over, so I memorize them and then can work on them wherever I travel during the day. I like to run almost every day, and I find that’s a good way to start revising. I get away from the writing desk, into a new place physically and can hear and see the poem more objectively. Sometimes I take my poem for a ride to the grocery store and we sit in the parking lot and talk to each other. In this particular poem, I consciously employed the use of present tense for more immediacy and tension. Also enjambment of some of the lines to give it that headlong rush of finding my father once again in this perilous state. I used dialogue to try and show us, father and daughter, and our ability to find humor in a ghastly situation. My father taught me how funny life is and to never give up. He never gave up. He won his battle with alcoholism when he was seventy-five years old.

This poem was published in The Sun about eight months after I finished it.

I usually workshop my poems, so they go through a grueling regime before I even think of sending them out into the world. I know this about myself now: at first, I simply believe my poems are wonderful. Then I slowly wake up from my ego-trance and realize, “Gee, this poem isn’t doing a thing.” But then I begin tinkering, or I start another poem with some of the better lines. It’s a process, one that I love. I love to have a poem in my head. The ride to the grocery store helps. I should write a book called, The Parking Lot Poems.

This poem is all fact, except for the gun shop. There really was a bowling alley. And the last line is fiction.

Most of the time, I write for myself, a dialogue of self and soul. It’s a conversation with the world, though, too. Of course, I want to be read, so I guess I do imagine a good-willed reader out there who enjoys my voice. My poems are a sort of spiritual autobiography. I think of everyone’s poems that way, and I love to hear what the spirit has to say in its incredible variety.

Yep, this poem is all-American. Not exactly Leave it to Beaver fare, but American as apple pie with a side of vodka.

This poem was finished. Click, I heard the box shut. Someone taught me that a good close to a poem is both surprising and inevitable. I think I accomplished that here.
Posted by Brian Brodeur at 1:04 PM