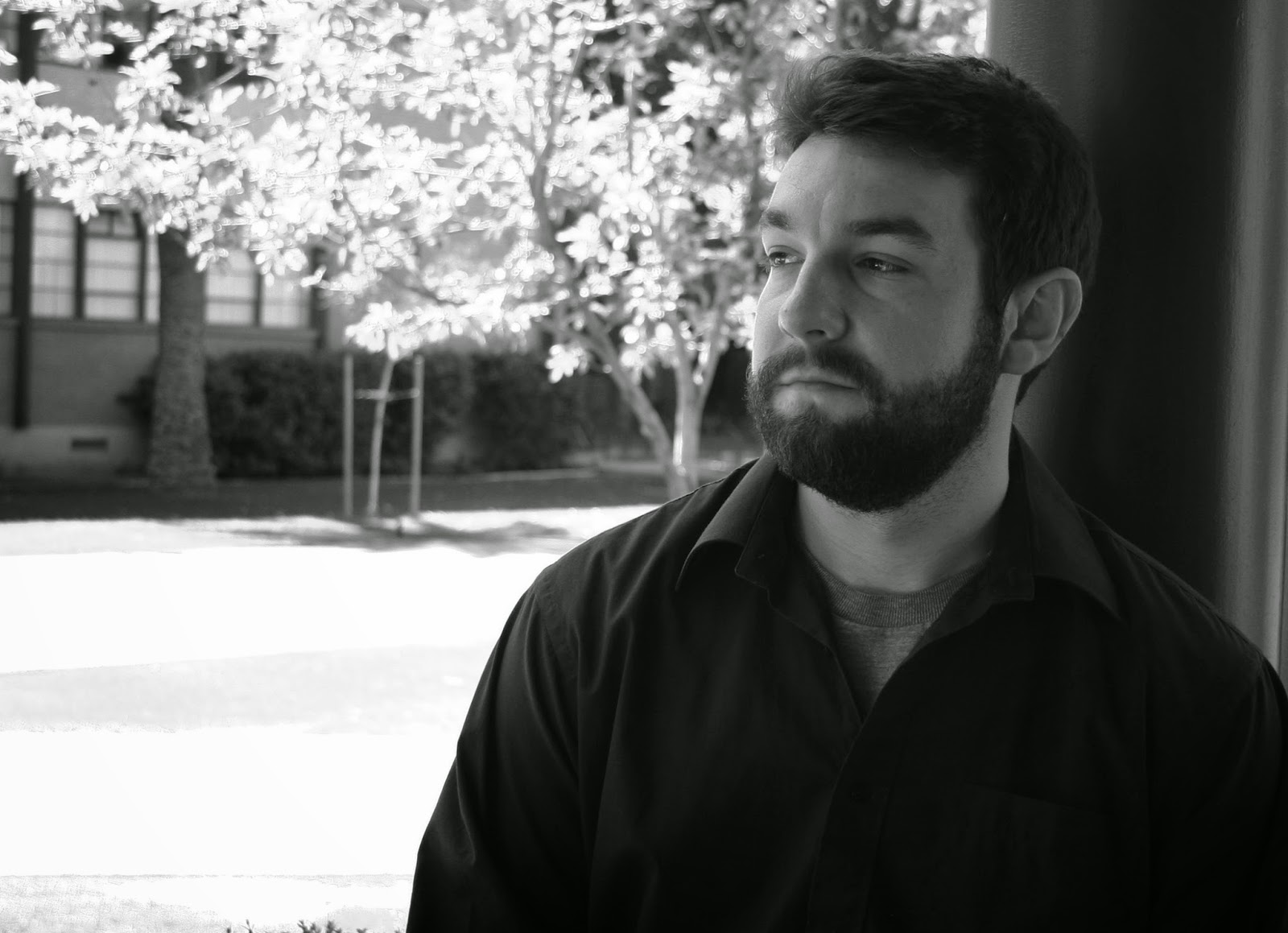 Hugh Martin is a veteran of the Iraq War and the author of The Stick Soldiers (BOA Editions, Ltd., 2013) and So, How Was the War (Kent State UP, 2010). His work has appeared recently in The Kenyon Review, The New Republic, and The New York Times’ "At War" blog. Martin was born in Ohio and graduated from Muskingum University. He teaches at Gettysburg College.

WAYS OF LOOKING AT AN IED

Notice that in both photographs of the artillery shells there is a wire leading from the bag. Also notice that the plastic bag had sand thrown on top of it to make it look more like roadside trash.—1st Infantry Division Soldier’s Handbook to Iraq

1.
Beside the field of potato rows,
Sumey sees an alarm clock

taped to a two-liter bottle. We create
a perimeter, back up the trucks, flatten

the potatoes under tires.
The Explosive Ordnance Disposal team

isn’t sure; when they’re not sure,
they blow it up.

2.
Why don’t you walk over there, Spoon says,
and get yourself a Purple Heart.

3.
With a broom, a woman beats a rug
draped over a clothesline. LT waves her away. Bomb,

bomb, he says, but she shakes her head,
turns her hips to swing again.

4.
Spoon is awarded
the Purple Heart in June

when the shrapnel misses his head,
but the bricks that hide the bomb

5.
When the shell detonates beside our truck,
the sound is too loud to hear; the wind wraps us

6.
For three hours we clear the neighborhood
because of a black plastic bag.

The staff sergeant in the bomb suit
orders everyone to back the fuck up even further.

In the bag he finds six ripe tomatoes.

7.
Sergeant Sumey says he almost vomits
turning in the turret

to see our truck vanish
inside smoke. Thought you were all dead.

who dig beside the road.
We hate the ground.

9.
Outside the city: rocks stacked
like children’s building blocks.

Sergeant Kenson won’t wait for EOD. It’s nothing,
he yells, and no one can stop him

when he starts to walk;
even LT tries to restrain him, but he walks,

and all four of us in the truck shout,
but it’s no use. When he lifts his leg

to kick the pile,
we look down. We close our eyes.

About three years or four years ago. It began because I wanted to do a sort of catalogue of IEDs (an obsession of mine after returning from Iraq). Some of them are based very much on my own platoon’s experiences. I really just started thinking about the images of the “improvised explosive device” and how these actually appeared—and exploded or didn’t—for us in Iraq.

I save all my old drafts and this one had five. The earlier drafts just have longer stanzas with more (too much) language and unnecessary information. I was still tweaking this poem as far as line length and word choice until my book went to the printer last winter. If I wrote it now, I wouldn’t use “lipstick” to describe the blood. It makes sense visually but not as far as the connotations of that word. I think it’s a mistake.

Maybe I can say it was “received” because the insurgents/anti-Iraqi Forces/Al-Qaeda/whatever we’d like to call the “enemy” was very productive as far as setting these things up for us in the towns we patrolled and spent time in. So the poem is simply “inspired” from something that I (and many soldiers and civilians in Iraq) were very, very concerned about on a daily basis.

Well, the title is taken from this older lawyer-guy who worked for an insurance company. I’ve always enjoyed, maybe from Whitman’s longer work, writing in numeric sections about Iraq. This allows me to offer quick portraits or images of landscapes, soldiers, whatever, and then move on to, sometimes, an entirely different scene. It’s sort of like presenting images in a film and then just cutting to the next—I like to see what the overall effect can be and how it can feel to the reader. I hoped that this poem would serve to give the reader the experience of confronting IEDs and how they’re frequently deadly or just completely harmless duds or fakes (a bag of tomatoes, etc.)—essentially, it’s supposed to be scary and bizarre and hilarious. Who knows if that worked out.

I’d argue most of my poems are similar to this one. Understated and image-heavy. Bits of dialogue here and there.

The poem was actually in the manuscript unpublished when my book was taken and then Blackbird accepted it soon after.

This is obviously a question most writers think about a lot. I’ve found for me, and most writers, it just varies. It’s more instinctual and intuitive. On average, I’d say 80% of the stuff I write I won’t even think about sending out for six months or a year. But I’ve been sort of writing and juggling new poems in the air since I was about twenty two, so I always have work that’s been developing, changing, and feels—sometimes and sometimes not—ready to go out. Some writers write a poem and send it out that week; others don’t send it out until years after. I have no answer for this.

This is something I’ve been dealing with since I began writing about Iraq. I’ve always had trouble writing about something I wasn’t specifically involved in while deployed—basically, there’s this soldier’s mentality where you don’t embellish or “make up stuff” about your time over there and this has carried over to my writing. Over the years, I’ve always just tried to do what’s best for the poem and what’s best for the poem’s needs. At first, I had trouble leaving out certain details or people in a poem because the memory had them there. Now, I try my best to decide what’s just there from memory and what’s there because it needs to be part of the poem.

For this one, I really will say that all of these sections are very much “true” experiences I had while over there. Some of the details have been changed and, of course, the contexts have been mostly removed since there is always so much I remember before and after a bomb is found. Finding bombs is actually boring because once you do have one, you just sort of move into a perimeter and wait, sometimes hours, for EOD (to make this more clear: the guys from The Hurt Locker) to come with their robots and bomb-suits and take care of the thing. If you’re in a bad area waiting around there’s obviously other problems. So, with this one, I tried to separate the wheat from the chaff, so to say—I just focused on some of the more intense or meaningful or humorous moments of “looking” at IEDs.

You could argue that each section serves as a little narrative and overall, the poem is a longer narrative about finding bombs. However, I don’t want to put my poems in one camp or the next—I just write them and don’t give a shit about lyric or narrative.

Don’t remember who exactly I was reading but my influences have always been veteran-writers like Wilfred Owen, Isaac Rosenberg, Randall Jarrell, Bruce Weigl, Ed Micus, Yusef Komunyakaa.  Something related to this poem (or I’d like to say it’s related) is my admiration for haiku masters like Basho, Buson, Issa. Some of their work I find incredibly stunning (though some pieces baffle me). I took a haiku class during my MFA and I also studied some of these poems in undergrad. Today, especially, brevity is important since everyone has to check their email or Facebook. Haiku is good for that. I could stretch the argument that some of the scenes strive to be “haiku-like” with their quickness and precision. Maybe just striving—that’s all.

Not really. I will try to think about my poems from a civilian perspective—this has changed the way I use military jargon and acronyms. I still use them but I try to provide more context sometimes.

I was doing the whole MFA-thing when I wrote this, so, yes, I am sure I workshopped it and got feedback. I do remember specific comments from a few friends and teachers.

I’d say, content-wise, it’s not much different. Aesthetically, it resists the typical story-like narrative that many of my poems take. If anything, the sections interrupt the narrative and move the reader from place to place against their will (though, I hope they are willing to go for the ride).

It’s in my first book and I can never change how it looks. So I’m finished with it.