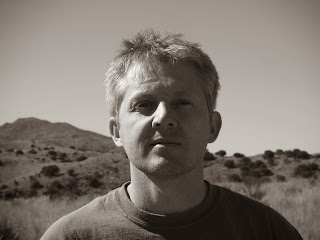 John Poch is Professor of English in the creative writing program at Texas Tech University. His collections of poems are: Dolls, (Orhises Press 2009; Two Men Fighting with a Knife (Story Line Press 2008), which won the Donald Justice Award; and Poems (Orchises Press 2004), a finalist for the PEN/Osterweil prize. The Essential Hockey Haiku (a poetry/fiction collaboration with Chad Davidson) was published by St. Martin’s Press in Fall 2006. He is a co-editor of the poetry anthology Old Flame: From the First Ten Years of 32 Poems Magazine.

On the high tin ceiling in the temporary room,
if you are patient, you can see where the panels
come together and, at the curved fleur-de-lis border,
the overlapping edges strained by weather and time,
the arbitrary network of cracks in the layers
of paint just like the patterns of minuscule cracks
up close in an old Flemish painting in a museum
once you look past the still-life at the very medium.
Above the ceiling, you know there are wooden beams
to which the tin is nailed. If you could see them,
the pine would be crude, but you accept the purpose
holding it all together and up, as a soul holds the body.

This morning, in the next room, the two porn actors
are not acting. They are making love the best they know.
For a while she cries out a rhythm quietly
while he is silent. Before they woke I heard
five distinct birds outside in the eucalyptus understory,
a garbage truck, a stirring, and then this flesh.
I hate and love them and think I know the dark house
they are headed for, the numb odor of old ink,
the room of needles and no thread and no one
finally watching, late understanding, but they don’t
want my worry. They want to feel the black of space
and sharp stars and answer to no one with a visceral art
never done exactly this way, an art that you, the viewer,
become lost in and take for an interim heaven, and look
and look, art that is, in this counterfeit way, a kind of beauty.

I wrote this poem at Headlands Center for the Arts while I was an artist in residence there in May-June 2007. It began one morning when the couple in the room next door were having sexual relations at a very audible level.

I probably revised various phrases and lines for a year or two, off and on, like most of my poems, but this poem found its way into its finished form in a fairly short amount of time. Maybe a month. I had written most of it by the end of that morning.

I believe in inspiration as the act of breathing in, preferably clean air with a good amount of oxygen; I don’t recommend it as an act for making poetry. It seems silly to me to think that if you take in air in any special way (deep breaths, eyes closed, legs crossed, etc) that poetry will come to you. Poetry comes in through the ear rather than the nose. This poem certainly came in through the ear via the sound of flesh and strange non-linguistic utterances. Under the door and into my ear. And I didn’t specifically desire to hear these noises. I wasn’t wanting them at all. I wanted silence, actually, so I could hear the muse. I don’t sweat much when I write, though I do ache from sitting in a chair because I have something wrong with my back. Nevertheless, I still sit myself down in a chair or sprawl out on the floor to get the work done. It is work to write a poem, though that doesn’t mean it isn’t a pleasure. I don’t cry tears over very much that I write, but I do sometimes tear up over other work I wish I had written, poems that move me.

By form, I suppose you mean these two rooms, these two stanzas and the length of the line. I usually write in a slightly shorter line. Iambic pentameter is a natural phrase length for me. I can’t remember exactly, but I believe I was writing about the room itself, the beautiful high ceilings and the space I was in, and the space beyond my walls, outside. Those birds and the garbage truck.

Not especially. But I’ll say I didn’t want to write about it. I’m certainly not eager to write about pornographers or sex because I feel like that would be something “intriguing” or “titillating” and I’m not out for those cheap thrills. I care about the art of poetry, and not the subject matter. But I bore witness to the event, and some phrases that I liked came to me, and these seemed like poetry, so I wrote them down to begin.

It appeared in the Cincinnati Review in 2012.

I try not to send anything off until a good first draft has set for at least three months. But there are exceptions. I have poems that I finish in one sitting (rare) and poems that I have been working on for fifteen years (rarer).

I used to write poems with a lot of fiction in them. I wanted to spice up the problems and the events because my life seemed dull. But I have found that I have plenty to write about now, and creating a fictional world or event for my poem usually isn’t necessary. And I write short fiction, as well, so I’d rather try and keep these two genres separate, though both still veer over into the other territory. The truth is imagined certainly, and the imagined is true in its own way. No?

No. This is a lyric poem. My definition of narrative is movement through time and space from one point to another. This poem, I believe, operates in the lyric moment. It isn’t exclusively about the music (I don’t strum the lyre, ever), but I do highly value the sonic repetitions and variations.

I can’t remember, but looking at this now, I see hints of the descriptive nature of both Elizabeth Bishop (subtle) and Charlie Smith (outlandish). And maybe even some Yeatsian grandiloquence mixed with the flat matter-of-fact.

Like Auden claimed, my friends and the poets I admire are my audience. More importantly, God. By this, I mean that I want it to be true and beautiful, but not a sacrifice. God doesn’t demand a sacrifice but praise.

Yes. I have two or three other poets to whom I show my work. They are gracious and tough. I prefer tough, though it’s nice to hear a compliment. I have learned to wait until it is fairly well-formed, though. I used to bother people with very new and awfully flawed work.

It’s oddly abstract at the end. I’m not sure I’ve earned it. And it is very judgmental.

Whitman and Dickinson. And Poe, the voyeur.

I believe every poem I’ve ever written could be better, but at some point I run out of ideas, and I need to move on to something else, or I will end up hating the poem and poetry.
Posted by Brian Brodeur at 6:02 PM 7 comments: