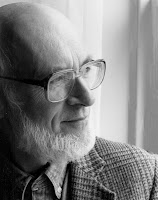 Rennie McQuilkin’s poetry has appeared in The Atlantic Monthly, Poetry, The Southern Review, The Yale Review, The Hudson Review, The American Scholar, and elsewhere. He is the author of ten poetry collections, the most recent of which is The Weathering: New & Selected Poems (2009); and he has received grants from the National Endowment for the Arts as well as the State of Connecticut. He co-founded and for nine years directed the Sunken Garden Poetry Festival. In 2003 he received the Connecticut Center for the Book’s Lifetime Achievement Award for service to the literary community. Rennie McQuilkin lives in Simsbury, CT.

At the very instant of Solstice, when the sun stands still,
all things are at that Moment of Equilibrium
when an egg will stand on end.

Nothing stands still this Solstice dawn.
Light lengthens on the bedroom ceiling, assuming
the form of a cross

with a bright amber square
at its crux. What physics is this? I’m used to
shadows — mullions and grackles.

A gilded blur begins to circle the top of the cross,
and the boy in me sees a perfect P-40 hung from
the ceiling, propeller pin-wheeling, glue still bright

where wings and body meet. The bishop in me
knows better — knows it’s the Holy Cross,
the crux of it the terrible brilliance of an open heart.

Now the base of the Cross is dividing,
dividing again, becoming long side-by-side legs,
and the cross piece too is doubling, is blessedly

a pair of arms pinned
by another pair of arms. Nothing stays
still — the legs are twining,

and her eyes are taking me in, brighter by the minute.
From the heart of us a light less amber than citron,
less citron than gold, is simplifying

whatever was merely human
until nothing is left of us but Light…
which slowly grows fainter, is gone — lets us down

to earth like anything perfectly upright declining,
falling, a moment after its Moment
of Equilibrium.

Watching light patterns move across the bedroom ceiling in the early morning before full awareness is narcotic—like looking up into a ceiling mirror or a skyful of clouds. It’s impossible not to begin conjuring shapes which are blessedly meaningless but which might, upon reflection, shape themselves into possibilities of meaning, multiple and even contradictory possibilities. That happened. It happened in the way I like best—the images came before the words.

I love revising, but only when re-vision is just that and brings me closer to the original experience a poem is striving to approximate. In this case it dawned on me that the way I’d seen the light-on-the-ceiling had begun in a child-like manner before moving into deeper waters in a sort of historical sequence. In revision, it seemed apt to place the boy-in-me before the bishop. In addition, I hope I upped the ante of emotion in the poem during revision. An instance might be the twelfth line (“the crux of it the terrible brilliance of an open heart”), which emerged during revision. Much of the poem, however, remained unchanged, even though minor alterations led to the usual plethora of drafts that I staple one on another. I suppose my poems are sedimentary, though I hope they are also igneous. I’m not the one to say.

I wouldn’t make a distinction between the two: for me, the most important sort of revision is “received.” As I mentioned earlier, it moves me closer to whatever was lying low when I wrote the first draft of the poem in question. The perspiring sort of revision doesn’t appeal. For that reason, short spurts of revision work better for me than long bouts of it. The less important but still vital sort of revision (tightening, focusing, clarifying, adding necessary detail, perfecting a rhyme scheme, and so forth) also comes most naturally to me during those short spurts.

When I saw that “Solstice” was tending to form itself in tercets, I helped it in that direction.

About 18 months. It was accepted by The Gettysburg Review about a year after I was fairly (but not completely) satisfied with it.

I do believe that a poem should sit a while (a year is none too long) before being sent out. I like to have a look at unpublished poems periodically while they sit on the bench. Pretentious language, vagueness and all the other shocking ills to which one’s verse is heir have a way of hiding out until seen in the cold and critical light of time. I also like to let poems brew several days at least before I set pen to paper. I am interested in the way memories, dreams and the like begin to accumulate around a notion that might not be fully gestated if delivered too early.

I see no reason why a poem must be slavishly loyal to fact. The essential truth is often not the literal truth. At the very least, a poem should be free to present facts selectively and impressionistically. In this case, however, the facts of the ceiling light show were so mysterious that I simply described them. I did conjure up the pin-wheeling propeller, though the way light appeared on the ceiling in one of its incarnations did for a time make it a balsa model, and the motion of the light was dizzying. The notion of an egg standing on end at the instant of Solstice has always appealed to me, even if I know it to be fiction, notwithstanding a friend’s assurance that it’s God’s truth. Some things ought to be true. So in the heart, they are. When I first began conjuring the poem, I thought it was headed for some sort of epiphany at the end. But the poem itself had other ideas: a fact of life that belied the fiction I had in mind. Oh, I forgot to say there was no literal lady in bed with me. Not on that occasion. I conjured her out of delectos past. There’s the fiction, flagrant but delicious! Or is it fiction at all? Perhaps the poem presents the lady as a Lass of the Imagination. That, Dear Reader, I leave to you.

Well, it does tell a story, albeit one that happens in the mind’s eye. That makes it narrative, I suppose. I like poems that journey.

I know that whatever I’ve been reading has a way of being reflected in what I write. Indirectly, I hope. But I can’t remember what I’d been reading at the time I wrote “The Solstice.” Whatever it was, I’m sure it crept in, like my dreams of the night before the morning after.

I always have a Dear Reader in mind, one I’d like to understand what I write but also be willing to stay with a poem long enough to do some spelunking. I can’t stand the sort of writing that aims to mystify or say I’m smarter than thou, but I do want to give my Dear Reader credit for curiosity and intelligence. For me, the best writing lies somewhere in between the totally inscrutable and the boringly scrutable. ’Tis a gift to be simple, though not simple-minded. The best art of all sorts is always the simplest, but only on the surface—like the most significant scientific theories. It’s interesting to watch a writer like Dylan Thomas move from verbal complexity to verbal simplicity, while at the same time increasing the complexity of his underlying message.

I have on occasion written poems for friends, but poems I have sent out into the world, even when they have been partly for the eyes of one beholder, have always wished to invite curious bystanders to have a look. For me, any poem worth its salt should have myth and archetype at its heart. With luck, their presence might make the poem a letter to the world.

I firmly believe in vetting a poem. The writing groups to which I have belonged have toughened up my writing enormously, and the wonderful readers to whom I show my work in the first instance have been the eyes of my eyes.

I hope “Solstice” is more international than American, at least I would wish it to be. But I suppose we all write out of a context that is both personal and national. I doubt a German writer would refer to a P-40 hanging from his ceiling, though he might have a Fokker up there.

I still feel something is missing, but I’m not sure what it is. I love issuing poems for anthologies or new books, since that gives me a chance to re-see them, imagining my way back in. If I do this completely enough, I sometimes find a phrase, a fact, even a facet that is missing.
Posted by Brian Brodeur at 11:11 AM