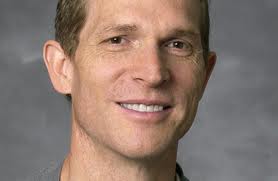 In 2012 Lance Larsen was appointed poet laureate of Utah. He has published four poetry collections, most recently Genius Loci (University of Tampa Press 2012). His poems appear widely, in Orion, Raritan, Poetry, River Styx, Georgia Review, Southern Review, Verse Daily, The Best of Pushcart Poetry, Best American Poetry 2009, and elsewhere. He has received a Pushcart Prize and a fellowship from the National Endowment for the Arts, as well as awards from Sewanee, The Joseph Campbell Foundation, The Anderson Center,  and Southwest Writers.  As an essayist he has won the Writers at Work nonfiction fellowship prize, and two pieces have been listed as notable essays—in Best American Essays 2005 and 2009.  He teaches at Brigham Young University and recently directed a study abroad program in Madrid.

The spirit keeps wanting to float off into Italian
frescoes, dissolve into acacias,
fall lightly like dust into the Indian Ocean.
Meanwhile the body, tired mule,
pushes the grocery cart through Perishables.
The math is simple.
Spirit + body = a sadness machine.

Subtract either spirit or body and you’re left
with a story
problem for actuaries.
Guillotines make permanent separation a snap.
Ditto famines and plagues,
ditto waves if you try to cross
the ocean without holding fast to a floating object.

But how to keep the machine happy—
supply it with live clams and dead auteurs?
Dance it through corn mazes
in the Midwest? An owner’s manual
would help, but how does one translate
the Upanishads of the clavicle,
and where do you add oil in a sadness machine?

Once in a San Jose park, on vacation, I asked
my daughter, Where are we?
She looked up at me: My dolly sits
on mine lap, I sit on yours lap, you sit
on the chair’s lap, the chair sits
on the world’s lap. There are a million
ways to say California. Only a few promise rest.

I completed the first draft in April 2004. I may have made earlier stabs, but have no record of them. I recall wanting to write a poem that weighed in on the soul-body duality in a fresh, unexpected way. I eventually settled on a method, yoking the meta-poetic discourse of analysis to images that I hope are vivid and visceral, perhaps even slightly surreal.

How many revisions did this poem undergo?

Hard to say. Is fussing with one sentence a draft? What about the times I read the poem over and despaired, then went on to something else? Then sometimes I made changes and saved the new draft over the old. In total, I’d estimate at least twelve or thirteen drafts, perhaps as many as twenty, which for me is getting off easy.

I submitted it to Agni in April of 2005, a year after I began writing it, and it appeared later that year in issue 62.

I’ve grown to distrust the word “inspiration,” which of course is one syllable short of “inspirational”—that dreaded synonym for anything sentimental, touchy-feely, or didactic. Still, parts of the poem felt as if they came from somewhere else, almost as if I were eavesdropping on primitive inside me, but I had to fight like a demon to translate what I “received” into language less mongrel and self indulgent. There’s always a mud fight between Dionysus and Apollo.

The earliest draft was fifty-five lines long, which I wrestled down to forty-two lines and placed in stanzas of seven. Then I tightened and cut, dropping a stanza, then later another. Now at twenty-eight lines the poem is roughly half its original length. This is often how my work goes: drastic cuts, shaping, corralling sprawl into stanzas, taking advantage of white space, working for fortuitous line breaks.

I often employ narrative, but in writing this poem I remember setting myself the task of not telling one unified story. Re-reading it now, I see that it’s a montage of sorts, relying on various snippets of implied narratives.

No set rules, though I almost always take more than a year between first and final drafts. I only finish a handful of the poems I begin. My castoffs resemble an unruly compost heap, if not a cemetery. But when I find something starting to work, I share drafts around. My first reader is my wife, Jacqui. I also exchange work with a handful of friends, and I belong to a writing group that meets once or twice a month in real time. When I can pass muster with those readers—and doing so is never a given—then the work has a decent chance of survival.

I was likely channeling certain poets who, at least in some of their work, bring to bear both personal experience and a philosophic mind. Stevens certainly, probably Bishop, Czeslaw Milosz, Robert Hass, Susan Mitchell, Dean Young. I’m leaving out a lot of people, obviously.

Very little of the poem is directly autobiographical, though I hope the lines have a lived authenticity to them. For instance, at home I’m the chief hunter and gatherer, that is, grocery shopper, so I know a good deal about pushing the cart through Perishables. In the closing stanza, I quote my daughter, who actually said those lines, or most of them. That’s the factual dimension. The fictional is that we were not in California at the time, but in our kitchen. Once during a Q & A, Philip Levine was asked whether he writes autobiographical poems. “Why would I want to be myself,” he answered, “if I could be someone interesting?” Of course, his work has a very distinctive voice and imprint—the Levine factor, we might call it—but he doesn’t let fact get in the way of a good story or compelling description. I’m after a similar thing in my own work: a life enhanced, pushed and pulled, disguised, spliced together, or distilled into a rich, more satisfying sauce.
Posted by Brian Brodeur at 5:00 PM 14 comments: