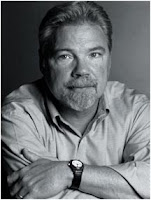 Robert Cording holds the Barrett Chair in Creative Writing at the College of the Holy Cross. The recipient of two National Endowment for the Arts grants in poetry, he has published five poetry collections: Life-list (1987), which won the Ohio State University Press/Journal award; What Binds Us to the World (1991); Heavy Grace (1996); Against Consolation (2002); and Common Life (2006). His latest collection, Walking with Ruskin, is due out in October 2010.

Remember those Saturday morning cartoons—
A safe creeping up the side of a building
On ropes meant to break and a man
Strolling below, whistling, blissfully unaware,
But blessedly inches out of reach
When the ropes give way just as expected,
The safe planting itself in the sidewalk
Like a down payment on another life.

Well let’s say the man is a guy I know,
A good husband and father of two
And that he’s just come up
From the subway into the splendid sun
Of an autumn day and he’s dawdling,
Drinking a second cup of coffee,
Maybe enjoying the angle of the sun
Falling between buildings and the blue

Prospect undisturbed by clouds,
When a plane explodes into the building
Where he works and, as he watches,
His entire building collapses.
In the months to come, his odd luck
Teaches this sane and orderly man
That his life is neither sane nor orderly.
He is a good man, kind and loving,

But, though he tries to return to life
Just as before, he cannot stop believing
He must change his life. A year later
He leaves his wife and kids with plenty
Of money, and tries to begin again.
He travels for a while, saves time
For himself, reads more novels, joins
A Buddhist Center. Two more years go by.

The shock has worn off. The man
Has resettled thousands of miles away
In another city much like the one he left.
He still stops at Starbucks for a second cup.
He’s remarried—a second wife hardly different
From the first. He’s back doing the same
Kind of work, getting in some golf
On the weekends. That’s the story

He tells me one afternoon inside the dark
Of his favorite bar where he’s holding up
A cell phone. The leaves are turning colors
Again. We hoist a few, fall into the ball game
On the TV, waiting for a couple of players
To get on base, or someone to hit one out.
But it’s a pitcher’s battle, lots of beginnings
Turning out as repetitions and zeroes

On the scoreboard. We’re both
Pretty drunk when he looks into his drink
Like he’s reading entrails for a doomed
Empire. He says he can’t stop feeling
That there’s a giant hole in the middle of
Everything. In his dreams, he’s always
At the edge of the hole and looking down.
He knows nothing can ever fill it.

Like most of my poems, this one knocked around in my head for a time. Shortly after September 11, there were newspaper reports of people who had stopped for coffee or had missed their usual train, or were just dawdling in the good weather, and so were not yet at their office in the World Trade Center when the first hijacked plane exploded into the tower. The actual poem began two years later when the opening lines about the Saturday morning cartoons popped into my head. It was more the voice of those lines than their content that mattered—it helped me think of those reports less realistically and more as a possible parable I could tell. I never wanted to address 9/11 directly; I didn’t have the stomach or the talent for it.

This was an odd poem for me. I kept putting it off, primarily because I thought any writing about 9/11 would end in falsely appropriating the event. When I did start the poem finally, the time scheme between first and final drafts was much the same as my other work—for me usually six months to a year between starting a poem and sending it out to magazines. “Life Changes” fit that pattern.

I think most poems involve both. Most of my work is the result of a number of revisions, the trial and error process of trying to get said what wants to be said, and the coming to know what can go unsaid. Much of the time is taken up with plotting the poem; cutting out what doesn’t need to be there; finding the poem’s form on the page. But I cannot usually begin a poem until I “hear” the voice of the poem. And the voice of this or that poem often seems “received” and curiously magical.

Because of my teaching schedule, I tend to draft poems in the summer and then work on revisions during the fall semester. I usually exchange poems with a couple of other poet friends during this time. And then I send poems out during the second semester.

Though the poem alludes to September 11 and uses the facts of the day itself, “the guy I know” in the poem is entirely fictional. I was looking to create something like a fictional character who is both unlikable and sympathetic, and in whom we could see ourselves and the way, to tinker with the cliché, the more we change, the more we remain the same.

Telling a story is important to me, and yet I’m always trying to find the right mix of narrative and lyric elements.

I don’t remember if I was reading someone in particular. I do remember I was trying to write more “parable” like poems at the time. One of my favorite poets, George Herbert, is always in my head, especially when I’m considering the dangers and pitfalls of trying to live an honest spiritual life. And I can see the influences of Carl Dennis and Stephen Dunn whom I admire a great deal.

I think my ideal reader is someone who is struggling to figure out how to live his/her life—as I am.

How does this poem differ from other poems of yours? What is American about this poem?

I was probably more deliberate here in trying to link the struggle to live a meaningful life to the historical events of September 11. After the horror of September 11, the historian David Levering Lewis described the event as a “virtual consecration on the part of Americans to self-assessment and to probing the circumstances that produced the greatest violation of our sense of self since Pearl Harbor. Indeed when people asked, Why do they hate us, a large number of Americans were encouraged to believe that there might be an earnest and prudent and informed search for answers to that question.” I asked that question myself. And today, I find myself still asking that same question because in some ways “Everything has changed, though nothing has.” I don’t intend by asking such a question that we ever lose sight of the monstrous wrong that was done that day; but I believe that we still need to ask and keep asking why many people around the world were not astonished that the terrible events of that day happened.

Aren’t all poems abandoned once the writer reaches the best rhetorical finish he/she can achieve? As Eliot said, our words are “raids on the inarticulate.”
Posted by Brian Brodeur at 10:02 AM