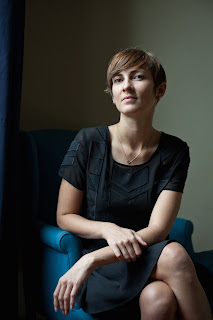 Sarah Rose Nordgren is a poet, teacher, and multiform text artist. Her two books of poetry are Best Bones (2014), winner of the Agnes Lynch Starrett Poetry Prize, and Darwin’s Mother (2017), both published in the Pitt Poetry Series through University of Pittsburgh Press. Among her awards are fellowships from the Fine Arts Work Center in Provincetown, the Vermont Studio Center, the Virginia Center for the Creative Arts, and the Bread Loaf and Sewanee Writers Conferences, as well as an Individual Excellence Award from the Ohio Arts Council. Her poems and essays appear widely in periodicals such as Agni, Ploughshares, The Kenyon Review Online, Best New Poets, Copper Nickel, and American Poetry Review. Nordgren currently lives in Cincinnati and is an Associate Editor for 32 Poems.


Yes, we have a soul. But it’s made of lots of tiny robots.

My soul rose up in me,
a colony I follow.
My soul has a trillion brittle wings,
a billion black bodies.
My soul formation is Stratus.
My soul’s parts know little
and don’t care whether I live or die.
Its components make a mind outside of me,
hovering over the driveway.
My soul is not waiting—
It cannot wait.
What is the sound of my soul?
Incessant clicking and chattering
like many sets of tiny, wind-up teeth.
It appears as a hurricane,
sandstorm, or soot billowing.
Its moveable parts can arrange themselves
to make a mechanical hand.
My soul pulls at my soul.
I am not responsible for my soul
for it acts independently.
I am in awe of its cities
and public works.
Its vast demolition projects.
Every seventeen years
my soul disperses after mating
and litters the road
with fat, crushed zeros.

I started writing this poem while at a residency at the Virginia Center for the Creative Arts in the summer of 2013. I actually can’t believe it was that long ago, because this poem still feels pretty new to me, but I’m going to trust the date that the Word document says it was created.

The poem really grew from my encounter with that wonderful quote from Italian philosopher Giulio Giorello, which I came across in philosopher Daniel Dennett’s book, Freedom Evolves. It made my brain explode a little bit! The basic concept, of course, is that the soul’s existence relies on a process of emergence, so that’s what I was playing with here.

This poem looked very much the same when I first wrote it as it does now, but I’d say it went through about three or four proper drafts in which I was mostly experimenting with different words and phrasings here and there. The first draft was in May 2013, and the last significant draft is dated August 2015, so there was about two years of fermentation.

I very much believe in inspiration—and it’s made of lots of tiny robots too, I think. In this poem—as in many of the poems from Darwin’s Mother—I had a very loose and open compositional process. The poems are pretty raw and fresh feeling, and a little lopsided at times too. They’re much less “wrought” than many poems from my first book, and I really enjoyed using a gentler handle on my own language. This poem came fairly quickly, and I’d say it felt about half-received and half-made.

As I mentioned, this poem was mostly born in its final form. Its structure relies, of course, on the anaphora of “My soul” which served as a generative device in the writing of the poem, but which I also hope creates a kind of incantatory effect in reading it.

The anaphora or listing structure of this poem is not usual for me at all. Also, the line lengths are more jagged than I’d generally write, but it came out of this jaggedy feeling of all of the insects swarming, and the lines do emerge into a kind of soul-shape when taken together.

I guess I’ll consider the poem “finished” in August 2015, and it was appeared in Narrative in June 2016, so about a year.

I don’t have rules about this and it definitely varies. Like most poets I’m sure, I’ve definitely had the experience of being excited about a new poem and sending it out too early. Then it either doesn’t get taken—and you feel ashamed for having sent it in the first place because you begin to doubt it’s ready—or it does get taken and you realize it wasn’t ready, and you’re in the position of either letting it run or pulling it after the fact, which is also embarrassing.

The past few years I haven’t felt much of a rush, and I’m a poet who often thinks in books rather than in poems. I’ve just now started to send out some poems that I wrote two years ago for my next book, and it still feels pretty early since I don’t have a handle on that project yet.

Seriously though, I think this poem exists between the two poles, perhaps in the realm of “speculation.” Many of the poems in Darwin’s Mother are thinking through existential questions, and this is one of those.

I was reading a lot of evolutionary theory, philosophy, and nonfiction, hence the Dennett and Giorello. In terms of literary texts, I believe that summer I had on my desk Edith Södergran, Jean Valentine, Mary Ruefle, and Lydia Davis, some of my go-tos.

I didn’t have a consistent feedback-system while writing Darwin’s Mother, as I was traveling through a number of “betweens” in my life during those years. I did have a monthly group with two other women in Cincinnati that met for awhile, but I don’t think I brought this poem there.

In summer 2015 I was a Fellow in Sidney Wade’s workshop at the Sewanee Writer’s Conference, and after the conference she asked to see the manuscript of Darwin’s Mother and gave me some great suggestions. And this is a big deal: the final line of “Material” was originally “fat, crushed nothings,” and she suggested the change to “zeros” which I think is much better, even though I was already using “zeros” elsewhere in the book.

I recently read Susan Howe’s The Birth-mark in which she talks about “the stutter,” or “the sounding of uncertainty” as the most interesting quality in American literature. I think (I hope) this poem has a little of the stutter in it, in its attempt to characterize the ungraspable—the wilderness of the unknown. Or perhaps it’s like a scientific process of trial and error. Or perhaps it’s a wandering litany like Ginsberg’s “America.”

Finished. Once your zeros are crushed, you’ve got to reincarnate somewhere else.
Posted by Brian Brodeur at 3:03 PM 30 comments: