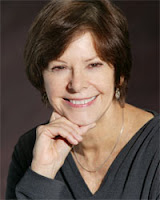 Fleda Brown’s Driving With Dvorak was published in 2010 by the University of Nebraska Press. Her most recent collection of poems, Reunion (University of Wisconsin Press, 2007), won the Felix Pollak Prize. The author of five previous collections of poems, she has won a Pushcart Prize, the Philip Levine Prize, the Great Lakes Colleges New Writer’s Award, and her work has twice been a finalist for the National Poetry Series. She is professor emerita at the University of Delaware, and past poet laureate of Delaware. She now lives in Traverse City, Michigan, and is on the faculty of the Rainier Writing Workshop, a low-residency MFA program in Tacoma, Washington.

The woman with the pale hair is signing
the poem. Not that kind of signing.
Her hands dip and flutter and hop
against the black backdrop.
Her mouth shapes emoticons.
Really, I’m not sure what
the mouth’s for. I watch her lips,
the poem changed to hieroglyphs.
She makes her eyes turn off and on.
Keats’s could do no better. Still
wouldst thou sing and I have ears in vain.
Her face goes from happy to pained.
She is inside the poem where the birds live
with their hollow mouths.
I am watching her more than I’m listening.
The poem is not something she believes.
It has sprouted on her like leaves.
It has come out the other side of itself.
Which makes me wonder if I will ever
be able to recover from language enough.
Those people who pray with their palms up
as if they’re catching or releasing
electromagnetic waves?
This is definitely not me. I’m following
the words as if they were closed captions
for the trumpets and blazing of the Rapture.

I think I might have taken a few notes for this poem while sitting in the audience at AWP listening to a poet read. The poet was on stage, a long way from me—it was a big room—and I ended up watching the person doing sign language more than I was watching the poet. The sign language was its own poetry. I started thinking about how the poem must seem to the person signing, and how it must seem to the deaf person. How a poem changes into a different thing with each translation. A little while after I got home, I wrote a draft.

I honestly don’t know, and these days as I work more and more directly on the computer, a poem keeps morphing and morphing and I don’t know what to call a “draft” or another “draft.” What are future editors of editions going to do? It’s like a Rubiks cube that you keep moving the pieces until they make a design. Maybe I had it in motion for several weeks before it settled into a place that felt right.

I was able to find several versions I had printed out. The first version is shorter and ends with “How can I ever recover from language enough?” I hadn’t found the poem yet! A later draft ends with “All I do/ is hunch over and trail my finger along/ the actual words as if they were Braille.” I was getting close to it, now, but instead of letting the poem fly out of my grip into its own life, I was trying to hunch over and clamp it down.

Another happy change I see is that I had originally said of the signer, “She looks so sad, now thrilled.” I changed that to “Her face goes from happy to pained,” which is richer in language and also gives me a chance to sound the word against “vain.” I also changed “zaps of extraterrestrial energy” to “electromagnetic waves.” I like the sound better, and I think the tone is a lot better. Not so consciously cute, and more scientific, a more ironic perspective on the people praying with their palms turned up, more in keeping with the speaker.

I think there are two kinds of inspiration: the split second of awareness that there’s a special energy in the moment, the event, that makes you want to do something with it, and the one that comes in the middle of the work when you break through—if you’re lucky—to a vein of meaning you didn’t even know was there. When I say meaning, I mean something far from a “moral.” I mean a breathless and uncontrollable gap in linearity that reveals a truth there are no words for. This kind never happens for me until I’m deeply enmeshed in making the poem.

I’m very attracted these days to repetition of sounds, and I arranged the lines and changed a few words to get some of those chiming sounds going: hop/backdrop, lips/hieroglyphs, vain/pained, etc. I’ve been writing poems a long time. Any “principles of technique” are so embedded in me I work with them like a blind person, feeling my way through what I know. I want a line to be taut in itself, to have its own integrity, so I tinker with line endings. I am ruthless in cutting things out, but in this case, I added and re-thought some lines.

It will appear in my new book, No Need of Sympathy, which will be out in 2013 from BOA Editions, but your use of it here is its debut as a single poem. Since I’ve retired from teaching, I’m lazy about sending things out. I wish I’d do better, but I think I’m rebelling after all those years of having to yearly tally up my publications for tenure, promotion, and merit raises.

It varies. Some poems I’m more sure of than others. I usually send poems to a good friend poet, and then I show them to my husband, both of whom are too kind, but they do call my attention to places I want to fix. And the tone of their response is the best information.

I think all poems are narrative in that they have an embedded story. Even Keats’ “Ode to a Nightingale” is narrative. He listens to the bird, he wants to be carried away from his sad situation, but he must return to his life. My poem maybe follows a narrative of the mind, contemplating. First it thinks this, then this, and concludes this, kind of like Keats.

I might have just attended a wonderful session on Keats at AWP with David Baker, Stanley Pumley, Ann Townsend and someone else I can’t recall. I think I stole the phrase “recover from language” from somewhere, but I don’t know where now. “Close captioned” popped into the poem because I watch TV at the gym with the close caption turned on, so it was in my head. Also, I have to say, my hearing is bad and so I’m interested in issues of how we translate what we can’t quite hear.

My ideal reader is the host of my brilliant predecessor poets as well as those contemporary poets whose work I passionately admire. On the other hand, if an ordinary person who seldom reads poetry can’t make heads or tails of what I’m doing, I think I’ve failed.

Yes, I mentioned both my husband and a poet friend. I used to need more advance readers, but find these days that I really only want some verification (or not) that I’m right to go public with the poem. For years, when I was teaching at the University of Delaware, I met with a poet friend for lunch once a week and we meticulously went over each other’s drafts. At some point, that felt unnecessary and even limiting. Years ago I worked with a few other young poets in a workshop situation. Now I comment with a great deal of energy and attention on my students’ work in the Rainier MFA program, and that’s all the time I’m willing to give these days to other people’s work.

It does feel a little different, maybe slightly more ruminative. There’s literally no action by the speaker in the poem. She’s only thinking.

I don’t know. There are no large social issues in it, which some might find typical American narcissism, but then I read translated poems that also are inward, quiet, and contemplative. The reference to evangelical prayer would probably peg it as American.

I must think it’s finished, since I put it in the book manuscript and I haven’t gone back to it. It may be that as the book is beginning production, I find some changes I want to make. But I’m pretty happy with it at the moment. I was glad to have developed that speaker who’s so scientific, who worries if she’ll ever “recover from language enough” to be able to express what language can’t convey, yet she follows the signing as if it were “closed captions/ for the trumpets and blazing of the rapture.” I like the passion that escapes from her at last. The poem is really about belief, isn’t it? The signer doesn’t “believe” the poem: it just sprouts on her like leaves. She doesn’t need “belief.” The poem simply passes through her.
Posted by Brian Brodeur at 1:58 PM 16 comments: