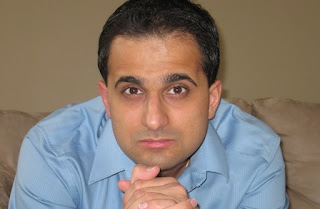 Amit Majmudar is a novelist, poet, translator, essayist, and diagnostic nuclear radiologist (M.D.). He is the author of Godsong (2018), a verse translation of the Bhagavad Gita, and three collections of poetry, most recently Dothead (2016). He writes and practices in Westerville, Ohio, where he lives with his wife, twin sons, and daughter.

The arms I sing. Forget the man, there is
no other epic. Sing the arms of kids,
the ones with pustules all along their veins

like runway track lights burning for a plane
that blew up hours ago with no survivors.
The ones with runes no parent can decipher,

one message, knifed and scarred and knifed again
in a mystic tongue forgotten who knows when.
The arms imprinted with a shadow grip

as if the dad who grabbed and crushed had dipped
his hand in black paint first. The arms with tight
arcs of perforation: human bites

that get infected faster than a dog’s.
The toddler’s arms with both hands scalded raw
all glisteny and hog-pink, swollen taut,

the tantrum over, the lesson taught,
two signal fires that call across the plain
the city is sacked and all the children slain.

I have little exact memory of when I composed this poem (other than that it was some time in 2013, since its publication date is in early 2014). I remember it started with the first line and wrote itself from there.

I usually just revise as I go, so each line may have been tweaked and redone and micro-revised a dozen times. I'd need a keystroke tracker program to figure out exactly what word or punctuation mark I changed when. So that aspect of the poem's genesis is lost.

I do believe in inspiration, but I don't believe in the poet's passivity in the inspired state. It only feels passive because of the muscle memory that comes from practice. I believe that sweat and tears, put in copiously early in the career, can make you likelier to "receive" poems from yourself, or the Muse, or the Gods, or the subconscious or whatever.

Initially I wrote it in couplets with spaces between the couplets. Then I rearranged the poem into tercets, and it looked better that way. The technical aspects are on the surface--heroic couplet, basically, which dovetails well with the theme of an Invocation to the Muse.

Not really. Just me in my study, at my iMac, tapping away.

About ten months or so.

I've gotten poems accepted within hours of writing them. I recently sold a novel to Penguin Random House India that I'd written in 2010. There are no rules. I write a lot, and some things I bury and discover later, other things I am very aggressive with sending out.

The poem conjures some memories of the time I spent as a medical student in an adolescent psychiatry unit. A lot of suicide attempts and people who engaged in self-harm. Cutters and drug abusers. I would go in each morning and interview these kids. I was told some things I will never forget. Images I can't shake, and it's been like sixteen years. Like the girl whose stepdad took her to the basement and tied a rope around her neck and tied the other end around a crossbeam and then raped her with her hanging there. He did it standing up with his hands behind his back. And she had to cling to him while he did it because she knew if she let go she would fall and hang herself. It turned him on, how she clung to him. She was ten when it happened. She was fourteen when I interviewed her. She had emptied a bottle of Tylenol into her body the night before. She attempted suicide annually. "One of these times," she told me, "I'll get this right."

Not really. Only implicitly, obliquely. See above.

No, I don't remember who I was reading, but I know my influence when I write the heroic couplet is basically Alexander Pope.

No. My ideal readers were the old Elizabethans. They liked metaphor and emotion and serious play and wit.

It's not that often that I directly engage with the classical Mediterranean epic tradition in this overt a way.

The runway tracklights. And the speaker.