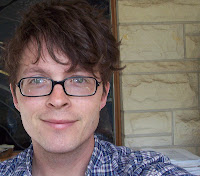 Matthew Dickman is author of the chapbooks, Amigos (Q Ave Press, 2007) and Something About a Black Scarf (Azul Press, 2008). His first full-length collection, All-American Poem, won the 2008 American Poetry Review/Honickman First Book Prize in Poetry. He has had work in Tin House, Clackamas Literary Review, Agni Online, and The New Yorker, among others.

The skinny girl walking arm-in-arm
with her little sister
is wearing a shirt that says
TALK NERDY TO ME
and I want to,
I want to put my bag of groceries down
beside the fire hydrant
and whisper something in her ear about long division.
I want to stand behind her and run
a single finger down her spine
while she tells me about all her correlatives.
Maybe she’ll moan a little
when I tell her that x equals negative-b
plus or minus the square root
of b-squared minus 4(a)(c) all over
2a. I have my hopes.
I could show her my comic books
and Play Station. We could pull out
my old D&D cards
and sit in the basement with a candle lit.
I know enough about Dr. Who
and the Star Fleet Enterprise
to get her shirt off, to unbutton her jeans.
We could work out String Theory
all over her bedroom.
We could bend space together.
But maybe that’s not what she’s asking.
The world’s been talking dirty
ever since she’s had the ears to listen.
It’s been talking sleazy to all of us
and there’s nothing about the hydrogen bomb
that makes me want to wear a cock ring
or do it in the kitchen while a pot of water boils.
Maybe, with her shoulders slouched
the way they are and her long hair
covering so much of her face,
she’s asking, simply, to be considered
something more than a wild night, a tight
curl of pubic hair, the pink,
complicated, structures of nipples.
Maybe she wants to be measured beyond
the teaspoon shadow of the anus
and the sweet mollusk of the tongue,
beyond the equation of limbs and seen
as a complete absolute.
And maybe this is not a giant leap
into the science of compassion, but it’s something.
So when I pass her
I do exactly what she has asked of me,
I raise my right hand and make a V
the way Vulcans do when they wish someone well,
hoping she gets what she wants, even
if it has to be in a galaxy far away.

The poem “V” was written during the summer of 2003. I was living in Austin, Texas. I was walking down South Congress and passed a young woman wearing a shirt that said “talk nerdy to me.”

The poem has been revised around twenty-four times. The final version was written two years after the first draft.

I do believe in inspiration. Inspiration and meaning-making. Often they are bed partners. Human beings are meaning-making creatures. We cannot help it. We cannot stop doing it. So that meaning was made for me from seeing this person wearing a particular shirt is no great gift from the gods but it is still wildly moving to me and an important part of inspiration.

I believe the whole poem was “received” only some of that reception came through pulling my hair out and chewing the end of a pen to death. Every poem is “received.” Though, if by “received” you mean “came easy” or “came quickly” then no. I believe each poem one writes takes a lifetime to arrive. Up to the point of writing “V” I had been writing toward it since August 20th, 1975.

As with other poems, “V” came into it’s final form only through intuition and a sense of “ending” as much as is possible. I have no “techniques” that blueprint a beginning and end to any poem I write.

“V” was published in All-American Poem three years after it was written and appeared on its own in Tin House Magazine a few months after that.

I am very random when it comes to sending work out. I have no rules that delineate when a poem should be submitted or how long it should “sit.” In fact, poems should never sit. If it’s nice outside and you feel like it, you should send the thing out into the world. The world is where it belongs anyway.

The factual DNA of “V” only exists in the first thought of writing the poem. That experience of being moved by the woman in the funny t-shirt is the only autobiography. Once the poem begins to be written it is spiritual fiction from then on out.

“V” is not a narrative poem though it has narrative taste buds.

Can you address the difficult balance this poem achieves between humor and poignancy?

In “V” humor and poignancy are almost twins. But isn’t this the way, almost always, in our lives? When someone says something funny and also meaningful it is not through skill but, as they say, it’s funny because it’s true.

Was this always a funny poem?

When I was first writing “V” I didn’t know I was writing a funny poem. I was very serious about what I was writing and was actually surprised to hear my first readers laugh.

My influences don’t always pair up with my poems. I remember reading a lot of Milosz and Jean Valentine when I wrote “V.” I think they both probably influenced “V” through their great abilities of statement.

My ideal reader is always myself. I am so at sea when writing a poem that there is no room in my capsizing boat but for one person.

The second draft of “V” was seen by many people. I was a student at The Michener Center for Writers when I wrote the poem and brought it to workshop. Outside of school, which has been most of my writing life, I have a small group of three to six people I share work with regularly. I am very lucky for that.

If anything is “American” about this poem it might be that it doesn’t employ any formal rules.

“V” was finished in that I felt it came to an end, that is my experience writing it, and though as a writer I have abandoned my working on it, it has been lucky enough to live another life in a magazine, a book, and perhaps within the imagination and experience of a few readers. Those few readers include me. When I look at “V” sitting next to me on the desk it is hard to understand that I was the person who wrote it.
Posted by Brian Brodeur at 12:39 PM