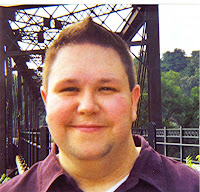 James Allen Hall is the author of Now You're the Enemy, selected as a winner in the 2007 Arkansas Poetry Series and published by the University of Arkansas Press in 2008. Hall teaches at the State University of New York -- College at Potsdam.


PORTRAIT OF MY MOTHER AS THE REPUBLIC OF TEXAS

After my mother won independence in 1836,
she dysfunctioned as her own nation, passed laws,
erected monuments to men who would never again
be slaves to order and pain.

Remember the Alamo? That was my mother.

Then in 1845 that always-pleasing church-mouse voted
for annexation. My mother had too many selves and the desire
to enslave them all. Pregnant, she was forced
to become the twenty-eighth child of the American family.
Lone star no longer.

She joined a lineage of jacked-to-jesus hair, developed insatiable
cravings for honey barbecue. Her uncles sauntered up, stroked
the thin lace of her, declared she looked mighty good.
She let them say mighty good while grinning at one another.

Nothing grew then on the prairies of my mother.

Then she learned dissent, demanded men recognize her
sovereignty. She organized an embassy in a silver trailer
shaped like a virgin bullet. My mother renamed herself
The Republic of Texas, unfurled her flag all the way

into the 1980's, when the Republic kidnapped her neighbors,
Joe and Margaret Rowe, to highlight abuses she'd suffered.
My mother was an American terrorist.

She died in the standoff. My new mother was elected
by a landslide and moved to Cuero, a city whose largesse
depends on retirement pensions. My peaceful mother
holds weekly rallies: 'What do we want? When do we want it?'

Her lipstick stains the bullhorn mauve.

In her spare time, my mother receives foreign dignitaries
and does dry-wall. The Global Conglomerate of my Mother
opened her first staffed consulate in Barcelona.
She insists visitors speak American.

Currently, the Republic is facing lean times.
The former treasurer neglected May's utilities,
refuses to return the funds. Pledge your support today.
My motherland is standing by
the rotary phone, waiting for your call.

Love her or leave her.

Picture it: Summer 2005. A friend asked me to house-and-cat-sit for her while she was away with her family over the summer. I slept there, much to my boyfriend's chagrin.

I couldn't sleep one night. I turned on the lamp, and on the nightstand was an Atlantic Monthly or a Harper's. On its back page was an info sheet about the Republic of Texas, an actual existing organization. They have an 800 number and everything.

I called the 800 number the next morning. The absurd radical nature struck me as a metaphor (especially at the emotional, if not the intellectual level) for my mother. I was off and running.

One thing about metaphor I love is that it allows us distance to speak about difficult subject matter (i.e., my mother's experience with incest and violence) while approaching both the topic and the reader very closely.

I'm a tireless reviser. When I've got the bare bones of the poem down—the information, the narrative—I start reading the poem aloud. That allows me to revise for sonic texture and image system. Ultimately, the poem went through many wringers.

There are poems that arrive, fully dressed, ready for battle, right out of the head: it makes you feel like Zeus, brain-birthing Athena. And then there are the majority of poems which arrive gradually, in fragments, or wrong-headed, or wrong-tailed, or wrong-bodied. I think that's what makes a poet a poet: the discipline and talent to hammer out the work until it isn't just fabric and mannequin: it's wearing haute couture and is the life of the party.

Like nearly all of my first drafts, it was composed in couplets, which was the skin of first publication as well (in the journal Rhino). In revision, strophes seemed to provide a kind of intelligence that tempered the ruptures in time and character. I used the monostanza, a monostitch, to layer the poem with ironic but direct statement, to push the metaphor into the reaches of Texan-mythos, and to create a conversational, nearly slogan-esque, minor tone.

One sign that I'm entering the end stage of composing is that I break the poem out of its original form. I begin reading it out loud to see what changes that triggers. I send it to friends. I try to let a poem sit a few months, though I didn't with this poem: I "finished" it and sent it out. It was the first poem I ever sent out without workshopping first, which felt liberating then: I thought I'd finally figured out what made a poem.

Reading it online today, I'm a little embarrassed by it. I wish I had waited. It was taken rather quickly and appeared six months after I'd finished and sent it out.

The poem allows fact to provide the loom-large moments: history is what's unbelievable here: monuments to remember men, taking neighbors hostage, filing 800 numbers for an organization that refuses to acknowledge the course of history.

I believe in the cornerstone of contemporary feminism: the personal is political. But I believe also in the transitive properties of metaphor: the political is personal too. "Portrait of My Mother as the Republic of Texas" attempts to make the political personal while making the personal political. All with a speaker whose finely drawn eyebrows remain arched.

Yes, though I think it shows one of my preoccupations with narrative, which is the narrative gap, the synapse between stories where poetry happens and blooms. I try to frustrate a totalizing narrative of my mother—thus the mother dies "in the standoff" and "my new mother was elected by a landslide." I can't tell stories without pointing to and exploiting narrative as an unstable and multivocal thing.

I was reading Louise Glück and trying to figure out how to end a poem by enlarging its terms. So many of her poems, particularly in Ararat, seem to end outside the poem, or at least away from where the poem began. I wasn't writing direct exercises based on this, but I was in love with her techniques.

Poetry has much to teach us, and so I feel influenced and informed, emotionally and intellectually, by many writers. A list of influences would include Mark Doty, Claudia Rankine, Wallace Stevens, Jorie Graham, Louise Glück, Rita Dove, James Baldwin, John Ashbery, Mark Strand, Rebecca Brown, Carl Phillips, Cavafy, Marie Howe, Terrance Hayes—to name more than a few. There are incredible younger poets like Jericho Brown, Cate Marvin, Tracy K. Smith, Michael Dumanis, Richard Siken, and too many others to name, whose work also provides that necessary kind of driving inspiration.

For me, the poem is always an interior voice talking to a more interior, ignorant voice.

A few writers I had the lucky coincidence of meeting and befriending in graduate writing programs regularly read new drafts, and I couldn't be more thankful for them. I also show my work to my younger brother, whose memory is usually better than mine.

This is the only comic poem I've managed to write, though the poem's tinged with sadness, perhaps. That last line does graduate beyond deadpan into sincerity. And though the other poems in Now You're the Enemy sometimes utilize humor, none of them do it to the degree that "Portrait of My Mother as the Republic of Texas" employs. There's a dialectic of "funny" in the poem: swerving from slapstick to arch irony to deadpan.

Its subject matter, obviously. I mean beyond the story of Texas politics. I mean the story of my mother's generation of American women: how their demands have had to be radical, how ludicrous they've seemed to men, how separated they've had to be to survive. How it is the "you" that has to decide to love or to leave.

I hope that the intersection of history and sexual politics—and the ways in which I deploy irony in service of narrative epiphany—are American as well.

Abandoned on the roadside, the poem is sticking out its thumb, Austin-bound, pulling up the hood of its raincoat in the middle of a summer rainstorm out there in the Texas hill country, the shine on its belt buckle almost blinding you behind your windshield.
Posted by Brian Brodeur at 3:48 PM