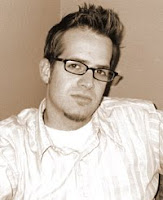 Brian Barker’s first book of poems, The Animal Gospels, won the Tupelo Press Editors' Prize and was published in 2006. He teaches at the University of Colorado-Denver where he co-edits Copper Nickel. Learn more about his work at his website.

When I dare at last to imagine hunger,
see a farmer wandering his parched fields
knowing nothing to do, finally, but sleep
the day out in the barn's long shadow,
dreaming of the family dog he drove
deep into a neighboring county
and abandoned by the side of the road.
Weeks later a boy finds it in a ditch—
timid and gimp, a halo of gnats
festering between its swollen testicles
and wormy flanks—and he coaxes it
into some pines, tethers it with a tentstake
and a chain as the late summer light
spirals and drapes over the branches,
a mirage the dog slavers and snaps at.
Consider the boy's amusement
as he imagines the animal jerking the light
down and the ruckus of bells that clang
and catapult from the treetop belfries,
the canopy rent like a piñata, spilling licorice
and circus peanuts, coins and fluttering dollar bills.
The real possibilities are beyond him.
The dog as a parable of pain or loss.
Hunger as some small iridescent thing at work
inside the animal, hovering around its heart
the way a lone dragonfly skirts the dry pond crater,
dismantling the day—light unstitched
from dust, dust unbuckled from air.
By now, the dog's given up, and the boy
watches its tongue loll in the pine needles,
the heave and fall of its stomach, its eyes
following birdflight in and out of the shade.
Restless for something he cannot name,
he imagines the music he might make
if he thumped the dog's belly like a drum.
Imagines its eyes are the color of iron.
Imagines the unimaginable and does it,
the tire tool and the belly unwilling instruments,
and the dog's caterwaul is not like music
at all and when night comes the cricketsong
dulcifies nothing, the dog's body
is just a body, is not paltry, is not glorified.
What hunger is this that haunts the boy,
that haunts the man sleeping in the shade?
Watch as the dragonfly dips into his open mouth
and keeps going, a blur between bone and sinew,
a wet thread collapsing soft caverns of flesh,
gone to where his body is a field
honed by sleeves of sunlight,
to where the boy ceases to be and the man wakes.
He knows what flits through him now
keeps the time with its thrumming,
carrying him away from himself
into himself, to where the dog roves in the shadows—
ravenous, luminous—its tail bobbing
in the heat, a winnowing sliver of light.

This poem began in the fall of 2002. During the late 1990s my sister and brother-in-law worked as house parents at a group home for troubled teenagers. One day two of the boys living at the home found a stray dog and tied it up in the woods to see how long it would take for the dog to starve to death. Luckily, some of the other children told on them and my sister was able to rescue the dog and take it to a shelter. The story, though, haunted me, and I carried it around in my head for several years before I tried to write some version of it. A sensational story by itself doesn’t make a poem, and I needed time to figure out the larger philosophical underpinnings of the event. Ultimately, I began to think about the poem as a meditation on hunger, or a place where two types of hunger—physical and psychic—collide. Thus, the opening line of the poem is a nod to that meditation and a rhetorical gesture that clears the space for the story to be told.

A ton of revisions. I always revise obsessively, and in this case, I was trying to write a type of poem that I had never written before. I wanted the imagination to drive the poem and to take leaps. I wanted a tension between the real and the surreal and for the poem to have a kind of mythic heft. So, there were a lot of false starts and missteps. An early draft of the poem also had a different ending that I knew wasn’t right, and it took many tries to write through it to the ending the poem has now.

I don’t really believe that any poem manifests purely from inspiration. There can be a mystery to writing when it’s going well, when all self-consciousness falls away and images swim up from the subconscious. You feel completely submerged and being led by the poem to some unknown place. But to say that the poem is being “received” is to ignore all the sweat and tears that came before: all the books that you read and studied and absorbed and all of the many, many more poems that you tried to write but failed. And in those failings, everything you learned about language and craft and stored for the future.

I think that I knew from the beginning that the poem needed to be in one block. The one stanza block suggests a seamlessness that helps in weaving the two narrative threads.

About a year. I finished the poem sometime in 2003 and it appeared in Poetry in the fall of 2004.

I probably don’t let poems sit as long as they should. Sometimes, after sending a poem out for some time and having it sent back, I’ll look at it with a colder eye and see what’s not quite right. However, I often work on a single poem so obsessively I usually need some way to let it go so I can go on and work on another poem, or take a nap. Sending it out to journals is a way of letting go.

The fact of the poem is the true story of two boys tying a stray dog up in the woods to see how long before the dog starved to death. This story has been fictionalized as the poem warranted. I don’t really believe that poems should “negotiate” between fact and fiction. I tell my students that the only fidelity you have is to the poem, not to the way things happened. The only truth that matters is the large intellectual and emotional truth the poem is trying to discover, and the route the poem takes to get there might often meander a great distance from “the facts.”

A lyric-narrative poem. The poem is a narrative. A story is told, characters are present, and the poem moves through time. But the narrative has been lyricized through heightened diction, metaphor, repetition of structure, etc.

I was reading Brigit Pegeen Kelly’s Song and being mesmerized by the incredible title poem of that collection. I wanted to write a poem like Kelly’s, a kind of dark fable. And I certainly discern other ways that Kelly rubbed off on this poem, especially in the pacing and the way the poem uses repetition.

When I first begin working on a poem, I don’t think much about audience. I’m interested mostly in the pleasure of the process—the serious play that the act of creation demands. In later drafts, I begin to think of a particular audience—my wife, my friends, my teachers, strangers—and how they might react to parts of the poem that are nebulous or excessive. My imagined audience, then, becomes a corrective to the over-indulgences of early drafts.

I trade poems with my wife, the poet Nicky Beer. She’s an incredibly intuitive and smart reader of my work. She understands what I’m trying to do in my poems, and she’s honest when something is not working. Every poem I’ve written in the last nine years has her touch on it, and for that I’m extremely grateful. Often people ask us what it’s like to be married to another poet, as if they think we sit around and talk in rhyme, or that we compete with one another in daily sonnet writing contests. Our standard response has become that it feels like cheating. I get to walk down the hall and hand off a new poem to my most trusted reader. I’m spoiled.

Aesthetically, it’s very similar to many of the other poems in The Animal Gospels. I think all of my poems have a similarly robust imagination and attention to language, though the poems I’ve been writing the last four years are much different in both subject matter and tone.

Perhaps the landscape. Given the mythic nature of the poem, I hope that it transcends a particular time and place.

This poem is finished and abandoned.
Posted by Brian Brodeur at 11:05 AM