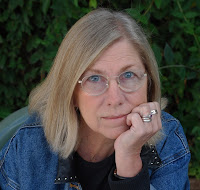 Corrinne Clegg Hales is the author of three full-length poetry collections, most recently To Make it Right, winner of the Autumn House Poetry Prize for 2010 (Spring 2011, Autumn House Press). Her previous books are Seperate Escapes, winner of the Richard Snyder Poetry Prize (Ashland Poetry Press) and Underground (Ahsahta Press). She has also published two chapbooks: Out of This Place (March Street Press) and January Fire (Devil's Millhopper Press), and her poems have appeared in Hudson Review, Ploughshares, Kenyon Review, Prairie Schooner, Southern Review, Notre Dame Review and many other journals.  Awards include two fellowships from the National Endowment for the Arts, the Devil's Millhopper Chapbook Prize and the River Styx Poetry Prize. She currently teaches in the MFA Program at California State University, Fresno.

Her bare feet flat
on stone pavement, she faces
the camera almost naked.
She must be very young,
no hips, no waist, breasts
barely budding on her chest.
This is probably Egypt,
the exhibit note says, and the girl
was brought here as a slave
from central Africa.
She is caught again
at this moment on salted paper
which will give her eternal life
in European galleries
and art books, and keep her
at this age—safe as she will ever be.
It’s a kind of seduction, really,
convincing the girl that she won’t be
hurt, that she might even like it,
and placing her body just how
he wants it, gently, even tenderly,
and then asking her to be
completely still. Don’t move.
This is how I want you
to stay forever. Please
don’t move a hair. I wonder
why she complies, what she’s
thinking, and I wonder what
the photographer wants me
to see in this girl. I think
of that other photo, a hundred years
later, of a girl about this age
running, screaming, her body
on fire, down a war-pitted road
halfway around the world,
and the four seconds of film
from another war, taken
of a young mother on Saipan
who looked at a camera mounted
on a rifle stock and believed
the photographer aimed to kill her,
or worse, and in fact, he catches her
running toward the cliff
and keeps filming as she throws
her two babies and then
her own panic-driven body
into the sea, and the camera
pans down to the corpse
of a child being battered
in the water and rocks
like dirty laundry. And my own
daughter’s slim body at eleven
or twelve, how we wanted
to believe her life
was on the verge of becoming
her own—but I’m looking now
at this African girl, dark hair
chopped into straight lines
framing her face. She stares
into the future, one hand splayed
against the ancient rock wall
behind her. She stiffens,
bracing herself for the long
exposure, and her shadow,
that deformed echo,
slides down the wall.

My husband and I went to the Getty Museum in 2001 to see an exhibit of early travel photography, and this poem began with a photograph I saw there. Pierre Trémaux was a French architect and early photographer who took many photographs, mostly of buildings, all over the world in the mid 19th century, but the pictures I found most compelling were those that he took of people--especially women. He took another more famous photograph of a kneeling woman also called "Young Nubian Woman," but the one I wrote about is a young girl standing against a wall. It’s also referred to as "Fille du Dar-four." At that time, of course, photography required an exposure of several minutes, during which the subject was obliged to remain completely motionless, and the exhibit note at the Getty contained a quote by Trémaux about his experience taking pictures of the people he encountered in his travels:

"Photographing [native] people represents great difficulties, because unlike
drawing, [photography] cannot be performed discretely. It is a matter of
persuading them to pose, which they fear doing . . . ."

I’d always been fascinated with the history of photography, and I’d recently been exploring the idea of the camera used as an implement of power--and this photograph, along with Trémaux’s comment, provoked some very complicated questions about class and cultural privilege and power.

Probably twenty or thirty revisions. I had trouble with it—and I tried to give up on it several times, but it just kept eating at me until I finished it. It probably took six months to write.

Well, I feel like "inspiration," at least for me, generally follows a lot of hard work. I wrote this poem during a period when I was obsessed with the uses of photography—reading a lot about it and looking at lots of examples. I was trying to write about what has become the art of photojournalism. I was particularly looking at war photography, and I was taking a lot of photos myself. I was trying to figure out in what ways the advent of photography might have altered our perception, might have expanded and/or limited our understanding of the world we live in. So you might say I was ready to encounter this photograph. I had done lots of pre-work. But the poem still took several months to write.

Well, I stayed too focused on the specific photo for a long time. I kept trying to make it all about that one girl. It wasn’t working, so I put it away and worked on other things for a while. One day, I was watching a documentary about the filmmakers who traveled with the troops during WWII. One of them told the story of watching women and children jump from the cliffs at Saipan while he was filming them, and the documentary included the actual clip. I knew instantly that belonged in this poem. And then the rest of it came pretty quickly—the strange connection with war photos seemed to be what it needed.

It varies. If I’m pretty sure about it, I will send it right out. But if I have qualms, I wait for a week or two. The older I get, the less interested I am in letting them "sit" for a while. They really don’t get better with age--and I just get older while I wait. So, I tend to do my best and trust it (which doesn’t mean I don’t sometimes revise after I’ve sent something out in the mail—or even after a poem’s been published).

Well, obviously I knew very little about the girl in the photo, so I imagine her situation. I really don’t worry too much about negotiating that line—in any poem. There actually is such a photo; I actually do have a daughter. I start with that, but I believe that the most complex and profound truths are usually arrived at when we allow our imaginations to interact with factual truths. I also believe that facts can lie. So—many of my poems are fictional at least in part. Poetry is not autobiography, not journalism, not textbook history. I understand poetry as an imaginative art, and at this point in my life, I value the power of the imagination as much--or more--than I value any set of facts.

No. I’d say it’s more like a meditation or an observational poem.

I remember that I was reading a lot of Susan Sontag and Wright Morris and others on the art of photography, and I was immersing myself in depression era and WWII era photography. I don’t remember what poets I was reading at the time, but I’m sure Muriel Rukeyser was in my head.

No. I just hope for a curious reader who has an open mind and an open heart.

Oh yes. I have a few trusted readers who usually read my drafts. One of my best readers is my husband John Hales who is a creative nonfiction writer and an excellent poetry reader. He will tell me when the thing isn’t ready yet—where the problems are.

I guess it’s less apparently personal than many of my poems. I do have a tendency to write a first-person situational poem that has the feel of memoir or personal disclosure. This one doesn’t really go there except for the brief mention of a daughter.

I’m not sure, other than it was written by an American, but I do I believe that problems of cultural dominance and appropriation are questions that many American writers struggle with.

Oh I don’t know. I’d say it was finished, but even now I see little things I’d like to change.

Posted by Brian Brodeur at 5:23 PM