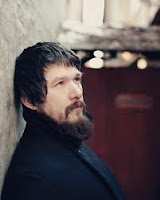 Jesse Ball is a fabulist of the latter part of the twentieth and early twenty-first century. His many prizewinning works run through the fields of poetry, fiction, non-fiction and art. Most recently he is the author of The Curfew (novel) and The Village on Horseback (omnibus). He teaches lucid dreaming and general practices at the School of the Art Institute of Chicago.

Lester and Burma were speaking gaily. He had encountered her in the hallway. Hello, he said, you certainly are a sight for sore eyes. They proceeded to a room adjoining that hall, where a large window opened onto the street. I would like to have you for supper, said Burma, and took off her dress.

I am appalled, said the doorman to the coachman, and the coachman to the gardener, at the way the young lady dosports herself. You would think she had been brought up better than that.

Burma was wearing no underwear, and her slender body looked very nice on Lester's sofa. He said so. Thank you, said Burma. I swim each day, and use fine oils. Of course you do, said Lester.

A cloud of bees overtook the window and screened the room for a minute. Do you think they'll harm us? asked Lester. Why, no, said Burma, they're just curious. Aren't you ever curious? Yes, quite, said Lester, laying his hand upon her thigh.

The beekeeper paused by his hives. A cloud of bees is missing, he said, to no one in particular. I hpe the little creatures aren't up to any mischief. I hope they return by dark so I can tuck them in their little beds and read them fairy tales.

In the spring of two thousand and three. In a basement room with a glimmer of light through some sort of absurd duct poking up onto 125th street in Manhattan. I was attending graduate school at Columbia at that time.

The mind runs on particular courses. Should such a course be presentable, perhaps it is a poem.

Delight. All labor, all love in useless, ample delight.

I did more of this sort of thing before March Book, and more after. Prose that isn't anything, that doesn't believe it has to be anything. It is an arrow approaching its target on foot, unannounced.

I believe the book appeared a year later, from Grove Press.

I most often write in volumes, so it is a matter of the publisher's will to action.

Poetry is non-fiction. Poems are battle-reports fresh from the field. You must wipe the blood off them to read the hastily written words. Also, poems are inventions, having nothing to do with anything. They are like the kisses girls give to imaginary crocodiles, if such crocodiles, if such girls exist.

Some would say so. But not very much happens. Do things need to happen?

Well, then I was mad about Proust.

That person who is always walking back and forth to the mailbox to see if the mail has arrived.

Once things are done, I tend to show my wife. But in two thousand and three, I hadn't heard of her yet.

It continues the continent's true heritage: that arrival must extinguish something. Somewhere another poem has been snuffed out. No, I suppose, I don't find that I am particularly American. Do you have to be, just because you were born here? I like the American transcendentalist tradition. I like free thought. I like Paul Morphy and Henri Darger. That's my America.

Abandoned into print.
Posted by Brian Brodeur at 5:58 PM