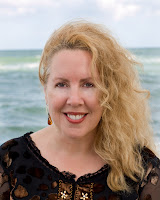 Denise Duhamel is the author, most recently, of Ka-Ching! (University of Pittsburgh Press, 2009), Two and Two (Pittsburgh, 2005), Mille et un Sentiments (Firewheel, 2005) and Queen for a Day: Selected and New Poems (Pittsburgh, 2001). A recipient of a National Endowment for the Arts fellowship, she is a professor at Florida International University in Miami.

When I was twenty, I kissed a man
much older than I was. My drunk hand found
a strange indent and lump of flesh
on the back of his waist, an extra little potbelly.
I quickly moved my fingers away and grabbed
onto his shoulder instead. After the kiss,
the man immediately told me he was married. For years
my memory had it that I slapped him and left the party,
a friend's cramped Beacon Hill apartment.
But now I think what happened
is that he began to cry, just slightly, so that at first
I thought his wet eyes had something to do with an allergy.
Then he said he really loved his wife and needed
air. We took baby steps, holding hands,
through the slippery cobblestone streets,
snow settling on my eyelashes, in his beard.
We slipped into a diner where our coats and scarves
dripped puddles onto the floor.
He told me a long story about married life--
her chemotherapy, how he'd just lost his job.
I sobered up and looked at my plate of pale scrambled eggs,
what I imagined cancer looked like,
what I imagined fat looked like under the skin.
I poked my fork around, curious
to see that spare tire, that love handle of his.
He kept blowing his nose, his cheeks fat and pink
like the soles of a newborn's feet.
The rest of him looked lean in his wooly sweater,
then he seemed to shrink even smaller
as he put back on his oversized overcoat to walk me home.
I felt rejected when he left me at my door
and disappeared into a flurry, thanking me for listening.
The story I told my friends who were at the party
was that OK, he was kind of cute, but I was
no home-wrecker. The story I told myself
was that I'd have never done anything like that--
his wife had cancer for god's sake.
Now that I look back, the man was probably only
in his late thirties, about the age I am now.
He had no money so I wound up covering our diner check,
emptying the last of my change on the table for too small a tip.

I wrote this poem in 1998 and, if I remember correctly, the genesis of it was started in free writing, something I’m very fond of doing.

I don’t save all my drafts, though I know I should. I remember at some point the poem was longer and more talky and embellished. At one point it may have even been a prose poem. Maybe this poem developed over a couple of months.

I do believe in inspiration and the muse. But I also believe you have to meet her halfway, show up everyday whether she shows up or not. As a writer, you (I mean, I suppose, I) have to be there to receive her whims. I write a lot of pages that never wind up in poems. When I reread my free writing, often a draft of a poem is there proceeded and followed by gibberish or cliché or nonsense. Then I excavate the draft and begin revising. I don’t believe in sweat and tears associated with writing because I love writing so much. I think of it as high-octane play and fun.

The poem arrived with some line breaks—but with a lot of chat that had to go. I tried the poem in prose, but I thought the first line played well against the title, reversing the title if you will, so I settled on lines. Other than that I didn’t try anything too clever with the line breaks…I think at some point I had "We slipped" moved up to end line sixteen to get in sin and sex and innuendo, but then thought better of it. Instead I phrased the lines by breath and hesitation. I wasn’t writing very much formal poetry at the time, but there are internal rhymes throughout.

About two to three years. I just checked my notes and it was rejected four times before it was accepted to Harvard Review.

I usually like to wait a couple of months between when I think a poem is finished before I send it out. Sometimes there is something glaringly wrong or embarrassing in a poem that I don’t catch in the flurry and joy of writing it.

This poem is about memory and faulty memory and the stories we tell ourselves until we can face our truths.

In 1998 I was probably constantly reading Ai and Sharon Olds.

Yes, a friend of mine. We don’t share our poems anymore, but we did for years and I always think of her after I write a poem and imagine her reading it.

Yes, I would have shown this poem to my friend at the time. We used to let each other read all our poems before sending them out in the world. We didn’t really even critique so much as to affirm to each other that we’d written what we’d written.

The setting, the diner, the disclosure.

I say finished.
Posted by Brian Brodeur at 3:03 PM