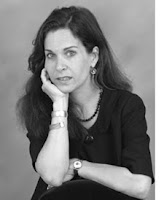 Nicole Cooley grew up in New Orleans and now lives outside of New York City. She is the author most recently of two collections of poems, Breach (LSU Press 2010) and Milk Dress (Alice James Books 2010). She has also published two other collections of poems and a novel. She has received the Walt Whitman Award from the Academy of American Poets, the Emily Dickinson Award from the Poetry Society of America, and a National Endowment for the Arts Grant. Her work has appeared in The Paris Review, Poetry, American Poet, and Callaloo, among other journals. She directs the new MFA Program in Creative Writing and Literary Translation at Queens College-City University of New York where she is a professor of English.


I’M STARTING TO SPEAK THE LANGUAGE

of disaster, he says and we keep driving through Mississippi,
Highway 90, Hurricane Alley, on our way to New Orleans,
while Johnny Cash sings, Go on, I’ve had enough.
Dump my blues down in the Gulf.
And he says, that one’s blue-roofed, that one’s gone,
and we stop to see an address on a tabletop leaned
against a tree, a FEMA number spray-painted on wood.
There’s no house. Private Property. Keep Out. Do Not Demo.
We are here together on a tour of the Gone: three porch steps
For Sale By Owner, a beached trolley at the edge
of the road like a huge stunned animal -- Tour Historic Biloxi!—
Gulfport Economy Inn. IHOP. Jefferson Davis’s Beauvoir House.
All that’s left of an address he calls the new lexicon,
the spray-painted X, the house marked O,
Dog Found. Stone foundation threaded with weeds
that are no language. Still, you can tell
where a house once stood, he says, by the clearing.
A front gate is For Sale by Owner. All that’s left
of an address. Missing a whole story.

This poem was written in the early fall of 2006. It was sparked by a drive on the Mississippi Gulf Coast that I took with my husband and two young daughters that August.

We drove from Florida to New Orleans, where I grew up, on Highway 90, now called "Hurricane Alley" for the devastation wrought there by Hurricane Katrina and its aftermath, on August 29, 2005. We were headed to New Orleans for the first anniversary of Katrina.

Because I grew up in New Orleans and because my parents still live there--and remained there during the hurricane--I had witnessed the destruction of New Orleans and its outlying parishes. I thought that what I saw in New Orleans when I came back two months after the storm was the worst thing I'd ever seen in my life.

Then we drove through Mississippi. I sat in the car, writing down everything I saw: the ruined towns, the missing houses, the stunted trees. I didn't know what I would do with the images but I had to record them.

Then in the fall of 2006 I started writing my book of poems Breach about the hurricane. This poem is part of that project.

Many versions, many revisions. To be honest, the first draft of anything I write is terrible. I'm not saying it to be self-deprecating. It is true. Above my desk I have a quote from Marvin Bell, something he said to me in grad school: "If you have writers block, lower your standards." Since he said that, I've never had writers' block. I tell myself, I can always write a bad poem.

I don't believe in inspiration. (I love telling my students that--everyone is always shocked.) If I sat down and wrote a poem only when I felt like writing a poem or when I felt inspired, I would have written maybe one poem in my life.

What I believe is that to keep yourself writing, to fully live a writing life, you have to do whatever it takes to keep the engine running, so to speak. For me, that means: writing when my students write in class, writing on the subway, assigning myself writing exercises, forcing myself to sit at my desk and write.

With this poem, I did, in two respects. First, the poem was greatly influenced by the conversation my husband and I were having in the car as we drove. He observed how disaster generates a new language--the X and O written by the National Guard on the flooded houses to show whether or not bodies were found, the signs "Do Not Trespass" in front of a missing house. We talked about how the signs do and don't tell the story. They bear witness and yet there is so much unsaid. I wanted that to be part of the poem not just thematically but formally: to use a fragmented structure in a tight, dense poem.

Secondly, I wanted the title to elide into the first line, for similar reasons. After I began to see what the poem was about (after a bunch of truly awful drafts--I was not thinking of any of this initially) I wanted to convey a sense of the reader having no way out, of being trapped in this new language.

It followed my usual process: bad early drafts, excitement at seeing what the poem was truly about, as the poem emerged, lots of revision.

It appeared in The Paterson Literary Review and in my book a few years later.

My practice varies but never do I write something and immediately submit it. I don't trust my judgement. I either love or hate my work when I first write it, and I don't trust either reaction.

That is interesting. The poem comes out of fact--the facts of Katrina and what it did to the Gulf Coast and the devastation of communities and lives. And I also think to write about Katrina you must be faithful to the facts of the historical event. It would be irresponsible to write about the event without knowing all the facts--doing the research, knowing the communities, talking to people who survived the storm and the flood.

Yes, though I wanted the narrative to be chopped and fragmentary but, still, because the poem describes a drive, moving through time and space, there is an underlying narrative impulse.

I was reading two of my favorite poets, Muriel Rukeyser and CD Wright. Both write a poetry that is so engaged with the world, sometimes termed documentary, always questioning official histories, and always changing the way I think about language and what the category of "poetic" can mean.

Anyone! I'm thrilled when people who do not usually pick up a poetry book read my work. Last year, I was fortunate to have my books taught in several non-English classes at different universities--Global Affairs, an interdisciplinary seminar on the oil spill, and a class on the archive--and it was wonderful.

Yes. My husband (not a poet--he works in human rights and genocide studies and is an academic), my sister (not a poet, works in theater), my dad (Peter Cooley--a poet and a merciless critic of my work! as I am of his), and my dear poet friends Julia Kasdorf and Kimiko Hahn.

It is a lot shorter than most of my poems. (In early bad drafts it was very long.) I work very hard at not repeating myself. I don't want to write the same poem over and over for my whole writing life.

I think it's American because it focuses on one of the great American tragedies of the century: the way we treated the people of the Gulf Coast and their communities when Hurricane Katrina hit. Our country's non-response. The people's horror that they had been essentially abandoned and forgotten. And I worry our country is now forgetting this too, not even six years after it happened.

I would say finished because it is published, but the situation it is about continues--the ruined Gulf Coast--and I keep writing about that.

Posted by Brian Brodeur at 5:50 PM