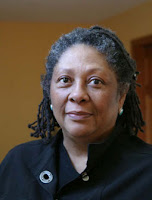 Marilyn Nelson's collections of poetry include: The Homeplace (1990), The Fields of Praise: New and Selected Poems (1997), Carver: A Life in Poems (2001), Fortune's Bones: The Manumission Requiem (2004), A Wreath for Emmett Till (2005), and The Cachoiera Tales and Other Poems (2005). Her most recent books are picture-books: Beautiful Ballerina (2010) and Snook Alone (2011). Nelson was Poet Laureate of Connecticut in 2001-2006. Other honors include three honorary doctorates, two Pushcart prizes, two creative writing fellowships from the National Endowment for the Arts, a Fulbright Teaching Fellowship, the 1990 Connecticut Arts Award, and a Guggenheim Fellowship. She was professor of English at the University of Connecticut in Storrs from 1978 to 2002, and professor of English at the University of Delaware from 2002 to 2004. From 2004 - 2010 she was founder/director of Soul Mountain Retreat, a writers' colony. She is Professor Emerita at the University of Connecticut.

Which reminds me of another knock-on-wood
memory. I was cycling with a male friend,
through a small midwestern town. We came to a 4-way
stop and stopped, chatting. As we started again,
a rusty old pick-up truck, ignoring the stop sign,
hurricaned past scant inches from our front wheels.
My partner called, "Hey, that was a 4-way stop!"
The truck driver, stringy blond hair a long fringe
under his brand-name beer cap, looked back and yelled,
"You fucking niggers!" And sped off.
My friend and I looked at each other and shook our heads.
We remounted our bikes and headed out of town.
We were pedaling through a clear blue afternoon
between two fields of almost-ripened wheat
bordered by cornflowers and Queen Anne's lace
when we heard an unmuffled motor, a honk-honking.
We stopped, closed ranks, made fists.
It was the same truck. It pulled over.
A tall, very much in shape young white guy slid out:
greasy jeans, homemade finger tattoos, probably
a Marine Corps boot-camp footlockerful
of martial arts techniques.

"What did you say back there!" he shouted.
My friend said, "I said it was a 4-way stop.
You went through it."
"And what did I say?" the white guy asked.
"You said: 'You fucking niggers.'"
The afternoon froze.

"Well," said the white guy,
shoving his hands into his pockets
and pushing dirt around with the pointed toe of his boot,
"I just want to say I'm sorry."
He climbed back into his truck
and drove away.

I told the anecdote as part of a conversation over lunch with some of my colleagues in the English Department at the U of CT. I’d told it several times before, as part of my repertoire of personal anecdotes. Some of my colleagues asked, after laughing, whether I had ever written the story down. They insisted I should write it; that it was "a poem." I wrote it that evening, essentially as I had told it. That’s why the first lines provide a seque from the conversation that brought the incident to my mind.

I wrote it very quickly, not my normal painstaking multi-revision process. The story was part of my repertoire of funny stories, so I just wrote it as I had been telling it.

I do believe in inspiration. I do not feel this particular poem is the product of inspiration.
Or perhaps I could say this poem was 100% "received."

I employed very little conscious "artistry" in the writing of this poem. Frankly, it feels to me more like prose broken up to look like a free verse poem than it feels like an actual poem. Though of course I employed my best ability to write well.

See above. My poems, even free-verse poems, are usually quite a bit more consciously "shaped" than this one is. In this one, all I’m doing is telling the story pretty much as it happened. I did change the situation slightly – in actuality, the other cyclist was my former husband, who is a blond German.

I think I only included it in my "new and selected" poems, so it was not published immediately.

I used to be eager to see my poems published in journals; I needed that sense of verification. Now I seldom send to journals, partly because most of my poems are written as parts of long narrative projects, most of which are already under contract to be published as young adult books, and publishing too many poems in "adult" journals would disqualify the books for some important young adult book awards.

As I said above, I did change the story slightly, to imply that both of the cyclists are black. That makes it a better story. I also refrain from giving the information that this happened in a small town in Minnesota: most people seem to assume it’s in the South. But my two "changes" are entirely unspoken and implied. All of the details are described as I remember them.

I don’t remember. I think I wrote it when I was well on my way to being a committed
formalist poet. I doubt that any poet I was then reading influenced this poem.

There were no multiple drafts of this poem. There have been individuals with whom I’ve shared early drafts of poems. For a while, my second former husband. For a while, my friend Marilyn Hacker. My friend Pamela Espeland. Various other friends. Sometimes my editors.

I find it relatively shapeless and lacking music.

Posted by Brian Brodeur at 5:43 PM