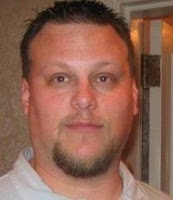 Gary L. McDowell is the author of American Amen (Dream Horse Press, 2010), winner of the 2009 Orphic Prize in Poetry. He's also the author of two chapbooks, They Speak of Fruit (Cooper Dillon, 2009) and The Blueprint (Pudding House, 2005) and co-editor, with F. Daniel Rzicznek, of The Rose Metal Press Field Guide to Prose Poetry: Contemporary Poets in Discussion and Practice (Rose Metal Press, 2010). His poems and essays have appeared in journals such as Colorado Review, Hotel Amerika, Indiana Review, Laurel Review, Mid-American Review, New England Review, Ninth Letter, Poetry Daily, Third Coast, Quarterly West, and Verse Daily. Having recently finished a Ph.D. in Creative Writing and Contemporary Poetry at Western Michigan University, he is the new Assistant Professor of English and Creative Writing at Belmont University in Nashville, TN, where he lives with his wife and two young kids.

The distant thunder keeps beat
with the steel drummers on shore.
We push away and The Snorkeler eases
into the bay. Above us, gulls glide
westward ignoring the scraps of teriyaki
left by children, the spools of fried breads
and candied plums that litter the docks.
I taste salt with every breath.
Waves break against the hull, the soft
spray whisked back into our faces.
Dad holds onto the rail as the boat dips
and pushes, flails and falls.
I want to tame the water,
reweave the breakers into something smooth,
skin of a snare drum, tight and melodic.
Dad’s legs, so thin and weak,
shake every time we hollow, bottom-out
in the wake of a wave. He’s dying.
But we’re going deeper into the thunder until the drums
drown-out and the hairs on my arms stand.
We float toward the coral, the sharp,
ragged edges of fish bones and fossilized
lobsters, to where the gulls
can’t feed, too far from shore,
so instead they keen and whine.
The ocean is too cold, the lightning
will not strike us, but the boat is turning
back. Dad’s gaunt hips and swollen middle
set against the steel blue storm
remind me that we’re all flesh,
all boom, and I want to push him in
hard and unashamed.

"Snorkeling" was composed during the first year of my MFA program at Bowling Green State University in late 2005. It was one of the first poems, of any merit anyway, that I wrote with some idea that fathers/fatherhood would be a major and obsessive theme in my work. The poem derives its narrative and emotional impetus from autobiography. When I was fourteen my family took a cruise to the Bahamas. During this time, my step-father, Jim, was very sick, but the doctors had not yet discovered the cause: a malignant tumor on his brain stem. He battled stomach discomfort, vertigo, dizziness, bouts of uncontrollable "lefties" where he'd be unable to walk without veering oddly to his left, and other such neurological symptoms. But the doctors never did an MRI of his brain. The oddest thing. It was only after we returned from the trip that an MRI was done and a diagnosis was made.

Anyway, the poem started as an attempt to write about that trip, about how after days of waiting for him to feel well enough (oddly, he was feeling well when we left for the trip, which is why we ended up going to begin with) to take me scuba diving, something we'd been planning for months, we finally got on the water only to have the diving postponed because of a nasty storm. All of the loaded metaphors and images at my disposal—the boat, the storm, the as-of-yet undiscovered cancer, etc—made this poem an inevitability, I guess.

This poem went through four distinct drafts over about a three month period. I'd say that the meat of the poem was present from the very beginning, but the ending took a lot of fine-tuning. Oddly enough, I don't think I ever actually workshopped this poem at BGSU, but I did take it to my mentor's office every week for what seemed like an eternity. Larissa Szporluk, my teacher at BGSU, kept pushing me to be "honest," "tell the truth," "be angry, it's okay." I think I was initially afraid to enter the emotional territory of this poem; it was hurtful, it was scary, and it was hard to write about. But during the writing of this poem, I learned that those characteristics are exactly what would help me write the most important poems. Now I covet those feelings, work hard to find them in my subject matter, and work even harder to make sure the reader can feel them as well.

I wanted the poem to end when the speaker jumps in the water to escape the emotional turmoil of dealing with a dying parent, but it just kept sounding so damn sentimental, so damn gimmicky. I showed draft after draft of possible endings to Larissa over those months, but nothing ever seemed to work. Finally, one day we were talking about something else entirely (my memory's shaky here, but I think we were talking about Larry Levis' "Linnets") when I interrupted her and blurted out: "I push him in! I push him in!" I rushed back to my apartment and wrote the exact version you see above.

I remember deciding early on that the poem would be a single stanza, but I don't remember consciously employing any other conscious ready-made techniques to the writing of "Snorkeling." I will say that I remember having a really hard time lineating the poem at first. I just couldn't find a natural rhythm, a comfortable gait, but it worked itself out as the poem went those initial drafts.

The poem appeared on No Tell Motel, the internet lit journal, on June 14, 2006. No Tell Motel is a great venue: they publish a new poem every weekday and each poet selected gets their own week. It's a great way to really get a good taste of each poet. Anyway, the poem appeared about six months after I finished it.

I only sat on "Snorkeling" for a few days, really. Once I got those final lines squared away, I felt pretty good about sending it into the world, and since it was the last of a series of five "body" poems I was working on, I got them over to No Tell Motel right away. Usually I don't sit on a poem very long once I feel good about it, but so many times I tinker with drafts while the poems are out to magazines. I think I just like having a horse in the race, as they say.

Much of this poem's tension comes from this very negotiation. The factual and fictional elements of the poem are quite blended: Bahamas (true), dad (false: it's step-dad), The Snorkeler (false: I don't remember the boat having a name), the birds (true), the steel drums (true), etc. I felt very strongly about wanting to create an atmosphere, a tone, a setting in this poem, and so I turned to the power of the detail. Sometimes I read the poem now and wonder if it's not overdone.

I didn't set out to tell only the truth, per se, but I definitely wanted the reader to feel that the narrative of the poem was factual, was "based on real events." That said, I'm a staunch believer in Richard Hugo's dictum that "truth must conform to music." I didn't want to write a made-for-TV movie though, and so I remember hoping that the emotional center of the poem would feel natural and not sentimental or melodramatic. The negotiation between fact and fiction was certainly on my mind while working on this poem . . . while working on any poem.

I remember I was reading a lot of different things. I became, that first year of my MFA, a voracious, unsatisfiable, obsessive reader, something I try to maintain these days, too, of course. I distinctly remember going through a Larry Levis, James Wright, and William Matthews phase during that time, but I also remember a separate thread of Rosmarie Waldrop, Leslie Scalapino, and Lyn Hejinian (My Life, specifically) happening simultaneously. I was also drunk on Faulkner's prose and Bernard Cooper's memoirs at the time. Surely all of those writers converged into some kind of monstrous influence, but as to just how, it's hard to say.

I'd like to think that my ideal reader is any reader brave and confident enough to pick up a book of contemporary poetry. I know the conversation's taking place in blogs, lit journals, and classrooms all over the country, but I do wonder also about the fate of poetry in the American reading public's lives.

At the time I wrote this poem I was in the MFA program at Bowling Green State University, so my classmates—outside of workshop—and instructors there saw various version of this poem, and as I mentioned before Larissa Szporluk was a huge help with it as well.

My most trusted readers now-a-days are different than they were then, as a lot of my MFA classmates have moved into other fields. Today I definitely have a group of incredibly gracious, talented, kick-ass poet-friends who read my work regularly: Keith Montesano, Traci Brimhall, Chad Sweeney, F. Daniel Rzicznek, etc. I'm lucky in this way.

"Snorkeling" isn't too different from many of the poems in American Amen. There's an aspect of autobiography to it, and it focuses pretty heavily on the natural world even as it deals with interior obsessions, but formally the poem is one of the few left-flush, one-stanzed poems in the collection. I tend to utilize white-space a bit more.

In so much that, as Valery says, any poem can be finished, I'd say that this one was merely abandoned successfully.

Posted by Brian Brodeur at 5:28 PM