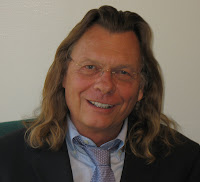 Thomas Lux's most recent book is God Particles (Houghton Mifflin, 2008). He has two books forthcoming, a collection of poetry Child Made of Sand (Houghton Mifflin Harcourt) and From The Southland (Marick Press), a book of nonfiction. He is Bourne Professor of Poetry at The Georgia Institute of Technology.

Your baby grows a tooth, then two,
and four, and five, then she wants some meat
directly from the bone. It's all

over: she'll learn some words, she'll fall
in love with cretins, dolts, a sweet
talker on his way to jail. And you,

your wife, get old, flyblown, and rue
nothing. You did, you loved, your feet
are sore. It's dusk. Your daughter's tall.

I wrote this poem over the summer of 1987 in the first few months of my daughter's life. I think it's safe to say it was her birth that started it!

Maybe ten to twelve revisions over about three to four months.

I don’t particularly believe in inspiration. I believe you need to feel something intensely enough to need to write a poem that might be telling you you need to try to write it.

I'm not sure at what point I decided to write the poem in pretty strict tetrameter nor when the rhyme scheme emerged.

Probably by the second or third draft. It was a long time ago: the baby is now twenty-three years old! And I'm happy to report she has fallen in love with cretins, dolts, etc. but never for too long.

Not sure how long or where it first hit print but the best place it appeared in print was on NYC subway cars, as part of a project called Poetry in Motion. Neither my publisher nor the sponsors of the project informed me about it so the first time I heard (no kidding) about it was when my daughter saw it in a NYC subway car and called me.

I do like to let poems sit—between working on them and after I think they're finished, because they're usually not.

Facts are irrelevant. A poet’s job is to try to tell the truth. You can bend, change, invent facts all you want to try to do so.

Can't recall who exactly I was reading then but it was history, nonfiction of all sorts, poetry. My influences are too many to name.

The ideal reader is any reader who gets a little pleasure or, depending on the poem, gets pissed off.

I probably showed it to a few poets friends then: Michael Ryan, Mary Karr, Stephen Dobyns. I remember reading it to my daughter when she was about three months old: she was unimpressed!

I think this poem is pretty much in the ballpark of a lot of my poems.

What's American about it is that's it's in American English.

This one was finished.
Posted by Brian Brodeur at 12:18 PM