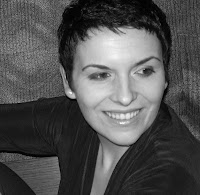 Jehanne Dubrow was born in Italy and grew up in Yugoslavia, Zaire, Poland, Belgium, Austria, and the United States. She is the author of Stateside (Northwestern UP, 2010), From the Fever-World (Washington Writers’ Publishing House, 2009), and The Hardship Post (three candles press, 2009). Her work has appeared in Ploughshares, The New Republic, The New England Review, and Poetry. She lives in Chestertown, Maryland and teaches at Washington College.

Talking about distance is a way to close
the space. Consider the bridge that curves above
the Chesapeake, which when we mention it,
becomes a child’s toy. Or that the Beltway
is not a contest of families wrapped in steel,
speeding toward collision, demanding it,
but just a road that circles on itself.
Remember when we touched at twenty-two,
so willingly aligned in one twin bed,
your spine pressed up against the wall and mine
about to break over the edge? These days,
we’re greedy in our king, spread wide although
we barely scrape together in our sleep.
We’re isolates with only water in between.
Closeness, you used to say, closing your arms
around me like a measurement of rope.
We fell asleep to Billie Holiday,
a long, sad looping of her voice that warned
not everyone is lucky in this world.
And I remember when you dressed for work,
how I hated watching as you tied each shoe,
the tight finality of laces cinched
in bows. It’s been a while since I said
the buttons on your shirt reminded me
of afternoons and evenings spent in bed,
hours now indistinct as the facing shore,
our backs like metal arches, our words moving
from mouth to caverned mouth and mouth again,
the river of our bodies murmuring.

I first started drafting this poem halfway through the Sewanee Writers’ Conference, in the summer of 2008. I had met with one of the faculty members, Daniel Anderson, who suggested that I give the poems in Stateside a little “breathing room” by writing about distance and loneliness without addressing military life directly. Up until that point, the manuscript in-progress focused explicitly on the experience of being a “milspouse,” a military wife. “Eastern Shore” became the first of several poems that broadened the project’s scope.

It was midnight. I sat on the carpeted floor of my dorm room and tapped on my laptop. It seemed like madness to be writing a new poem, when there were people in the hall laughing and drinking something southern out of plastic cups.

I revise as I’m drafting. By the time I reach the end of a poem, most of the lines have undergone about thirty to fifty revisions. This one came together quickly, and I completed a draft in one sitting: maybe three or four hours later. By the time I left Sewanee, I had the basic shape of the poem down on paper. I spent the next two months adding a comma on Tuesday and removing it on Wednesday.

I don’t believe the Muse descends and pours poems into our heads. But I do believe that, when I write every day, I increase my odds of drafting something easily and effortlessly. It’s that feeling of effortlessness—when the poems seem to arrive inside us—which we call “inspiration.” I think it’s actually muscle memory; with daily practice, our minds warm up more rapidly, and the drafts feel as if they happen almost by instinct. Or magic.

The poem is the ghost of blank verse, with a few stricter lines thrown in for spice. I’m a big fan of uninterrupted pentameter spilling down the page: no stanza breaks, no fancy indentations. There’s something so clean and naked about that shape.

The Birmingham Poetry Review accepted the poem in November 2008 and published the piece early the next year. The poem was drafted quickly, submitted quickly, and accepted quickly. Nice when that happens.

Some poems do look fully formed early on, and I just feel their wholeness, even if they’re also quite green. Those I send out within a few weeks (damn the torpedoes, full speed ahead). Other poems, the ones that take a lot of chipping and polishing and Super Glue, will usually sit in my computer for six to twelve months.

True things: that some people are afraid of the Bay Bridge, that the Beltway around DC is scary too, that my husband and I used to fit into one very small bed when we were college sweethearts, and that I went through a Billie Holiday phase.

I had a teacher who often said poems should have “both roots and wings.” So, “Eastern Shore” is rooted in the story of two people who have become distant, almost without realizing it. And I hope the images of water, circles, and bodies make the poem a little bit winged as well.

The secret of this poem is that it’s built on the scaffolding of “Meditation at Lagunitas.” Some of my favorite poems by Robert Hass are those ones in which big chunks of language spill down the page, conversational but also musical (“Between the Wars” comes to mind, also “The World as Will and Representation”). I typed out “Meditation at Lagunitas,” then began drafting my own poem on top of the original text. I often use this technique when I want to understand another poem’s rhetorical structure. The most obvious theft in my poem is “Closeness, you used to say, closing your arms / around me like a measurement of rope.” It’s an echo of that lovely joke in “Meditation”: “Longing, we say, because desire is full / of endless distances.” Of course, I hope that “Eastern Shore” is its own poem.

At the time, I was also reading and rereading Claudia Emerson’s Late Wife, which felt like an important model for Stateside, as did Glück’s Wild Iris.

Audience changes, depending on the project. With Stateside, I wrote the poems to and for my husband. We discussed every poem in the manuscript, sometimes even mid-draft. I wanted to make sure that the language I used, the images, the tropes, accurately reflected what it means to be “married to the military.” My second, intended audience was other military spouses. As soldier-poets have long demonstrated, poetry gives weight to an experience, making it seem worthier of intellectual examination. Military spouses deserve to be heard too. Their world merits art.

Again, my husband is often a first reader. I also have a “poet’s lunch” with a friend here in Chestertown. The rules are simple: a little literary gossip, some good food, and a new draft of a poem every week. And, I have several friends who live in other parts of the country; I’ll often email them when I’m in a panic about my work.

At the time, this felt like a departure from my usual voice; the ending was more open, the images more loosely woven together. I love working within the rigid boundaries of fixed and received forms. “Eastern Shore” taught me that a poem can reveal its ending, if I don’t push too hard. Not every poem needs to click shut with a rhymed couplet. I’m working on a book of prose poetry now. Perhaps, that wouldn’t have happened without “Eastern Shore.”

All that open space and distance. We have such room for our loneliness in America.

Finished. I hope (lot of hoping in these answers of mine).
Posted by Brian Brodeur at 2:56 PM