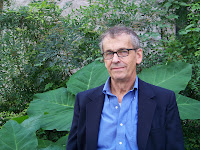 Peter Cooley is a poet and Professor of English in the Department of English at Tulane University. He also directs Tulane’s Creative Writing Program. Born in Detroit, Michigan, he holds degrees from Shimer College, the University of Chicago and the University of Iowa. Cooley has published eight books of poetry, all with the Carnegie Mellon University Press, most recently A Place Made of Starlight (2003) and Divine Margins (2009).


PHONING MY SISTER AT THE NURSING HOME

“Welcome to Diane’s Consolidated Miseries.
Diane is unavailable to take your call
but if you would like to leave a message just recall
the pitch and timbre and volume of her hostility.
Your call is important to us. If you want a tirade
against her father and mother, ninety-one and ninety-three,
press one; against her brother and his family,
press two; against the ‘entire goddamn world,’
press three; against the men who left her,
press four; against her body she’s shrunk to eighty-six
pounds, press five. The other five numbers
are screams, execrations, a witch’s Sabbath hex
against you. Remember, phoning her, you asked for it.
The machine took down your number. She’ll call you back.”

Like many of my other poems about my sister, this one was composed shortly after her death.

Probably I did about twenty drafts of this poem, and I worked on it obsessively in a two week period of time to get it done.

I believe that inspiration and blood, sweat and tears cannot be separated.

Needless to say, I employed the form of the answering machine, a piece of “material culture.”

It took several years for it to be accepted.

I did not let this poem sit for long (a month or so), though I have let poems “sit” for as much as a year.

The poem uses a received form from technology in our culture to show my sister’s madness and bitterness. Obviously, the entire discourse is “fabular”: my sister had no actual answering machine like this.

Probably it is, but in the case of lyric poetry, this is hard to talk about since feeling is more important. One can easily see in this poem that the sister’s hatred toward others is the result of her self-hatred.

Dickinson. She always gives me the courage to “tell the truth but tell it slant.”

A reader who appreciates form and dark humor.

My wife is my first reader. I then share my poems with my poetry group, composed of poets and teachers of poetry.

A Place Made of Starlight, where this poem appears, is made up largely of formal poems but in more traditional (i.e. sonnet, villanelle, sestina), received form. I invented this poem’s form.

The open expression of both speaker and his sister as well as the dependence on technology to show emotion.

It was finished since the form was so self-conscious.
Posted by Brian Brodeur at 4:31 PM