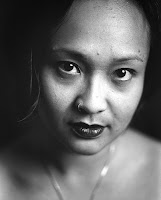 Barbara Jane Reyes is the author of Diwata (BOA Editions, Ltd., 2010). She was born in Manila, Philippines, raised in the San Francisco Bay Area, and is the author of two previous collections of poetry, Gravities of Center (Arkipelago Books, 2003) and Poeta en San Francisco (Tinfish Press, 2005), which received the James Laughlin Award of the Academy of American Poets. She has taught Creative Writing at Mills College, and Philippine Studies at University of San Francisco. She lives with her husband, poet Oscar Bermeo, in Oakland, where she is co-editor of Doveglion Press. For more information, please visit BarbaraJane’s website.


A LITTLE BIT ABOUT LOLA ILANG

During the war, the old women would still go outside the house to smoke their hand-rolled tobacco after cleaning the suppertime dishes. But so the Japanese soldiers would not see them, they learned to flip their cigarettes with the lit ends inside their mouths. They flipped their cigarettes with their tongues so fast, and we kids would try to copy them. We burned our own tongues trying. Lola Ilang used to do this, and I tried to copy her. It hurt! It hurt so much when I burned my tongue! Yes, Lola Ilang used to cook the best pochero, and foreigners thought it was a little weird to cook banana with bok choy. You use the saba banana. No other kind is sweet enough. Do you know, when she died, everyone had already forgotten how old she was? We asked her some years ago, and even she had forgotten. But I was saying about the war. No, the women did not want the soldiers to find them. You know what the soldiers did to the women here. The Japanese buried so much gold in our hills. This is because our northernmost provinces were the last places they set foot before their ships left, after their emperor surrendered. They stole this gold, Spanish gold, from our churches. You know, not too long ago, some of the Japanese who had gone into hiding were found in the hills. They were so old. They never knew how the war ended.

July 20, 2007. I just now searched my old blog and found this post, in which I discussed the Diwata manuscript revision process. At the time, I was thinking about digression in storytelling or talk story, how digression can be very much the point of the story, that the manner in which a story is told is the point, sometimes more so than the story itself. Sometimes.

This poem underwent very little to zero revision, and very little time elapsed between the first and final draft. I think this is fairly uncommon for me. I oftentimes am skeptical of “first draft, last draft,” and think of it as a justification for laziness or unwillingness to revise. That said, I also have to remember to be open to poems which arrive like gifts, and to allow myself some good duende.

Having just mentioned duende, I do believe in inspiration. As well, the word “diwata” also means “muse,” after all. As above, almost all of this poem was received, and gladly so, especially because the rest of the manuscript in its entirety was a result of much sweat and tears.

It arrived to me neatly in its digressive prose form. A great portion of Diwata occurs in prose poetry, and so the use of form of “A Little Bit About Lola Ilang” was automatic. The talk story digression I believe necessitates the continuous poetic line, rather than metered couplets or pantoum quatrains, which are other forms I utilize in Diwata. Rather than the story being ceremonial, formal, incantatory, this is the kind of story elders tell spontaneously, in the course of conversation around the kitchen table when no one is in a rush to go anywhere. Perhaps the talk story would even include a cigarette flipping on the tongue demonstration. The talk story would also include rounds of San Miguel beer, or something harder.

This poem appeared in the anthology, Field of Mirrors: An Anthology of Philippine American Writers, which was released in January 2008. It had been accepted by the editor Edwin Lozada some months before.

I don’t think I sat on this poem at all. The writing and completion of it was so fast, that there was no reason not to send it out. That said, my practices vary per project. It’s been a long time since I’ve written a poem unattached to a larger project; these days, I typically write long form, which makes submitting work for publication challenging. It’s hard to know how much context to provide in a cover letter, or even how to excerpt a long piece.

Almost everything in the poem is true, if I believe all the stories I was told! Lola Ilang was my grandmother’s spinster sister; I’m told she really did forget how old she was. My husband actually double checked with my mother on this, and her answer corroborates my poem. In the Philippines, I’d missed opportunities to look at Lola Ilang’s headstone, to verify this for myself, but I think actively doing so would have verged on biblical “Doubting Thomas.”

It’s also true, again, as far as I’ve been told, that one reason for the cigarette flipping was so that when smoking outside at night, the old ladies would not be seen, especially during the war. I was never actually told this by any specific member of my family; in fact, I can’t remember now who told me this. But stories “be” that way.

What I do not know for sure is whether foreigners really think it’s strange, to cook banana with bok choy in a stew.

Yes it is, a digressing narrative, but a narrative nonetheless.

I was reading and article, “An Old Man and His Balete Tree,” by Ronaldo O. Borrinaga, about a very old man who practiced ritual and possessed anting-anting, protective amulets which enabled him to cut down mythical balete trees inhabited by spirits. I was also reading the Book of Genesis, Bataan Death March survivor testimonies, articles on “magic” and “religion” on the island of Siquijor, and “The Engkanto Belief: An Essay in Interpretation,” by Francisco Demetrio, S.J.

The direct influences for this specific poem are my grandfather and my aunt, to whom I dedicate the book.

Not anymore. My expectations are always blown out of the water in that people I think are the least like me end up being the most visibly and vocally interested in my work, and those most like me dumbfounded and backed up to a safe distance from me. So then my idea reader would be someone who is open, who isn’t afraid of complication, who doesn’t tend toward oversimplification.

From my head, I blogged this poem, typed it directly into the dialogue box, and hit “publish,” before I realized it was a poem and that I would actually include it in my manuscript. I always share my work in progress with my husband Oscar Bermeo. He’s my external bullshit meter as my own frequently malfunctions.

I also read from works in progress at literary events, which is when I get to hear the clunks and awkward stuff that needs to be edited and tidied.

Its spontaneous appearance, the fact that it was never revised, barely edited, makes this poem different from my other poems.

Well, it takes place in a place colonized by Americans.

In all seriousness, I am thinking of Williams, “Say it, no ideas but in things.” In the blog entry in which this poem was born, I also wrote a bit about sustaining the poem’s persona, using words particular to the speaker and his/her locale, refraining from words which the speaker would not use, such as “atrocity” to describe the Japanese actions again the Filipinos during WWII.

That isn’t specifically American though.

Finished, and served on a banana leaf with a heap of fried fish and steamed rice.
Posted by Brian Brodeur at 2:41 PM