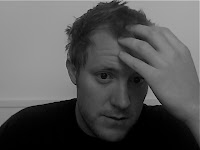 Zachary Schomburg was born in 1977. He is the author of The Man Suit (Black Ocean 2007), Scary, No Scary (Black Ocean 2009), and a dvd of poem-films, Little Blind Thing (Poor Claudia 2010). He is also the author of several chapbooks including two that are forthcoming: From the Fjords (Spork Press), and Feelings Using Wolves (Small Fires Press), a collaboration with Emily Kendal Frey. His poetry translations from the Russian of Andrei Sen-Senkov are in The Agriculture Reader, Aufgabe, Harp & Altar, Circumference and others. He has co-edited Octopus Books and Octopus Magazine since 2003. He lives in Portland, OR. For more information, please visit his blog.

You’ll return
to your childhood
home

after a lifetime away
to find it
abandoned. Its

red paint will be
completely weathered.

It will have
a significant westward lean.

There will be
a hole in its roof
that bats fly
out of.

The old man
hunched over
at the front door
will be prepared
to give you a tour,
but first he’ll ask
scary, or no scary?

You should say
no scary.


When was this poem composed? How did it start? How many revisions did this poem undergo? How much time elapsed between the first and final drafts?

I wrote "Scary, No Scary" in June of 2006. I was working in a cornfield in Nebraska at the time, breeding corn hybrids, digging irrigation troughs, and was constantly overheated and burned and bored. This is an ideal environment to write a poem. I was hallucinating these little nightmarish narrative moments most of the time, listening to Godspeed! You Black Emperor on my new pollen-dusted iPod, tying silks off with brown paper bags of pollen. When I got home I would transfer the poems from my head onto the word processor. I dreamt this poem more than wrote it. This poem in particular still appears exactly as it was first written. So each line is as it spilled out of me. I guess I wrote it in about two minutes. After I wrote this poem, it felt so pure to me, so unmanipulated and unmanipulative, that I began to write an entire manuscript from this world. I wanted to live for a year or two in this dark nightmarish journey through the woods. And so I did.

My favorite poems of mine feel more "received" than worked. "Scary, No Scary" feels entirely received. Sometimes I find myself in this place where my brain and my heart are talking to each other, and I have nothing to do with it. I'm dead. And those two parts of me have forgotten about me. This is when I'm at my happiest, when I'm dead in this exact way.

It was published in Typo #8 that summer. Adam Clay and Matt Henriksen heard me read it and they asked me for it. Typo had rejected my poems a few times before that, so I was pretty sure I was taking a break from submitting to them. So, it was pretty nice to be asked. Typo is solid.

It never sits. I don't have the patience for that. Usually, the poem I just finished writing feels like the best poem I've ever written and the world needs it before the morning comes. I don't want to wait until I see all its flaws in the morning. Why does this sound like I met the poem in a bar?

There is a very emotional sincerity at the heart of this poem (and others in the manuscript) despite a clear logical insincerity. This poem, like the rest of the poems in that manuscript are about loneliness, self-discovery, choice in the context of a search for home, whatever home might mean. Its of a dream, and as an admirer of Breton, I would argue that that doesn't negate it from being non-fiction. I have hardly written a poem any truer.

Is what a narrative poem?

I think I was just starting to read some French poets, Breton, Eluard, Reverdy, Char. And I was reading Graham Foust. It looks like a Foust poem, if you blur your eyes a bit. And Simic and Tate and Mary Ruefle. And I remember listening to a lot of Neutral Milk Hotel, Beirut, Magnetic Fields, Smiths, and Richard Buckner (and Godspeed, like I said earlier) that summer.

No, not exactly. This is kind of like asking do you think about an ideal writer as you read? I think about writing as a slow reading, the kind of reading you can get just right. I want to read the best poem. I want my life to bounce off of it just a little, send my path askew if only a fraction. I want it to put its fingers in my eyes.

I did actually, yes. Look at what I did, I said.

Well, many of my poems are prose poems. "Scary, No Scary" is a departure from that. I like to tell stories. I like the poem to be about the sentence and not the line. But when this one spilled out, it came in lines. Each line told a story. It wouldn't work as a prose poem. This poem inspired me to write that entire first section of SNS just like it. I've now returned to the prose poem and feel quite comfortable and happy there.

Nothing. There's nothing American about it.