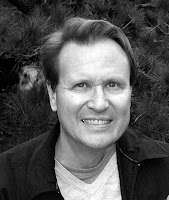 Gary Young is a poet and artist whose books include Hands; The Dream of A Moral Life, winner of the James D. Phelan Award; Days; Braver Deeds, winner of the Peregrine Smith Poetry Prize; and No Other Life, which won the William Carlos Williams Award. His most recent books are Pleasure, and Bear Flag Republic: Prose Poems and Poetics from California. His New and Selected Poems is forthcoming from White Pine Press. He has received a Pushcart Prize, a fellowship from the National Endowment for the Humanities, two fellowships from the National Endowment for the Arts, and the Shelley Memorial Award from the Poetry Society of America. He edits the Greenhouse Review Press, and his print work is represented in many collections including the Museum of Modern Art and the Getty Center for the Arts. He teaches at the University of California Santa Cruz. For more information, please visit his website.


[THIS TUMOR IS SMALLER]

This tumor is smaller than the last one, he said. I’m going to cut it out, and then do my best to stitch you back together. He leaned forward, and pulled a blade across my leg. Smoke rose from the open wound as he cauterized the tiny veins, and while he worked, he spoke to me. Every body is a machine, he said. When they break, I fix them. But there’s an art to it, he said. We have to coax some kind of magic or luck out of the body. Some patients die, he said, and others find a way to beat the odds. That’s what I expect of you. Do you know what I’m saying, he asked? I nodded while my breath kept pace with the morphine drip. Good, he said, and he put his knee on the table for a better purchase. I watched my leg jump and fall as he jerked on the sutures. That should hold, he said, but you’re going to feel it for a while.

I wrote this poem in early 2007, although I had carried the germ of the poem for more than twenty years. In my late twenties, I was diagnosed with a level-four melanoma. My chances of survival were slim. My surgeon, Dr. Fred Tomlinson, told me he would have to remove most of my scalp, some muscles, arteries, glands . . . I stopped him mid-sentence and asked, “Just how much are you going to take?” He said, “As much as I can without killing you.” It was the beginning of an interesting relationship. Tomlinson had spent twenty years as an army doctor piecing maimed Vietnam vets back together. He was a no-nonsense surgeon with great skill, a subtle wit and an inquisitive intellect. Over a period of twenty years he operated on me more than two dozen times, removing recurrences of tumors, and carving out anything that looked suspicious. Generally when I was under the knife I was given a sedative, morphine, and a local anesthetic. While the good doctor worked his magic, he and I invariably got into interesting and often heated debates. We discussed human nature, politics, the limits of love and the nature of courage among many other topics. It’s a curious business, talking with someone who’s cutting you up with a knife. It leant a certain urgency to our discussions.

This poem went through some eighteen printed drafts, and each of those was subject to considerable hand edits. All told it took about two months to complete, although I did tweak it in a couple of places several months later.

I do believe in inspiration, but I put my trust in hard work. It’s like Arnold Palmer once said, “The more I practice, the luckier I get.” Inspiration for this poem was unnecessary; a life experience was all that was needed. Inspiration may have come into play when I tried to find a compelling form for the experience, and in this particular case, when I chose what to put into the poem and what to leave out.

My last five books have been prose poetry. I started this poem in prose, and never really considered any other form. The technique I employ in my prose poems is the same one I employed in my books of lined verse: eliminate the inessential.

It appeared in the journal Quick Fiction later that year.

I let poems sit for a while before I send them out, and I always send them to a few friends for a final check before I publish them. I usually work on poems over a fairly long period of time, so when I think they’re done, they usually are.

I don’t rely much on invention in my poetry. I have no quarrel with invention, imagination, inspiration or whatever else you might want to call it, but my poetic project, such as it is, has been to render intelligible my own personal landscape. Having said that, I have to admit that I’m no slave to fact; I’m more interested in the truth. Sometimes they’re one and the same, but quite often they are not. This poem is factual, but it’s still subject to the vagaries of memory, and to artistic manipulation.

Insofar as it tells a story, however slight, it’s a narrative. What I’ve tried to do in this poem and in many others is to write a lyrical narrative—one in which a narrative arc is condensed so that it can be employed the way an image might be.

I agree with Thomas Aquinas, who says that art exists outside of morality; that’s one of its chief virtues. This doesn’t mean that art gives license to amoral behavior, only that art cannot be judged by the same measure as a person’s actions. I don’t believe that all good poetry is necessarily ethical or just. There are many wonderful poems that take delight in savaging a fickle lover, or imagining some horrible vengeance. Even so, I’ve been persuaded by Elaine Scarry’s contention that beauty encourages a sense of justice and moves us toward a greater attention to, and a concern for justice. This begs the question of whether a poem is beautiful or not, and whether a bad poem can be just, but I do like to believe that poetry is somehow a force for good.

My reading is haphazard, and my sense of time is horribly fluid. I was probably reading four or five books simultaneously in fits and starts while I worked on this poem, but I couldn’t begin to remember what they might have been.

I never write with any particular reader in mind, although there are two or three people that I hope will be pleased by what I write. I do have an ideal reader, although “idealized reader” might be more precise. I like to imagine a young man in his twenties reading my work in a library or a classroom; he’s Chinese, and he lives 200 years from now. I try to write poems that might move him.

Like most poets, I have a group of close friends with whom I share my works-in-progress, and my poems are better for their kind attention.

This poem is fairly typical of my work, although there is a strange patina to this poem that comes from my carrying it so long in my head. It may only be evident to me, but I can see an evolution in my thinking manifested here, a kind of poetic palimpsest.

The idiom more than anything. The dialog in particular is distinctly American. I frequently utilize bits of speech in my poems, those poetic gifts that we offer each other in conversation. There is a great deal of wisdom and emotional depth inhered within the most common colloquial expression, and I’ve tried to tap into that here.

I had fantasies of writing a novel or a short story about the circumstances described in this poem, but I’m not a fiction writer, and so I had to abandon that particular strategy; it was simply beyond me. For better or worse, this poem is finished. I could make it different, but I don’t think I could improve it.
Posted by Brian Brodeur at 12:30 PM