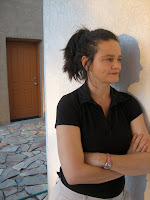 Connie Voisine is an associate professor of English at New Mexico State University, where she directs the creative writing program. Educated at Yale University, she received her MFA from University of California at Irvine and her Ph.D. from University of Utah. Her book, Cathedral of the North, was selected winner of the AWP Award in Poetry and was released by University of Pittsburgh Press. Rare High Meadow of Which I Might Dream was published by University of Chicago Press in 2008 and was a finalist for the Los Angeles Times Book Award. She lives in Las Cruces, New Mexico with her husband, writer Rus Bradburd and their daughter.

It’s old fashioned, struggling
with grace. Last night in the movie version
of “Portrait of a Lady,” Isabelle will not reveal
that Osmond is cruel. Provoked,

she might, at the most, weep into her hands.
O white skin and narrow
fingers lit by tears, all that money
was supposed to set you free.

Those days it was enough to worry
about marriage—it was fate. End up
with an Osmond and the rest of your life
equaled grief and its awful seductions.

These days marriage’s not enough
so this world delivers
lessons everywhere about humility.
The doctor sends sound waves

dyes, and tubes into you. A benign tumor
is measured, your car fills with rain, a neighbor
asks for money.
There’s a dark night and the edge

of what you feel is possible, a call
to grace while the days give up their
black yolks, the smudge that opens up
nothing so dramatic as not living,

only the likelihood of doing without.
The landscape shimmers with
fear. You try to stay unemphatic.
The oleanders are blooming

and heavy with hummingbirds
and you should not have, ten years ago, done
all those things which leave you
hands empty now. On a Zen tape, the master says

when I was young I was a tiger
and now I am a cat. It is better to be a cat.
I think of the brutal tiger,
the slung hips and thumping tail,

the coiled rump, that mouth.
I think of my ex-cat, neat whiskers
patient at the door. What glamour,
the tiger in all its teeth. I think I have

made a mess. I was reading
some poems, a series addressed
to the poet’s friend who fell into a coma
while traveling in China, one from which

he never awoke. The poems are
about kindness: the times they carried his body
to the garden to sleep in the trees, the music
they played and the stories they told

what was left of a man named Steve.
They are poems I cannot recall without weeping
because if I were to stop living now—what regret
I feel. It soaks me like a fog

imperceptibly heavier each day. The burden,
what I should have done better, the opportunities
I pissed away, like Isabelle Archer, given fortune
(of a sort), beautiful youth

and desire. Am I Isabelle Osmond
who now knows better as she kisses
her dying cousin? Maybe regret is the final rebellion
of the puny, the only grace we can manage,

the edge we worry between despair and stepping
through. Maybe I should not have done it is how
we can say to the ways things are now
sorry, I don’t like you.

I was driven to write about regret, classic lyric poetry fodder, but I wanted to question its function. How does regret work? How does it serve a person?

Because I am a slow writer this one took a long time, they all do.

I find that poems often start with a particular constellation of information that seem connected intuitively but the poem emerges as the connections become a little more conscious. I write to understand why and how all the parts fit: Portrait of a Lady, medical testing, my mellowing into wanting peace rather than drama, the sudden death of someone I did not know, but could not forget, etc. All the parts have been there since the beginning but I didn’t know how to join them.

I am, as I said, a slow worker. The first draft is dated 2004, while I did not work on it daily, I only finished it for my book deadline, in 2007. I did at least 30 drafts, but that is usual for me. I am slow, and, furthermore, I don’t write unless I need to. And I have a small child. And a job. Things take time.

I do believe that a particular sensibility organizes, culls, winnows the world in a unique way. Is that inspiration?

I also know that there are some writers who, whenever I read their work, I want to write: Szymborska, (Zbigniew and George) Herbert, Frost, Bishop, Ross Taylor, Stevens, etc. Is that inspiration?

I don’t think I have been “given” many poems. Poems are hard work in my world, and if they aren’t, I don’t trust them. Because I love revising, most of the work of writing for me happens there. Actually, I hate composing poems, so I constantly troll notes and old drafts for scraps that I can recycle, therefore, parts of this poem are probably even older.

For me, the trick of this poem was finding the proper compression to give it the energy it needed once I started burying the anger. It’s an angry poem, for all the speaker’s desire to become a cat, not a tiger. The anger was much more overt in early drafts in a way that was too screechy for a poem about regret. The speaker needs to be somewhat surprised at the end by her own statement “sorry I don’t like you.” But once I had toned down the anger, the poem felt flat. Compression and a certain quickness is what I then worked for, to keep it lively, I hope.

Less than one year later, in the book…

I am not one of those ardent seekers. I don’t send work out often—since I find a lot of that business stuff a little soulless and bad for my writing. I had a wise teacher, Jacqueline Osherow, once tell me “You can write a poem that someone will publish—send this one off now. BUT, what would happen if you wrote and wrote that poem until you knew it was done?” So my poems have a long time to grow in darkness, that interior space where they stay until they are ready to come out. Usually a couple of years.

At one point in my writing life, I had a strong desire to write about intellectual events or events surrounding art, since a lot of my life is organized around thinking about and experiencing art. Needing to revive the autobiographical lyric, I decided I should figure out a way to get what I read in books, saw in galleries or in movies into my poems. It is true that books, movies, art have changed my life. The quest was to figure out how to make those private events seem exciting or dramatic.

What poem isn’t? A poem, even a lyric poem, crystallizes around a narrative. When the reader finds it, the poem sparkles that much more.

Oh, yes, absolutely. Maybe it’s my Catholic background, but I believe we poets are not here to know ourselves better, or to gain self-knowledge, etc. The poet’s personal journey, the eye turned inward, isn’t as important to me, unless it is about the difficulties of being a moral person, one who then turns the eye outward. I believe poetry amounts to a pile of beans when the writer isn’t figuring out how to do what’s right. The freedom that Isabelle Archer is given and mispends, well, we all squander daily.

Anne Carson gave me permission to be a bit more explanatory, less pretty with my lines, my friend Sheila Black encouraged me to think in a dramatic way, and Louise Glück who always reminds me to be pitiless, especially about myself.

Absolutely, my ideal reader is the writer who pushed me to write. Whoever made me put down this poem, through their own poem/s is who I imagine listening when I write. There are a couple of mentors who inhabit that reader space: Jacqueline Osherow and James McMichael will always be in that conversation I have inside my head as I write.

I am pretty private, though I do show poems to my learned poet friend, Sheila Black, who also lives here in Las Cruces.

It’s not that different, part of series of poems I have been writing where another text (poem, movie, play) provides the metaphoric or philosophical impetus. It’s a precursor to the book I am working on now, where the autobiographical aspect is nearly gone—where the ideas, images, metaphors take the stage and the speaker’s identity is what I call the “Citizen I.”

Isabel Archer is American and hopeful and foolish for it. That is what the speaker sees in herself—naïve choices based on a silly American optimism. The French in me should know better.

I usually finish poems. No one sees the abandoned ones…
Posted by Brian Brodeur at 11:50 AM