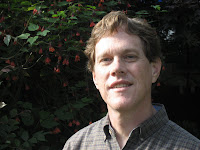 Bruce Bond’s collections of poetry include Peal (Etruscan Press, 2009), Blind Rain (Finalist, TIL Best Book of Poetry Prize, LSU, 2008), Cinder (Finalist, TIL Best Book of Poetry Prize, Etruscan Press, 2003), The Throats of Narcissus (University of Arkansas, 2001), Radiography (TIL Best Book of Poetry Award, BOA Editions, 1997), The Anteroom of Paradise (Colladay Award, QRL, 1991), and Independence Days (R. Gross Award, Woodley Press, 1990). His poetry has appeared in Best American Poetry, The Yale Review, The Georgia Review, Raritan, The New Republic, The Virginia Quarterly, Poetry, and many other journals, and he has received numerous honors including fellowships from the NEA, Texas Commission on the Arts, and other organizations. Presently he is Regents Professor of English at the University of North Texas and Poetry Editor for American Literary Review.

One day now since my father last tried to speak,
since the outer provinces of his body shut
down like small cities when the power goes,
just the enormity of starlight to guide them
on their cold journey into dawn. I am writing
at the edge of the other half of life, the part
without my father in it; I feel the strange

sure pull of the earth I walk here,
the polish of the grass, the distance between me
and my students who look up and wait
for my first questions, knowing so little
of my life, just as I know so little of theirs,
only a poem at a time to hold us together
like children before a fire in the woods.

These months I have heard him steadily
fading in my telephone, his breath gone
short, just the occasional brush of wind
and language, here and there an angry stutter
and release, the little sighs that resign themselves
to his own deep and smoldering basin,
his own coastal reaches tossing in their tides.

The living too leave their ghosts behind.
And his, clearly, always the first to rise.
Somewhere a fork beats a metal bowl;
a strip of bacon crackles like paper at Christmas.
These days moving from room to room
I feel the shadow of this house begin
to lengthen, to feed the other pools of dark.

It’s a mystery still, how vast the valley
inside a body. Blood. It’s what you hear
when you cover your ears, that far surf
where life first sprouted its legs and crawled
ashore to dry its tail in the morning sun.
It’s what sparks beneath a nurse’s mercy,
a red gem brightening in a sting of air.

It’s what calls you to a father’s ragged breathing.
Somewhere a lung fills with water.
Somewhere a great and weary muscle
beats the tender drum of the sky.
It’s the father who knocks on the door
at daybreak, the knock that says, it’s time
son, rise and shine, it’s time to go, it’s time.

It was composed in February of 2003, the night my father died. I was in Texas at the time while my father was in California. I worked all night on it, and in the morning when it was pretty much finished I got the phone call from my brother telling me the news. Then I fell asleep.

Not many revisions. Some tightening here and there. There was another stanza which Terry Hummer at the Georgia Review encouraged me to cut. I think that helped the poem considerably.

Sure, I believe in inspiration, though I’m also a big believer that the imagination need not vanish once our critical intelligence becomes engaged. It’s possible to imagine critically, though it remains a mystery how this happens. In any case I remain open to the notion that there is an integrity to our unconscious, a wisdom that is often a couple steps ahead of the critical mind. With this poem, I wrote under the force of an immense weight. I know the results are not often good when this happens. Often we need distance. But I also think that emotional turmoil sometimes overtakes the mind in strange and meaningful ways. Sometimes hard times give us a waking life of dreams. The underworld appears. I don’t really care much if some people think that this process of writing about hardship exploits suffering selfishly in the cause of art. Art redeems us, redeems the moment, in part because it transfigures suffering, and of course there is something self-preserving in that. We give it form and so bear loving testament even as we declare ourselves, in some humanizing measure, free.

I did use the sense of breathing in the line and stanza, a somewhat elusive musical intuition, to propel me, but other than that I was pretty swept up in discovering what the moment had to teach me. This said, technique is something I am constantly working on, I suppose, even when I am not consciously thinking of it as technique—that is, part of my enthusiasm and reverence is, and must be, for the word and its capacity to surprise meaningfully and musically. A poet’s technique properly understood is no different from that of a musician’s or a carpenter’s. It makes of our heightened intimacy with our medium a means to channel vital energies which in turn reinvent that medium. We bring mind to matter. All the poetry we have written in the past, all the close reading we do, hopefully prepares us for the moment of emotional urgency when it comes, so we do not relax into the authority of the situation we are in, so that we seize the opportunity to remake the world as both an imaginative and an authenticated construct.

Not too long. I think I sent it out fairly soon after I wrote it, and soon after it got accepted at Georgia Review.

I am horrible at being patient, though I’ve gotten a bit better lately. I don’t advise anyone to be as impetuous as I am when it comes to sending out work. The result is that I’ve sent a lot of bad, unfinished poetry across the desks of editors. Luckily for everyone involved most of it gets rejected, though I feel bad for wasting the time of editors. I am fortunate that by the time my books are finished, poems have been around for a long time, a year or more, so I am more likely to see them clearly.

This poem is clearly rooted in factual experience, though I hope it offers some emotional and imaginative resistance to the literal. That tends to be what I aim for.

Yes and no. I often feel trapped in a poem that is too flatly narrative. I crave openings, speculations, lyrical intensity, gestures that complicate a tidy and obvious chronology. At the same time, narrative constitutes a powerful way of authenticating a poem, provided the language and consciousness of the writer remain animating forces of inwardness and surprise.

No, I don’t remember. Alas.

No, not really. I feel lucky to have any readers at all, though I’m not immune to the human greed for more. My ideal reader is not any one kind of reader, necessarily, though I think the poem has a better chance of succeeding if I write for someone like myself only smarter. I say “someone like myself” since I’m not sure I can do otherwise without cutting myself off from whatever imaginative resources and instincts might deepen the poem at the level of feeling and idea.

Basically I show my work to my wife. She responds very honestly and is immeasurably helpful.

I’m not sure. It is written is one of my more lucid modes, I guess.

I’m not sure about this either. I don’t identify very strongly with being American, though I unmistakably am in ways that are invisible to me. I don’t doubt that.

Abandoned, as with all my poems.

Posted by Brian Brodeur at 2:11 PM