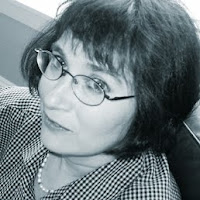 Lucia Perillo has published five books of poetry including Dangerous Life (Northeastern University Press, 1989); The Body Mutinies (Purdue University Press, 1996), which was awarded the Revson Prize from PEN, the Kate tufts prize from Claremont University, and the Balcones Prize; and The Oldest Map with the Name America (Random House, 1999). Luck is Luck (Random House, 2005) won the Kingsley Tufts Prize. Her new book, Inseminating the Elephant, was published by Copper Canyon in 2009. In 2000, Perillo was awarded a MacArthur Foundation fellowship. She lives in Olympia, Washington with her husband and dog. To learn more about Lucia Perillo, please visit her website.

Achilles slays the man who slayed his friend, pierces the corpse
behind the heels and drags it
behind his chariot like the cans that trail
a bride and groom. Then he lays out
a banquet for his men, oxen and goats
and pigs and sheep; the soldiers eat
until a greasy moonbeam lights their beards.

The first slaughter is for victory, but the second slaughter is for grief—
in the morning more animals must be killed
for burning with the body of the friend. But Achilles finds
no consolation in the hiss and crackle of their fat;
not even heaving four stallions on the pyre
can lift the ballast of his sorrow.

And here I turn my back on the epic hero—the one who slits
the throats of his friend’s dogs,
killing what the loved one loved
to reverse the polarity of grief. Let him repent
by vanishing from my concern
after he throws the dogs onto the fire.
The singed fur makes the air too difficult to breathe.

When the oil wells of Persia burned I did not weep
until I heard about the birds, the long-legged ones especially
which I imagined to be scarlet, with crests like egrets
and tails like peacocks, covered in tar
weighting the feathers they dragged through black shallows
at the rim of the marsh. But once

I told this to a man who said I was inhuman, for giving animals
my first lament. So now I guard
my inhumanity like the jackal
who appears behind the army base at dusk,
come there for scraps with his head lowered
in a posture that looks like appeasement,
though it is not.

Firstly, I’d like to caution people against a straight-on explanation of a poem by its writer, which seems like a recipe for misinformation. But in this case I do have a specific memory of writing the fourth stanza in 1991, during the first gulf war.

My ability to write by hand deteriorated during the long assemblage of this poem. Since I write mostly with a computer now, I can’t say how many revisions the poem underwent. I finished the poem in 2008, when I decided to write a poem about the Iliad. I finally had a place to put the old fragment.

I compose using lyric methods—words pop into my head and I begin reciting/semi-singing them. And I also use intellectual/analytic methods. You could say one method is received and one is work. But I don’t like to analyze the process too much—probably for fear of damaging it.

The sense of final form seems to me like received knowledge that the poet finally surrenders to.

It was a quick one, for me, if you discount the seventeen-year gap. Maybe a year?

The problem of the poem was how to allude to a complex text, and how to add something to the recapitulation of an often-recapitulated work. I wanted the allusion to be clear to those who haven’t read the Iliad. My poem moves from that poem to a snip of a personal anecdote, which incorporates both fact and fiction.

It has various narratives in operation: Homer’s, mine, and the historical narratives of our two most recent wars.

Do you remember who you were reading when you wrote this poem?

Homer, of course, but I will also say the jackal is real and comes from a book called Birding Babylon, which is a transcription of a soldier’s field notes/blog, from his time in Iraq.

I guess that would be me.

Unfortunately, I have no one to share poems with regularly. But the flip side of that is that a unicorn was not designed by a committee.

That’s a question for critics, I think. It’s best not to get outside one’s poems.

It happens to be very American because it draws on our recent history. To get outside myself (and violate the rule I just set forth), I suppose it’s unusual for me.

The poet Valéry said that we never finish, only abandon.
Posted by Brian Brodeur at 11:12 AM