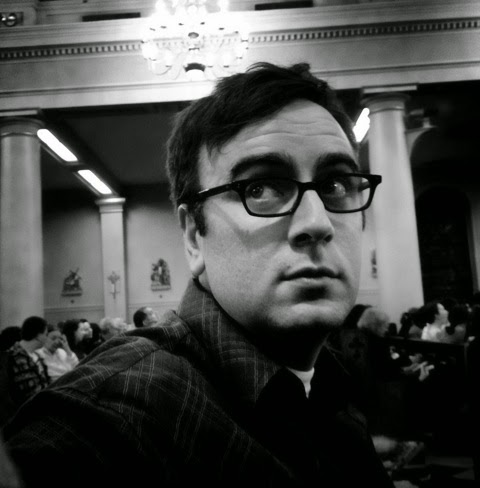 Robert Krut is the author of This is the Ocean (Bona Fide Books, 2013), which received the Melissa Lanitis Gregory Poetry Award, as well as The Spider Sermons (BlazeVox, 2009). His work has appeared widely in print and online, in journals like Cimarron Review, Blackbird, Smartish Pace, and more. In 2007, H_NGM_N released his chapbook Theory of the Walking Big Bang; subsequently, he began serving on the press/journal’s Editorial Board. He teaches at the University of California, Santa Barbara, and lives in Los Angeles.

A mermaid circled by a ring of jellyfish,
light dotting the water, a prism shattered
on the waves. I can nearly reach her.

Ovals of smudged soot for eyes—
around her neck, my heart on a string,
a leather pocket in suspended breath.

Opening her mouth, a whirlpool revealed,
a vacuumed riptide—
water pulls away in all directions.

I reach out to her, but cannot see.

Waking in the middle of the desert, slate rock
beneath my knees as I look up, blinded by sun,
seaweed draped across my shoulders.

There may be nothing for miles and miles,
but I have come from the bottom of the ocean,
and I am here to tell you about it.

A few years ago, maybe five or six. I have two general ways a poem starts, ways that I suspect are similar to most writers. Sometimes it comes from noticing something specific: a person in a diner, an old store-sign, a stray cat in the yard. Other times, it is more of a gradual reveal of something hovering around inside my head. I'll have particular images that float around in my consciousness that I can't shake. For a few weeks before this particular poem, I kept drifting toward two images: a leather-skinned heart, hanging from a string, and a vial of ink in its place, inside a chest. I didn't know for sure that I wanted to work these images into poems, but at night, going to sleep, that's what I would see, and during the day, if I closed my eyes for more than a blink, that's what I saw: an image cloud working its way across my brain for a few weeks. Sometimes I try to harness images like that, sitting down at the computer to wrestle them onto the page, and other times, in a rush, they're released all at once. With this one, it was the latter—I sat down without a specific goal, and they were suddenly there (and wound up elsewhere, later, in other poems, as well).

It went through a lot of trimming, just trying to cut the language as close to the bone as felt possible.  I felt an urgency with this one, so it wasn't long between first and final drafts—I obsessed over it for about three weeks until it was in fighting shape.

The initial spark, and the "content" (however you define that) was definitely "received," but the crafting of that text into a poem was heavy-lifting of obsessive cuts, additions, and more cuts. I do believe in inspiration, but think it comes in two ways. There's that rare, wonderful sort of vision-based experience, where an image is revealed and won't disappear. That doesn't happen often, but when it does, it feels great. But there's also inspiration in simpler, more earth-bound sort of ways, like noticing someone's mannerisms, or an out of place bit of graffiti, or something along those lines, where daily life presents you with inspiration for a poem.

The form came somewhat organically for this one—Everything happened somewhat naturally. For example, the two single-line stanzas were there in the initial writing, not something I was consciously doing. Ultimately, I did edit it to get all of the others to three lines apiece—since it is what some might call surreal, I wanted the stanzas following a strict length. I felt like, in a poem like this, a more free-form framework might make the whole thing disappear.

I was heading up to work—I live in Los Angeles, but work in Santa Barbara—which is a drive alongside the Pacific Ocean. It was a day where I had a little extra time, so I pulled over to hang out at the beach for a bit. I wasn’t planning on writing, necessarily, but I had my notebook with me. I sat down at a picnic table looking at the cliffs and the water and wrote the whole piece right there—I saw the whole narrative of the piece and starting writing. Frequently, I jot down phrases or images when I’m in places like that, but it is rare that I write an entire draft. It was like those images mentioned earlier needed to be written in that particular place, in one rush.

Years—the first time it appeared was in the book. Prior to that, the closest it came to being published was in the form of a video-poem, in conjunction with the book’s release.

No rules, really, although I do try to wait at least a bit, as I know there is usually that endgame after you think you're done, sometimes weeks or months later, when you realize/admit it needs more work.

The quick response is that it takes what is fiction and tries to present it as straightforwardly as possible, to make it fact. The longer response is that—and I know how this will sound, but still—it is all fact to me here. Of course, the fact is that it didn't happen in the tangible world—but to me, it was all very real.

I had recently purchased Bed of Sphinxes by the great San Francisco Surrealist Philip Lamantia—at City Lights Bookstore, no less. Somehow I hadn't really read him before. I felt an immediate connection with him and his work. I know those poems were floating around in my head while I wrote this, and for a long time after.

I always hope someone out there will connect with something I write. I know that may be a slim margin of a sliver of a stream of the reading world, but I hope someone reads it and connects. So, I don’t really have an “ideal reader” in mind so much as someone just open to reading a poem.

This was in a small group of poems that I could tell were the start of my second book. (My first, I felt, was done, even though it was a few months away from being accepted). It felt different. I sent the group of about eight poems to my friend Pete Miller, who, in addition to being one of my favorite poets, is a great reader. He offered up wonderful advice on what to keep and what to cut in the poem. As a bonus, he introduced me to a group of poets—all in different cities—who share a new poem each week in ten-week, seasonal bursts, offering suggestions to each other. That group, which has a bit of a revolving door (although certain people like Pete, Trish Murphy, Sarah Pape are there every round) made a huge impact on my writing for the second book.

Before this one, “the ocean” as an image was sort of off limits—It felt a bit too loaded, too played-out, too overused. With this one, though, once it got moving, I realized I wanted to throw out the rules of what I could and couldn’t write about, or use in a poem. I knew it was a big, perhaps overripe image/concept, but I decided that I was going to embrace it fully, and hopefully make it unique.
What I hope is happening in this poem, and the book (where, clearly, the ocean plays a major role) is that combining that sort of potentially tricky image with the minutely personal surreal, something new happens.

The poem was written in and (for me) takes place on the California coast. I hope, though, that it is sort of borderless.

While there is a big part of me likes the idea that no poem is ever finished, this one feels that way to me. That last line is almost a built-in stopping point, telling me it's time to go write new ones.