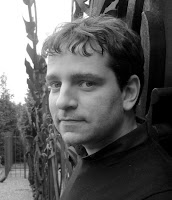 Michael Dumanis is the author of My Soviet Union (University of Massachusetts Press, 2007), winner of the Juniper Prize for Poetry, as well as the co-editor of Legitimate Dangers: American Poets of the New Century (Sarabande Books, 2006). He is Assistant Professor of English at Cleveland State University, and serves as the director of the Cleveland State University Poetry Center.

Do not endeavor
to snapshot the locals.

Do not trust anything
that could snap shut.

Do not confuse
yourself with your reflection,

this span of ruins with a system,
this inn with a place to come back to.

Rein in the impulse to build
a new city from these scattered twigs.

Do not poke around in the abandoned
houses of the damaged village.

Do not get curious
about shiny metal in the grass.

Do not plant kisses
on the blind accordionist.

Leave the mermaid alone,
it is not meant to be.

You will cause offense.
You will not hear the knob turn.

You will wake to find stones in your mouth
and a lake in each eye.

Do not ring the concierge.
Do not search for the consulate.

Regard every centimeter
of ground as suspicious.

Do not meander too far
from a given road's shoulder.

Owning a car does not give
you the clearance to drive.

In one sitting, in Cincinnati, Ohio, in the Fall of 2000, with a recent Lonely Planet Tourbook to Bosnia Herzegovina in my lap, and Leonard Cohen singing “Everybody Knows” in the background. The year before, I had been a Fulbright Fellow in Bulgaria, and had wanted to travel by train to the countries of the former Yugoslavia, including Bosnia. This is just a few years after the Bosnian War, not long after the American airtstrikes on Serbia, and in the midst of the refugee crisis in Kosovo. I did not go to Bosnia, but I did buy a tour book published at the end of the war. I remember opening straight to the “Travel Advisory” section. There were many things you were not supposed to do as a tourist in wartime. In assembling the poem, I imported a few of those travel advisories from the Lonely Planet, then added a few of my own.

I have a somewhat unorthodox approach to revision. I chisel one line (or in this poem’s case, one couplet) at a time, until it feels right, and don’t go on to the next line (or couplet) until it does. Every line is then sonically and rhythmically/metrically triggered by the lines preceding it. So I am basically revising as I am writing the first draft, and the poem structurally doesn’t invite much revision after the first draft has been completed. I may change a word here or there, but my first drafts are ultimately quite similar to my final ones. The first draft of “Travel Advisory” had only two differences from the last. The phrase “abandoned houses of the damaged village” had originally been “damaged houses of the abandoned village,” a direct lift from the Lonely Planet. Also, the phrase, “Each day you are bound to lose something” may have originally appeared only once. I think I chose to repeat the phrase a week later.

Well ten percent of this poem was received, that is, triggered by, my encounter with the Lonely Planet tourbook. Some rhythmic osmosis may have transpired from the conscious decision to play Leonard Cohen in the background while writing it. The rest of it is sweat-and-tears, though in my case, the sweat-and-tears occasional tend to resemble more a manic, caffeinated frenzy, some pacing, and a lot of talking to oneself in a loud whisper.

I wrote the first two couplets first. They set the rhythm for the other couplets. I was, at the time, heavily experimenting with creating tension through how I chose to enjamb the first lines of closed couplets. The poem immediately seemed to want to enter a couplet form. As elsewhere in my work, words I used would trigger other words, so that “snapshot” in line two would morph into “snap shut” in line four and then into “slipshod” in line six, et cetera.

It originally appeared in the now-defunct journal Chelsea in Fall 2002, two years after I wrote it.

In writing my first book, I would send my poems off as soon as they felt individually finished. In assembling a second manuscript, I have been less eager to send off the poems too fast, and have been happy to let them accumulate for a while first, so I can see how they engage in dialogue with one another instead of getting distracted by some kind of madcap rush to get them out into the world.

I don’t know the difference between fact and fiction. I believe in emotional honesty. I meant everything I said after I said it. I am not trying to tell anyone some kind of story. I am trying to induce an emotional state in somebody else. How does a painting or a symphony negotiate between fact and fiction? The mermaid is as factual as the word “slipshod” or as the uselessness of some trains.

No. I don’t know what narrative poems are, either. Or yes. It has, after all, like narrative, a beginning, a middle, and an end.

Besides travel guides, I was probably reading a lot of Wallace Stevens, John Berryman, Michael Palmer, James Tate, Heather McHugh, Carolyn Forche, Lucie Brock-Broido, Donald Justice, and Mark Strand. I had also, around that time, fallen in love with two first books by then-emerging poets, and was spending lots of time with them—Some Ether by Nick Flynn, and And Her Soul Out of Nothing by Olena Kalytiak Davis.

Yes. I met them over time in Houston and Iowa City and New York. I call them on the phone and bother them.

I rarely use text from other sources in my writing, so in that way, this poem is a bit of an exception.

You know, I never know what that means, and then I feel stupid because I feel like I am supposed to know what that means, but I don’t. I was once asked to write a piece called “What Is American About American Poetry” for a poetry website, and I couldn’t do it. I tried, but I failed. I feel like the question is complicated for me, as a bilingual poet born abroad, in the former Soviet Union, who feels like what is being asked is, “What is American about you, Michael Dumanis? And answer quick, before we deport you to a poetry gulag.” I also know that that is not what is being asked, that it’s really a way for American writers (of which I am one) to assert and define and celebrate their American-ness, but I also feel the question is somehow exclusionary, as though a poem written by an American could somehow be an unAmerican poem.