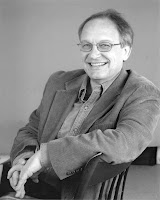 James Richardson's most recent books are By the Numbers: Poems and Aphorisms, which was a finalist for the 2010 National Book Award, Interglacial: New and Selected Poems and Aphorisms, a finalist for the 2004 National Book Critics Circle Award, and Vectors: Aphorisms and Ten-Second Essays (2001). His work appears in The New Yorker, Slate, Paris Review, Yale Review, Great American Prose Poems, Geary's Guide to the World's Great Aphorists, The Pushcart Prize and five recent volumes of The Best American Poetry. He is Professor of English and Creative Writing at Princeton University.

In Shakespeare a lover turns into an ass
as you would expect. Others confuse
their consciences with ghosts and witches.
Old men throw everything away
when they panic and can’t feel their lives.
They pinch themselves, pierce themselves with twigs,
cliffs, lightning, to die—yes, finally—in glad pain.

You marry a woman you’ve never talked to,
a woman you thought was a boy.
Sixteen years go by as a curtain billows
once, twice. Your children are lost,
they come back, you don’t remember how.
A love turns to a statue in a dress, the statue
comes back to life. O god, it’s all so realistic
I can’t stand it. Whereat I weep and sing.

Such a relief to burst from the theater
into our cool, imaginary streets
where we know who’s who and what’s what,
and command with Metrocards our destinations.

Where no one with a story struggling in him
convulses as it eats its way out,
and no one in an antiseptic corridor
or in deserts or in downtown darkling plains
staggers through an Act that just will not end,
eyes burning with the burning of the dead.

Maybe it really started in 1970, when I started reading Shakespeare seriously and saw my first Royal Shakespeare Company production – Judi Dench as Perdita in The Winter’s Tale, which figures prominently in the second stanza. Certainly by then I was already getting the poem’s main idea, that the most fantastic moments in literature are often realer than mere realism. But more practically, I see that the poem’s first line and the seed of the Lear part (“old men throw everything away”) appear in a 2003 notebook.

I probably chanced upon that brief 2003 note a million times, occasionally adding further thoughts, before I first really worked on the poem seriously during 2006. It was published in The New Yorker in 2007 but I tinkered with it through 2010 when it was included in my book By the Numbers.

If “inspiration” just means “something out of our conscious control,” then everything we say is inspired – we speak easily, but the process of assembling even the simplest sentence goes on out of sight. We have no idea how we do it. Which in a way collapses the difference between lines “given” and lines that are “willed” or “worked.” I.e., even when you write a line during a period of hard, hard work—where did it come from?

But with poems, there are times hard work will help, and times it won’t at all, or when it will hurt. Even if I know in advance where a poem is going to go (and actually I’d rather not know) I can’t just make it happen through will and work. There are moods and times when it will “come” and you have to wait for them (though there are ways to encourage them). If you force the poem, you wreck it. Actually, I don’t like the feeling of hammering at a poem. I like to let the lapse of time do most of the writing, to get it to the point where working on it is a pleasure rather than a boredom and an agony.

All this seems to me part of the normal mystery of the mind – I don’t imagine it as having anything to do with a Muse or any other kind of divinity.

As above, I’d quibble with the everyday distinction between “consciously” and “unconsciously.” But “technique” in the sense that dancing or graceful movement or good singing come out of technique? Certainly. And the things I fuss with longest and think it’s most important to get right might be called “technical,” essentially matters of movement—rhythm and the hesitations and runs, hangs and falls of syntax.

Usually at least a few months, often much longer. And of course the poem has often, as with this one, been around in one form or another for years.

It doesn’t seem to me there’s anything factual in the poem, except the facts of the plays (and I might have even made up one or two of them). Though maybe the whole poem is about the relation between fact and fiction, our real lives and the imaginary worlds we read about. I.e. Shakespeare’s “statue in a dress” scene is about the way relationships alternately cool and warm, the appearance and disappearance of children is something all parents know about, and we often “wake up” and think something like “What have I been doing for the last sixteen years???” Of course I have felt these things in my life, but there’s nothing specifically autobiographical in the poem, nothing that couldn’t have happened to almost anyone.

Don’t think so. I disapprove of narrative in my poems, thinking it a great temptation to slackness and self-indulgence. Though other poets are allowed to use it! But I often write poems, like this one, that are about other narratives.

I usually read dozens of poets at a time, so that’s hard to say. Of course it’s about Shakespeare, but I wasn’t reading him at the time, except maybe sonnets (which I teach) and of course it doesn’t sound anything like him.

In a way I must, since I have a real horror of talking too much, of being pedantic or insisting on the obvious, and just generally of boring people. But the person who’s judging that is Me the Reader, who is pretty much simultaneous with (or just a little later than) Me the Writer. I think if you think too much about audience you get too inhibited in some ways (Saying the Correct Thing) and too uninhibited in others (Preachy and Rhetorical).

Only my wife, who is a great reader, a Poetry Person and a Professor of English.

I think I write too many kinds of poems to know what my Standard Poem is, and therefore to say how this one varies from the standard. A lot of my other work is either more purely lyrical (less discursive) or purely aphoristic.

I don’t think of myself as anything but American. I’m not worldly or cosmopolitan—e.g., I wouldn’t even know how to want to be European, or anything else, much less be it. So the poem must be American. Is it “typically American,” whatever that is? I don’t know, but I suspect I wouldn’t want it to be.

Abandoned. I mean, I like it pretty much, but there are still things about it I’m not satisfied with. They seem little, individually, but after a while you realize that to fix them you’d have to change everything and you just can’t. Or rather, you can do that only by going on to the next poem.
Posted by Brian Brodeur at 11:28 AM