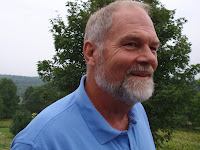 Sydney Lea's ninth and tenth collections, Young of the Year and I Was Thinking of Beauty, will appear from Four Way Books, respectively, in April of 2011 and in 2013. Lea was founder and for thirteen years editor of New England Review. Recipient of fellowships from the Guggenheim, Rockefeller and Fulbright Foundations, Lea was a poetry finalist for the 2001 Pulitzer Prize. He has published a novel, A Place in Mind, and two collections of naturalist nonfiction. In 2011 he'll retire after forty-two years of teaching at various American institutions: Yale, Wesleyan, Middlebury and Dartmouth Colleges, and for thirteen years, the Vermont College MFA program. Lea is active in conservation efforts in Maine and Vermont, and is a longtime board member of Central Vermont Adult Basic Education.

I remember that store, and the nasty redneck whose stink
seemed a challenge to everyone in it. The scene
is decades old, but I’m still confused that no one
took up the challenge—including me, though I liked
an occasional fight back then. The prospect of pain

meant less to me once, I guess. An aneurism
had just killed my brother, so the pain I’m talking about
was my body’s. I breathed up another pain that day.
I checked the man’s beat pickup; why would he want them,
those skunks knee-deep in its bed? I left the lot

still more confused, my sweet retriever shivering
on the seat beside me. The godawful smell still clung
to the dog’s wet coat, and my own. There’d be no more hikes
for us that morning: rain had arrived, bone-chilling.
If you killed a skunk, why would you keep the thing?

To kill some time, I stopped at The Jackpot View.
We’ve always called it that. Five mountaintops bled
into mists to my east in New Hampshire. The sudden squalls
spilled leaves on the woods-floor’s pall of nondescript hue.
Now he was dead. Now my brother was dead.

I can’t define any God, but only this morning,
I caught a whiff of road-killed skunk and thought
I could speak of Him or Her or It as surely
as I could tell you the slightest thing concerning
the man I’m remembering now, the one who shot

or trapped or clubbed those miserable reeking creatures.
The smallest enigmas we ever encounter remain
as hard to explain as all the epical ones.
I’ve failed for years to fathom the death of my brother;
but it’s just as hard to understand why a scene

in an old Vermont store should linger like dead-skunk odor,
which if you’ve lately been tainted comes back to scent you
whenever a rain blows in—or like some pains
you may have thought you’d forever gotten over,
but which at some odd prompting come back to haunt you.

I look back into my 'Draft Copies' folder, and see that I began the poem in May of '09 and got it to the version above in March of 2010. It began in the way I suggest in stanza five: "only this morning, I caught a whiff of road-killed skunk." I was just driving down to the village when I passed the roadkill, and the odor—isn't smell the most suggestive of the senses, the least willed?—I thought, as I had for many years off and on, about the guy who, strangely as strangely can be, had all those dead skunks in his truck; to recall that episode was to recall that it followed hard on the death of my younger brother. The poem at large ensued from that association.

That same folder shows twenty-four stabs at getting it right. Above is number twenty-five. To be sure, some of the changes from late draft to later were pretty minor, a word here, a phrase there, etc. But that much revision is not uncommon for me.

What we call “inspiration” is for me really the operation of selective memory. Certain experiences suddenly come back to me, one often having nothing, apparently, to do with the other. The poem is “about” what in fact they do have to do with each other, which has to be something after all, merely because I'm the one to have recalled them.

I have no interest in the formalist/free verse debate, because the fiercer it gets, the stupider. The formalists accuse the free-versers of sloppy thinking and craft, as if such a slur applied to Dr. Williams, say; the free-verse zealots accuse the formalists of being ‘establishment’ figures as if vers libre were somehow something new, and hadn't been the establishment mode for eighty years or so now, and as if the greatest of American formalists, the Delta blues musicians, were somehow so many little Newt Gingriches.

That said, I am a formalist, period, even when it may be unobvious, when, for instance, I use eccentric meters or nonce forms. It seems obvious enough here: five-line stanzas, five-stress lines, and rhymes or slant rhymes in lines two and five. I wrote, as always, a very quick draft of what came at me. Then I noticed X number of lines (more than are here now) and fooled around with finding a common divisor that would break the draft into stanzas of equal length. (I should interject that two of the meters, tetrameter or pentameter, come at me much more effortlessly than any free-verse mode, a fact that even I don’t quite understand.) Then I noticed that lines two and five rhymed, or sort of, in one of the stanzas, and I fiddled around with making that true of them all. And so on. Mere doodling.....

Which may sound mechanical as hell, and could well be for someone else. For me, this sort of monkeying around is a way of engaging in play, and abandoning myself to what are, a bit fuzzily, sometimes called the “musical” properties of language, but above all of getting over any too strenuous effort to mean something. For me anyhow, this non-method allows the language and the formalities to lead me by the nose, as it were; I just tag along wherever they take me—sometimes to a poem, sometimes to a mess, but I usually like the ride in any case.

Without looking the matter up, I’d guess eighteen months.

That varies with every poem. Usually I revise sporadically for a long, long time, leaving the poem in Desk Drawer Land for considerable spell between revisions. But all of us know that there is, now and then, the poem that seems a freebie, that arrives, it seems, at no cost to our energies. This is the Muse’s way of rewarding us for all the hours we put into the non-freebies.

Everything in it is fact, or at least that’s true—to use circular logic—of the factual parts. If I say in a poem that I lost a brother, for instance, that had better be verifiable. I don’t know that this is a moral stance, though I do have some contempt for people who fake experience by way of making themselves look admirable or (pleeeeease) sensitive, so much as it is a stance that enables me. I am, I guess, a capital-R Realist Poet, to use a reductive label.

It does tell a story, so maybe yes. But that’s not the whole enchilada; I think of myself as a poet who, no matter what he addresses, does have an interest if not necessarily in plot, then in other narrative values: character, setting, what have you.

I can’t recall what I may have been reading. My principal influences are 19th-century ones, especially Wordsworth and Keats. My principal American influence is Frost, though—not at all patently—Dickinson must be in there somehow too. More recent influences are, again, quite different poets: Robert Penn Warren and Donald Justice.

Yes, the reader whom I envision is sometimes one neighbor, sometimes a composite of several. These are people—crusty, feisty, laconic and sometimes even xenophobic Vermont hill farm stock, or what’s left of it—who are dear friends, but who will never read a word of mine, unless maybe something in prose. Again, to picture these neighbors as I start to write is a trick that enables me; it makes no sense on earth.

My wife knows me better than anyone, so she’s my best critic. She can tell me when I am faking it, maybe even trying to make myself look “sensitive” in that phony way. I tease her that she’s a recovering lawyer; in fact, she’s a professional mediator. She is brilliant and literate, but—and this is important to me—she is not literary. One of my favorite poets and friends, Fleda Brown, also sees almost all I do; and so does Stephen Arkin, who’s not a poet (he taught literature for four decades at San Francisco State and was my closest grad school pal) but is exquisitely attuned to language and is another keep-him-honest reader, knowing me as thoroughly as he does.

I'm not the one to judge that.

It is set in America, for starters. And, despite its formalism, it seeks to sound like actual speech, which is a very American concern. My dear friend Marjan Strojan, a Slovenian poet, informs me, for example, that that’s not a consideration at all among his compatriots.

Auden was right about that. I got it as good as it was going to get, given such gifts as I own. Then I moved elsewhere.
Posted by Brian Brodeur at 12:33 PM