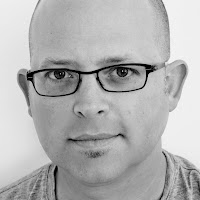 Joel Brouwer was born in Grand Rapids, Michigan, in 1968. He is the author of Exactly What Happened (Purdue University Press, 1999), Centuries (Four Way Books, 2003), and And So (Four Way Books, 2009). He has held fellowships from the National Endowment for the Arts, the Wisconsin Institute for Creative Writing, and the John Simon Guggenheim Memorial Foundation. He lives in Tuscaloosa, Alabama, and teaches at The University of Alabama.

After a morning of work in separate rooms
she said she was going to the municipal pool
and he said he would walk along the river
for a while before they met back for their lunch
of tomatoes and cheese. But in fact she went
to the lobby of the Hôtel du Panthéon
to read the Herald Tribune and drink a cup
of the Irish tea she liked and he to
the little church of St. Médard. A couple
old women in housedresses knelt in the first pews.
He sat in the back, with the drunks or alone.
And at lunch she said terrible, the lanes
were filled with kids from the elementary school
or terrific, I had it to myself. And he said
a barge full of oyster shells. Then quiet sex
with the curtains drawn against the chemistry
students conducting their experiments in the building
across the street. Incremental triumphs
of exactitude and necessity. In the evenings
they liked to fire champagne corks at the vast
darkened laboratory windows. Imagining the mice
startling in their cages, imagining catastrophe.
Turning back to their tumors with relief.

Like most of my poems, this one began with me combing through notebooks, pulling out a couple handfuls of lines, images, and phrases that seemed to me not completely boring, then arranging them on the page and filling in extra language to connect them to each other.

I can’t say how many revisions there were. I work on a computer, not a typewriter, so there isn’t a neat archive of versions of the poem. The poem endured countless tiny cuts and augmentations, and a few major surgeries. The oldest phrases in the poem predate its publication by around twelve years.

If by inspiration you mean receiving energy from angels or anything along those lines, then no, I do not believe in that. I do think (as opposed to “believe”) that intuition plays a major part in composition. In the early stages of writing this poem, I had the couple telling white lies to each other, and I had laboratory mice in their cages at night, recovering from the day’s depredations and dreading the morning. Putting these two ideas together was the result of intuition. Connecting them took some labor.

The poem is about a strained relationship and it uses tumorous mice as its metaphor. These are dangerous choices which could easily lead to cliché and/or melodrama. It was my hope that I might minimize those risks through formal means, namely by deploying an affectless tone, flattened syntax, and tick-tock parallelisms throughout. I hoped too that keeping a tight lid on the poem’s structures would reinforce the sense of repression that defines the couple’s relationship. I don’t know whether I’ve succeeded or not. If someone were to accuse the poem of being melodramatic I wouldn’t argue.

When I get to a certain point with a poem and decide it’s acceptable to me, I start sending it out, but I’ll keep returning to it and fussing with it right up until the final moments before it’s published. Once it’s in print, though, it’s dead to me. You’ve got to de-cathect at that point, lest you enter an endless melancholy of revision.

This poem began as a combination of autobiographical and imaginary details. At some point, the people in it were no longer the people I knew in real life; they’d become characters instead. I never understand how that happens, exactly, but it always does. Many of my early drafts of this poem and other poems have real people in them, but none of my published poems do.

The moment in this poem I’m proudest of is the switch from past tense to the imperfect: “they liked to fire” instead of the expected “they fired.” At that moment what had appeared to be the recounting of a narrative is revealed to be the description of a condition. It is my tiny homage to Flaubert’s use of the imperfect in Madame Bovary. What a pretentious bastard I am! But you asked, so I’ve answered. I’m comforted too by the certainty that no one else has noticed or will ever notice that little shift. Do all poets have tiny triumphs of exactitude and necessity buried in their poems that bring them little bubbles of pleasure but which are almost certainly all but invisible to anyone else? I’m guessing probably.

The writing of this poem probably took about twelve hours, but they were stretched out over as many years, so a lot of different books passed under my nose during that time. I remember I was reading Bruce Chatwin when I started it, but I don’t think that matters.

Nothing very specific, no, but your asking that makes me think it might be a good idea to dream up such a reader. I remember how much pleasure I experienced as an undergraduate reading poems in the pillow room of the Sarah Lawrence College library. My ideal reader might be the student who’s there now in my place. Or maybe it’s the me from then?

Yes, there are four or five friends whose poems I read and who read mine, though in recent years we’ve exchanged less.

I’ve written a number of poems with strategies similar to those in this poem, and a bunch more that are different in pretty much every way imaginable.

Abandoned; they all are.
Posted by Brian Brodeur at 1:09 PM