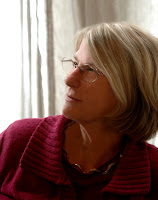 Betsy Sholl’s seventh collection of poetry is Rough Cradle (Alice James Books, 2009). Her previous collections include Late Psalm and Don’t Explain (University of Wisconsin, 2004 and 1997) and The Red Line (University of Pittsburgh, 1992). Her awards include the Felix Pollak Prize and the AWP Prize for Poetry. She is the recipient of grants from the NEA and the Maine Arts Commission, and was named Poet Laureate of Maine in 2006, a five year term. The Spring 2010 issue of Brilliant Corners includes an interview with her. She teaches at the University of Southern Maine and in the Vermont College of Fine Arts MFA in Writing Program.

Here, on solid ground, a blue jay lands,
beautifully and shrill, looking right at me,
banging a seed over and over, as if

he’ll never get it right—another creature
I once crudely dismissed. I'm sorry
for all my old arrogant thoughts,

for the man who followed me
one whole summer, a grabber, swallower,
a devil in Bermuda shorts. But really,

his hands were so thin and shaky,
it was easy to slip through,
all it cost me was an old blouse,

the buttons flying off into the pine needles
and white sand of our struggle.
I left him on his knees weeping,

my blue shirt dripping from his hands.
Of course, I said No. But I’m sorry
I said it so fiercely that day

there wasn’t room for pity or anything else.
I’m not sorry I said No to the storm tide
that dragged me out, then tossed me back

such a total No, it became a kind of Yes,
so the world was suddenly everything at once,
solid and shifty, stormy and calm.

For years I told this story all wrong.
Even now, my words are just a net
holding fish, while the sea itself slides through,

that slippery, unfathomable
Yes & No, that everything-at-once
impossible to name—

even if you were spared,
even if you have many more songs
than the harsh one you learned so well.

I began this poem several years ago, and had to let it sit for a long time. It began when I watched a young (small, at least) blue jay at the feeder, and the first few associations came quickly. At some point, the poem stalled out; I just couldn't see how to end it.

I’m guessing this one went through several dozen revisions. I got it so far, and it wasn’t working. Every ending I tried seemed strained, forced, pretentious. I put the poem into and then took it out of a book manuscript that was published in 2004. But something about the poem kept haunting me, so I looked at it again some time later, and it finally appeared in a book in 2009.

I do think things can come to us in a way that feels like a gift, when everything aligns—receptivity, energy, the right language, the appropriate memory or experience. I also think that inspiration can come at any point in the process, not just in the initial draft, but after much head banging and tears. Maybe that’s where hard work and inspiration meet, in the dogged attention to drafts, which can suddenly take a surprising turn. I’m not sure about this one, but suspect the beginning and end were more “received” and the middle was more a matter of sweat.

I was trying to be as loosely associative and subjective as possible. I didn’t want the poem to take its narrative too seriously. There was something bigger than the story of a girl being molested or nearly drowning, something about how our interpretation of experience can change over time, our sense of meaning shift or enlarge. I wanted to get at how the world shifts and becomes more complex, also at how the self becomes complicit in its reactions to experience.

I don’t remember, really. The poem was fluid, in process for so long, I’m not even sure it was totally finished when it first appeared in print.

Some poems take longer than others—this poem took considerably (miserably) longer than most. I probably let most poems sit a good six months, even after I’ve shown them to friends and pretty much decided they’re done. I don’t have rigid rules about that, but just know that a poem is usually done six months after I first think it’s done. Some poems come much faster than others and need less labor, so they get sent out sooner.

I often think memory operates like fiction, looking at events from a limited point of view, emphasizing some elements, dropping others, shaping a narrative out of the fragments; so even what we tend to think of as “fact” may be fictional as well. In this case, I was molested as a young teen and I did almost drown around the same time. The drowning comes up in several poems; it’s become a bit of an obsession. But I didn’t feel particularly interested in those facts as much as the more subjective response to them, that watery way the sense of an experience changes. I definitely remember blacking out in the water and coming to on shore. I can still see the beach I woke up on in detail. In-Between is all invention. My interest was in how that sort of experience shapes or misshapes a person, and has to be continually reconsidered.

It definitely has narrative elements, but I’m not sure it’s primarily narrative. I think the imagination tends to take over in a more lyric way, making associative leaps. Magical realism would be too strong and too lovely, a term, but I’d say it was partially inspired by that concept. In many of the poems I love narrative and lyric elements work together, so what’s mysterious and inexplicable bumps up against what’s recognizable, and the two aspects transform each other.

I remember that I had been reading Adelia Prado's Alphabet in the Park, translated by Ellen Watson. I think the freshness of her voice, her use of wild associations definitely played a part in the first drafts of this poem. Beyond that, I started this so long ago I don’t remember who else I might have been reading.

With this poem, I was trying to learn something through the writing, so maybe it was written more for my own edification. But I like Mandelstam’s sense of the reader being like a stranger who walks along the shore and finds a bottle with its message inside, the stranger to whom we might say more intimate things than we would to someone we actually know. Sometimes I find myself imagining a reader who is utterly unsympathetic, unwilling to cut me any slack at all. I argue with that person in my head, and sometimes in the poems. So my imagined reader, when I have one, usually late in the process, alternates between someone who might share my sensibility and someone who is critically severe.

I know I showed an early draft to my husband, and I know the poet Ted Deppe read it more than once and offered excellent counsel. I’m pretty sure David Jauss, poet and fiction writer, would have read this. I usually run poems by a small group of local poets and several other individual poets—whose response is usually somewhere between the two imagined readers above.

I think it’s the only time I’ve referred to that experience of being molested. It may be a little more subjective than a lot of my poems, given that the speaker imagines herself a blue jay at the end.

Well, I had an American jay in mind—as opposed to a European jay. I think the notion of rethinking one’s take on the world is particularly characteristic to my generation of (once) American youth, who were taught to see the world through textbooks which whitewashed our society’s more egregious and violent policies. We had a big awakening during the civil rights and anti-war movements. How much of that informs this poem, I’m not sure, but I wonder if rethinking an experience, apologizing for misjudgments is something my generation is familiar with. Perhaps too that sense of having been spared is connected on some level to being an American.

I’d say abandoned, after many attempts at resuscitation. Hopefully, with enough life support to not gurgle and croak in the street.
Posted by Brian Brodeur at 12:28 PM