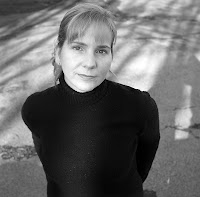 Lori Jakiela is the author of a memoir, Miss New York Has Everything (Hatchette/Grand Central Books) and two poetry chapbooks: Red Eye (Pudding House Press) and The Regulars (Liquid Paper Press). Her essays and poems have been published in The New York Times, The Washington Post, The Chicago Tribune, 5 AM, Chiron Review, Nerve Cowboy and elsewhere. She lives in Trafford, Pennsylvania.

The man in the emergency exit row has been drinking
from his own bottle of duty-free vodka
and because he was quiet about it,
kept his clothes on, and didn’t hit
his call button even once
no one notices until we land in Vegas
and he refuses to get off the plane.

He’s sure we haven’t gone anywhere.
“You people think I’m a sucker,” he says.
“I’m no sucker. I paid good money for this.”
He boarded in Pittsburgh, my home country.
In Pittsburgh, we have two dreams:
to go to Vegas to live
and to go to Florida to die.

The gate agents call the police.
The pilots are pissed.
The A-line flight attendant with the fake French name
twirls a pair of plastic handcuffs and says,
“These make me so-o-o hot.”

My father, who stopped drinking years ago
but never found his way, loved Vegas.
He’d carry a sweatsock full of good-luck
nickels through security
and get stopped every time.
He died at home in a rented hospital bed
in Pittsburgh, not Florida.

“Sir,” I say to the drunk on the plane
who squeezes his eyes shut so he doesn’t have to see me.
“Please put your shoes on.”

I was a flight attendant for almost seven years. When I took the job, I thought I’d write like crazy, just bang out poems in hotel rooms all over the world. It was a very romantic idea. But the reality of the job meant I was tired and jet-lagged. My feet swelled. My legs hurt. My fingers bled from popping soda cans all day. I was hung-over a lot. So instead of writing full-on, I took a lot of notes on cocktail napkins and on the backs of airsickness bags and in the margins of on-board magazines. This poem started that way. The narrative in the poem is pretty much reportage – the guy on the plane, what he does. The under-narrative is a kind of reportage, too, though the internal kind. It’s about as fashionable as a mullet to talk about narrative poetry these days. It’s probably less fashionable to admit to autobiography and reportage in poems, but, well, there you go.

I revise a lot. If I count the note-taking stage of the poem, we’re talking almost 10 years between the first and final version.

The reportage part, I think, was received. It was a gift for me to be there in that place and have this moment with a stranger. It was a gift the way that moment resonated and allowed me to make the leap between that moment and other moments, to link the external and internal narratives. That leap, I think, is something that happens in the unconscious. The crafting of those moments, turning reportage into a poem, that’s the conscious work. That’s the sweat and tears.

The writers I love most – West Coast poets like Gerald Locklin, Joan Jobe Smith, Charles Bukowski; East Coasters like Ed Ochester, Ed Field, William Matthews -- are so direct. Their language is plain. It looks simple. Easy. And I can’t think of anything more difficult. Is pursuit of clarity technique? Maybe. I hope so. I want to make sense. I want to be clear and say something true about the world, my world. I recently saw a statement from an editor who said “I am certainly not advocating a return to know-nothing plainspeak.” Since when does plainspeak equal know-nothing? I’m not talking about dangerously folksy politicians here. I’m talking about art. I think it’s very scary to be direct and clear – in a poem, in prose, in life -- because people will be able to see you. Really see you. It’s very vulnerable, being seen. But I’m not much interested in playing around with language for the sake of playing around. I’m not interested in toying with readers. I’m with Vonnegut on this: pity the readers. I have very little patience with pyrotechnics. We all have so little time.

I sent it out and 5AM accepted it a few weeks later. The editors there are wonderful.

It varies. Some poems, like this one, go through many phases over such a long time that when they’re done, they’re done. Others that come more quickly have to sit a while. I’ve sent poems out before they were ready and sometimes they’ve been published and sometimes I’ve regretted it. A little.

I have a difficult time making things up, even when I’m writing fiction. Everything I write is grounded, one way or another, in facts, though they’re my facts, my interpretations, my connections and leaps. Everything in this poem is true – that sweatsock full of nickels, the vodka, the handcuffs, the flight route, the dialogue. I worked in journalism for a bit and still write for newspapers and magazines. It’s hard to get away from my instinct to report. Reporters look at the world in a certain way – most of us look for luminous human details, those tiny things others might overlook. We look for pieces of a story. We build narratives like some people build puzzles. In poems, I try to use what I find in the world to help make sense of things, to help give shape to experience.

So many influences. In addition to the folks I’ve mentioned above, I was likely reading Ray Carver’s poems at the time. Gerald Stern, that huge good heart. Judith Vollmer. Mary Oliver. And Hemingway. Always Hemingway. Hemingway keeps me grounded. Write one true sentence, then write another.

I hope I write for a very broad audience. I’d like as many people as possible to read my work. I’d love people who don’t read poetry or who say they don’t understand or like poetry to be able to read my poems and maybe connect with them in some way. In Pittsburgh, one of our daily newspapers runs poems every Saturday. In my neighborhood, when something in the paper is particularly moving or funny or sad, people cut it out and stick it on their refrigerators. So that’s what I want to be: the kind of writer who’d make it to somebody’s fridge.

My husband Dave Newman is an amazing poet and fiction writer. He’s my reader and I’m honored to be his. I loved his writing long before I knew him. He’s very direct, very clear, very brave in his work. And he’s completely honest as a reader. He’s also a terrific line editor. On this poem, I think he made a few cuts that tightened the pacing and music of the poem.

It’s actually very similar to a lot of what I’m doing now. It’s different from my older poems because it’s more direct, less consciously artsy, and the speaker – me – is more present. In my older poems, I tended to erase the speaker quite a bit. I was more comfortable reporting about other people than I was with writing about myself. My speaker is much more vulnerable, more visible these days.

As an American writer, it’s hard to say what’s American. All of this – the setting, the Vegas dreams, the interactions between people -- seems American to me. I have a French friend who says he likes Americans because we’re gritty. So maybe that’s it. This poem is American because it’s gritty.

Finished. I hope. I don’t like abandonment, the hopelessness of all that.
Posted by Brian Brodeur at 9:18 AM