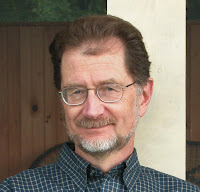 Roger Mitchell’s new and selected, Lemon Peeled the Moment Before, came out from Ausable Press in 2008. The author of ten books of poetry, he has won the Midland Prize in poetry and the Akron Prize in poetry plus fellowships from the NEA, Lilly Foundation, Indiana Arts Commission, and New York Foundation for the Arts. He lives in way upstate New York with his wife, the fiction writer, Dorian Gossy.


VARIATIONS ON A THEME BY SEVERAL HANDS

I’m in no hurry, but I’d like to say
that I will die somewhere. Rio, maybe.
I’ve never been to Rio. Never died
either, quite. Rio in a taxi, say,
my shirt open in the heat, my palms sweaty,
having never wanted to go to Rio,
except at the end, and only for a way
they have of steaming mussels, in wine,
which I’ll hear about in Phoenix in the rain,
when I go to Phoenix for some reason
now withheld. It will be hot in Phoenix,
and, except for that particular day, dry,
and I will probably ask myself why
Phoenix, but only as rhetorical evasion,
for I will know then why. Know, in fact,
everything I need to know. And the vendors
on the street will smile and talk about the weather,
hoping I might buy some small cadeau,
not for the money it will make them, but
for the need they’ll see somewhere in my face
for something to hang loosely around my neck,
a stone perhaps, a leaf, a simple bauble,
for the ride I’ll take in Rio in a cab,
the driver asking me in broken English
the name of my hotel, whether I know
his uncle in Des Moines, not to worry
about the end—he’s given death a ride
before—last week in fact, a man in white,
a clean white suit, quite fitting, leather pumps.
He sat where you sit, leaning slightly
to the left, his hand quivering, face blue.
Otherwise, no resemblance to you.

I started this poem on September 14, 2004. I was teaching that month in Colorado. It was a concentrated course on poetry which met for three hours a day five days a week. Papers and assignments came at us with blinding speed. The poem was one I had wanted to write for a long time, years in fact, but why I chose this moment, I don’t know. It may have had something to do with being away from home, living, as I hadn’t in years, alone in an apartment. I owe the idea for the poem to several people since it’s modeled on Vallejo’s poem beginning, “I will die in Paris in the rain.” Donald Justice, of course, used it to write his poem beginning, “I will die in Miami in the sun.” When I taught at Indiana, my colleague, the poet Maura Stanton, who had had Justice as a teacher at Iowa, one day showed me an exercise she liked to give her students in poetry workshops, which was, write a poem of your own modeled on the Justice poem. Hmm, I thought, there’s an exercise I’d like to try. Fifteen or so years later I did. Right away, though, I had to face a choice. Where did I think I would die? Answer: I had no idea. Or, I was/am pretty sure it won’t be Rio. So, a part of the poem is pure, grisly play.

This doesn’t often happen with me, but I knew right away I had hold of something that would work. After ten or twelve revisions over the course on five or six weeks, it was ready to go. The idea seemed all but foolproof. It may be the oldest idea in the world, putting your fear of death at a distance by objectively contemplating it. Arranging your own funeral, that sort of thing. Making it seem like a ride in a taxi, common, no big deal.

Henry James used to talk about a story’s “donnee,” something given the author which essentially makes the story. He found these things in various ways, including in and through the writing. I sometimes know that I want to write a poem about a particular event, person, or subject, but the real mystery happens for me in the writing. I turn a corner in a sentence, and words seem to fall out of the air. Once again, so it seems, I’ve managed to lift the lid on the subconscious and found a fragment of its suppressed contents. If that’s inspiration, then yes, I believe in it. But the sweating is real. In fact, I think the sweating leads to the surprises. As they say in the theatre, you make your breaks. He who waits around for them doesn’t get them.

Gradually. It started as a free verse poem, one with plenty of rhythm and even rhyme, but no regular pattern of either. The first line was simply, “I would like to say.” The rhythm there is quite pronounced and probably helped lead me toward meter itself. The first draft, as it went on, started falling into whole lines of iambic pentameter, so after a few more drafts, it was easy to slide right into it. Rhyme seemed wrong for the poem right away, so the “why/dry” rhyme that’s still in the poem sticks out. I even tried to get rid of it.

I sent it to Arts & Letters in December of ‘04. It was accepted the following February and published in the Spring 2006 issue.

I have no set amount of time to wait. If I feel that a poem is good right away, I sometimes risk sending it out soon. But I’ve been burned enough by that sort of enthusiasm that I usually wait a few months. I try to forget it so I can look at it with a fresh eye. With a few poems, including one I published recently, the waiting can turn out to be as much as thirty years. Poems that get repeatedly rejected usually just go away, but in a few cases they stick with me. So I dig it out of the files and, if it still seems alive, I send it out again. It’s a little like reviving a corpse.

This poem is really a fantasy, but a fantasy about a very real (future) event. You could say that this poem can only be a fantasy, but it might certainly have been less of one than it was. I’ll probably die in some hospital or hospice in one of the small mountain towns near where I live, unless I bail out and go to Florida and collapse of heat exhaustion in some mall parking lot. (As you see, I’m already starting to write my poem’s anti-poem.) So, the imagining in the poem is marked by willful extravagance, elaborate subterfuge, strategies designed to try (and fail) to beat death at his own game. To even think of it as a game, in the first place. A little French (cadeau), some dancing pumps, Rio in a taxi, etc. We don’t know very much about the future, but we sure know how to pretend.

Could you briefly address the role of humor in this poem? Or is “wit” a better word?

I think invention drives the poem, humorous invention with a black edge. It plays on the difference between the invention and the likely future scenario.

The poem speculates narratively, thinks or meditates by way of narratively linked images.

As I’ve said, the poem grows deliberately out of two great poems, Vallejo’s and Justice’s. Both of them include a glimpse, like mine of the taxi driver, of ordinary people nearby going about their ordinary business. What is it Auden says about “the expensive delicate ship” in his poem about the fall of Icarus? It “had somewhere to get to and sailed calmly on.” And, who knows, it may have helped that I was teaching an introduction to poetry course at the time and hence re-reading most of the great chestnuts of English and American poetry. One small gesture toward “tradition” hides in the use of the term “several hands,” a locution of acknowledged debt scattered thinly across English poetry in the last few centuries.

This is an over-used word, but I’ll use it anyway. The “music” of the language makes a huge difference to me, so I test it by reading poems aloud. I sometimes pretend I’m giving a reading somewhere, and it’s in those fantasies that I suppose I imagine ideal readers. Not one, but rooms full of the ardent as well as the skeptical who have come to get what they’ve heard (or they already know) poetry can deliver. Behind me are the professors, critics, and poets from whom I’ve learned most of what I know, and I look now and then over my shoulder at them, but in my little piece of self-theatre I face an audience of what Virginia Woolf called common readers, people who read because they know that’s where the truth is.

Did you let anyone see drafts of this poem before you finished it?

My wife, Dorian Gossy, sees all the work I think is finished (some of which is then shown not to be) plus all the work I know has problems which I’m stumped by. She is an excellent reader, has saved me countless embarrassments, and made not a few improvements. For the past several years, as well, I’ve exchanged poems occasionally with Tam Neville and Bert Stern, both of whom are very accomplished poets and critics.

All my poems differ from one another, and all of them are “about” or “involve” the same guy pushing his way poem by poem through the thicket of the moment which is powerfully crammed with asparagus and philosophy, dread and whatever that other stuff is.

The language. I may play around with a few fancy words (“bauble,” “rhetorical evasion,” not to mention “cadeau”), but, as Marianne Moore once said, the language is more like plain American that even cats and dogs can understand. It’s in the contractions and words like “sweaty,” as well as phrases that more or less naturalize the experience like “not to worry,” “I’m in no hurry,” “talk about the weather.” But there’s also a broad strain of internationalism in the poem, which is uniquely American, the longing to know the rest of the world, since we’ve all come from it, and so in some way come from all of it. See Poe, Hawthorne, Melville, Twain, James, Eliot, Pound, Hemingway, Fitzgerald, Stein, etc., ad inf.
Posted by Brian Brodeur at 1:34 PM