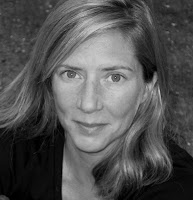 Nancy K. Pearson’s first book of poems, Two Minutes of Light (Perugia Press, 2008), won the 2009 L.L. Winship/PEN New England Award and is currently a finalist for a Lambda Literary Award. Her poems have been published in journals such as The Iowa Review, Black Warrior Review, Indiana Review, and Hayden’s Ferry Review. Pearson has received numerous awards including two seven-month poetry fellowships at The Fine Arts Work Center in Provincetown. Originally from Chattanooga, TN, she now lives on Cape Cod.

1.
I lost my straight shooter, a sawed-off sparkplug
somewhere in a cheap motel.
All night, I search for pipes —
tire gauge, rusted beer can, hollowed-out cigar.

Months ago, I drove across the country,
left my home in the wet hills of Tennessee,
found the unfolding pageant of billboards,
squashed possum, tugboat clouds,

hills repeating hills, freewheeling leaves going insane.
Thought I could drive my past away.
I’m here now and hunched over,
searching for a boost.

Behind me, that red suspension bridge
sinks into the deep fog,
leaves this bright world behind
for another.

2.
Strung out, Silva and I need a bump.
The wind, spring-loaded and snap-buckling
through the cypress, creeps in,
splinters the stash thin across the motel floor.

We are crawling and picking through the carpet.
Silva says, stop pushing my head down, Reggie,
my knees got seeds mashed in them.
Night is a rerun rerun. Fight over a pebble high:

that long five minutes. Reggie watches us buck and kiss.
Silva on the floor again. (Stop pushing my head down, Reg.)
The shag hooks her silver hoop —
ear snagged and hanging off

like old fish bait. Stuck down there,
someone just cover her up.

3.
Silva’s in the hallway bathroom.
She’s clawing up her face again.
Reggie is laughing real loud,
Silva, you a goddamn puller now.

I don’t want to see her face,
her skin peeling off her cheekbone,
pores torn bigger, a face on hinges.
I’m high and want to feel her tits,

put my mouth on her hard nipples.
Fuck Reggie’s laughing.
I don’t want to think about the scabs,
the other night, me with my panties

twisted up in my crack,
biting down hard on her,
getting up quickly
with blood in my teeth,

peeing in the free-standing sink
in the middle of the room,
my thighs shaking
like the hind legs of a dog.

4.
I carry my index finger in my hand.
I cut it off earlier, straight through the bone
just to see if I could.
I cup it warily

as if the bone could beat free,
a broken bird with flittering wings.
The hospital is down Fillmore Street.
I walk with a spring, kick an old donut

eaten out by ants, shoot it right into a drain.
God, I’m good. Good god.

5.
Jimmy has a tattoo of a beet on his left arm.
People often mistake it for an organ.
I like the idea of someone who loves taproots so much
he’ll suffer an afternoon under the needle

for a swollen red stem. That Jimmy.
I want to see him again and the other gay boys from Greens
with their clean haircuts and brilliant skin.
Tonight, Silva yells, honey git me my wig and I do.

Her left arm is swollen up like an udder,
her silver rings cut deep into her ashen skin.
Somewhere, young Jimmy chops onions and parsley,
his tuber tattoo beating like a purplish heart.

6.
Silva runs down the hallway after Reggie
leaving with the stash. Her feet sound like stakes
shoving into the floor.
Silva, eat something for god’s sake,

I yell and don’t know why I’m yelling this right now.
I think of an old cow, wobbling on thin ankles,
spine like a curtain rod, skin in the breeze.
Baby, she says later, throat full of smoke, open your mouth.

The sweet crack flows into me.
I touch her teeth with my tongue.
They are cow-licked and scoured out.
Baby, she says, you’ve got it bad.

The poem started in the summer of 2003. I wrote much of it from my small cubicle at The State Department, a post-MFA job that required me to fill in zip codes. So, the government actually helped support the writing of this poem.

The poem began as a one-stanza piece about the Golden Gate Bridge. I never intended to write a six-part poem about a woman’s experience in a crack motel. Once I wrote the first part, however, I knew I needed to finish the speaker’s story. The poem is a collage that pieces together notes I’d written on napkins, on newspaper and in journals almost ten years ago while I was living in San Francisco.

I’d say the poem went through about ten major drafts. I made other edits over the course of a few years. I abandoned the poem for a while. I stopped believing in the project or, rather, my ability to write about the subject matter. I thought the poem needed a happy ending and I didn’t have one. I gave that up after about a year. The poem was officially finished in 2006, I think.

The poem was difficult to write for so many reasons. I was “inspired” to write the poem, but that’s like saying I was inspired to pray. Once I began the actual writing, I worked very hard, sometimes for eight or nine hours at a time. I had to immerse myself in the world of the speaker to keep from being sentimental. I wrested with the details and the language. I wanted to find the most accurate language to describe the motel and the people living in it. The physical details, the one’s I took from my notes and from memory, served as an anchor for the larger concerns in the poem.

I tried very hard to get that so called “genius of place” in the poem. In his poem, “Tower Beyond Tragedy,” Robinson Jeffers writes, “I have fallen in love outward.” In a way, I had to fall in love with the hellish place/time in this San Francisco streetscape. I had to care about it.

I tried making the whole poem rhyme. That was a failure, but I purposely wrote in sonnet-like form. I needed to contain hell, so to speak. Back in 2005, I had seven parts, as well as a prologue, epilogue and a dream series. I imagined the whole poem would be book-length one day. Can you imagine a whole book about this motel room?

Two years. The poem was the runner-up for The Iowa Review Award and was published there in 2007. Two years after that, it was reprinted in Ordinary Genius: A Guide for The Poet Within by Kim Addonizio (Norton, 2009).

I let my poems sit for many months. Usually.

Oh no, this question! Well, after I did a reading for about twenty seventy-year-olds at the tiny West Tisbury Library on Martha’s Vineyard, a woman came up to me and said, “I know of a great AA meeting you can join right now. It’s down the street from here.” People assume my poems are autobiographical and often assume the I/me in the poem is still living in the crack motel or the psychiatric ward. It’s like I’ve gotten a “day pass” from the ward to come out and read poetry. I can’t blame them. I am the speaker in most of my poems. It’s ugly and embarrassing, yes. Of course, I’ve changed details and embellished. To answer your question, Brian, I actually lived in the motel in The Motel by the Hour, but I’m not consistently the speaker in this poem.

More narrative than most of my poems.

I think I was reading C.D. Wright and Mark Doty then. I’m still reading them. I’d say I’m influenced by every poem I read.

I don’t have an ideal reader and I try not to think of an audience while I write. I’m in my own world of line breaks and rhythm while I’m crafting a poem. But as soon as I stop the actual writing, I start thinking about audience. I love to write. The solitary act of writing energizes me. But I’m also thrilled when someone (a judge, a critic, a friend) reads my work and likes it. Kay Ryan said it better (in Poetry, April 2005) when she said, “When I am writing, I feel that I have insinuated myself at the long, long desk of the gods of literature—more like a trestle table, actually—so long that the gods (who are also eating, disputing, and whatnot as well as writing) fade away in the distance according to the laws of Renaissance perspective. I am at the table of the gods and I want them to like me. There I've said it.”

I let you see it, Brian. And a few other people in that post-MFA GMU group. Usually, I don’t share my work with anyone. Ashley Capps and I may start sharing poems, though. I feel very shy about this.

I think this poem is less image-driven than some of my others poems. It’s a story, like many of my poems, but a story with more characters and dialogue. There’s no remorse or guilt, no “aha” moment in the poem, either. The speaker isn’t redeemed. It’s ironic. You know, I’d like to write more poems like this. Why do I always try to find redemption?

Reggie and Silva and Jimmy and every other gritty detail.

Both, but ultimately finished.


NOTE: "At the Motel-by-the-Hour" was first published in The Iowa Review, Winter 2007/8 and was reprinted in Ordinary Genius: A Guide for The Poet Within by Kim Addonizio, Norton, 2009.
Posted by Brian Brodeur at 11:25 AM