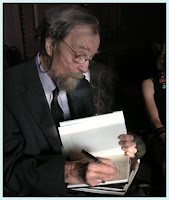 Donald Hall is widely read and loved for his award-winning poetry, fiction, essays, and children’s literature. He has published sixteen collections of poetry, most recently White Apples and the Taste of Stone: Selected Poems 1946 – 2006. A former poet laureate of the United States, Hall is a member of the American Academy of Arts and Letters. His honors include two Guggenheim fellowships, the Poetry Society of America’s Robert Frost Silver medal, a Lifetime Achievement award from the New Hampshire Writers and Publisher Project, and the Ruth Lilly Prize for poetry. Hall lives on his ancestral farm in Wilmot, New Hampshire.

To grow old is to lose everything.
Aging, everybody knows it.
Even when we are young,
we glimpse it sometimes, and nod our heads
when a grandfather dies.
Then we row for years on the midsummer
pond, ignorant and content. But a marriage,
that began without harm, scatters
into debris on the shore,
and a friend from school drops
cold on a rocky strand.
If a new love carries us
past middle age, our wife will die
at her strongest and most beautiful.
New women come and go. All go.
The pretty lover who announces
that she is temporary
is temporary. The bold woman,
middle-aged against our old age,
sinks under an anxiety she cannot withstand.
Another friend of decades estranges himself
in words that pollute thirty years.
Let us stifle under mud at the pond's edge
and affirm that it is fitting
and delicious to lose everything.

I’m not sure when I wrote it. Something like 2000? It started with the first line, not particularly original, but flashing in my mind and leading on.

Fewer revisions than usual. If I had to make a guess I would say thirty-five. Over four or five months?

Some inspiration. I remember that first line came accompanied by an energy and a momentum. But I have to keep a poem around and keep staring at it, changing a word every day or week.

At some point I realized that I had a liquid, or muddy, metaphorical area. I remember, in the lines about the lapsed friendship, having “ruin” or “destroy”—and changing it to “pollute.” It was a late revision.

I do not remember how long I let it lay about. I remember sending it out to the New Yorker thinking that the end of it did not work, and wondering whether I should send it or not. Unlike most of my New Yorker poems, this one was accepted immediately and published in just a couple of weeks. Sometimes I wait a year and a half.

Often I let a poem sit around for a year or so. It depends. When I have finished something, or taken it to a point where I don’t know what to do next, I show it to friends. I listen, make changes or not, and let it sit around some more.

I always opt for fiction if it makes the poem any better. The first friend who died did not die near a body of water.

I don’t think it’s a narrative.

I have no notion of influences. This is not a denial.

I never have an audience in mind. At some point I am aware of a level of audience. When I work, I have no sense of myself or of any one to whom I am writing.

I have no recollection of anybody’s response. I am sure I showed it to friends.

There are so many differences among my poems, formal with line-length or concentration on a long line or on a short line and assonance, narrative, rhyme, etcetera. I don’t think that this one differs from some others. But how would I know?

I don’t know. It was written by an American.

I certainly thought a lot about abandoning it. Obviously I didn’t. I’m glad I didn’t. I have had much response to it since its publication.
Posted by Brian Brodeur at 10:34 AM