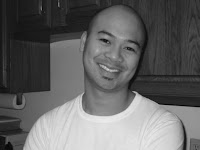 Oliver de la Paz is the author of two collections of poetry, Names Above Houses, and Furious Lullaby (both from SIU Press). He chairs the advisory board of Kundiman, a not-for-profit organization dedicated to the promotion of Asian American Poetry. A recipient of a NYFA Fellowship Award, his work has appeared in journals like Virginia Quarterly Review, North American Review, Tin House and in anthologies such as Asian American Poetry: The Next Generation. He teaches at Western Washington University.

The first word in our catechism was “holy,”
and we would march up the aisle, boys matched with girls,
our hands folded while we soaked in grace from the blue
light of stained glass. We were a river of blessings.

I wanted to be “holy,” and I had practiced
my prayers before a mirror until I looked like a statue
or a ghost. No one could deny me this office
and I walked with my eyes toward the altar.

No one drifted. No one held their breath.
I didn’t have visions of angels then.
I could only hold my place, keeping my chin up
as if I were swimming. What else is there to know

about divinity? What else is there to know
about the poverty of a word?

The poem was written in the Fall of 2001. I had just started my first tenure track job in upstate New York and I was teaching an introduction to poetry class. One of the poems I had been teaching my students was Robert Hayden’s “Those Winter Sundays.” I taught two sections of the course, so in my preparations for lectures, I practically had the poem memorized. What I love most about Hayden’s poem is its rhetorical subtlety, which, after stressing this point to my students, was not lost on them. What ended up triggering “Holiness” was Hayden’s last two lines of the poem, “What did I know, what did I know / of love’s austere and lonely offices?” I wound up echoing Hayden at the end of “Holiness” with the lines, “. . . What else is there to know // about divinity? What else is there to know / about the poverty of a word?”

The poem underwent very few revisions after its initial composition. My revision process may be a little unorthodox. I tend to revise as I’m composing, so it winds up taking me a bit longer to compose a poem, but once it’s “done” it’s “done.” So basically, very little time elapsed from the point of initial composition to the poem’s “final” state.

As I mentioned, the poem was certainly “received.” I’m a big believer in the mantra that books beget other books. I’m not a writer who’ll sit at a desk, stare at a blank screen, and painfully bang away a few words, sentences, or lines that I ultimately regret. When I’m ready to write, I go to the word processor. Such was the case for “Holiness.” I had been living with Robert Hayden for such a long time, I needed to find a way to pay him homage.

I immediately had conceived that the poem would be a sonnet or sonnet-like. There was an argument at the core of the idea of holiness and the sonnet form was, in my mind, an ideal container for questioning belief.

It didn’t take long for the poem to find a home. I sent it out in October of 2001 and it landed in Sou’wester’s Fall 2002 issue. I hadn’t been sending it to many other journals.

The fermentation time from poem draft to journal/magazine submission really depends. When I send work out, so much depends on what poems I send along together. I’ll sit on an individual poem until I think I’ve found companions for the poem in an envelope. This practice does vary, but it’s my usual modus operandi.

Much of the poem is based on my remembrance of my Catholic school upbringing. The first word in our catechism was, quite literally, “holy.” The priest extended his arms outward and said “Holy lord . . .” The poem is also a number of memories or narratives spliced together into one narrative. I had in my mind the image of myself as a young boy marching to the altar to receive my first communion. But we also marched in procession to the altar for a number of different things: confession, preparing for scripture class, etc. If readers are looking for a literal matter-of-fact play-by-play of an event in a poem, then they’ll have to look elsewhere. “Holiness” is a collection of events, though I dare not call it fiction because what happens in the poem really did happen.

As I mentioned, Robert Hayden was the primary influence on the poem, but I was also reading The Branch Will Not Break—James Wright has killer ending lines. I always think of platform-divers who knife perfectly into the pool without splashing too much water when I think of Wright.

I always write to an audience. It makes it easier to write a poem when I imagine that I’m writing it to or for someone. For me, the act of reading, after all, is an act of intimacy—the reader engaging in a conversation with a writer. Likewise, writing for me is a direct address to someone.

So many of my recent poems have been epistolary pieces. I can’t, however, say that I’m writing to any singular person—though the beloved is always my wife, I’m not always writing to the beloved.

I didn’t, actually, share “Holiness” with anyone before I had finished it, because the poem was created, submitted, and accepted in such a short span of time.

Years ago, I didn’t share my work with anyone until I believed it to be ready, but lately, I’ve been corresponding with a group of writers for a month-long writing challenge during August. Among the group members are Aimee Nezukumatathil, Sandra Beasley, Erika Meitner, Mary Biddinger, and Jay Robinson . . . I feel I’m forgetting someone. Anyway, we’ve structured the month like NaPoWriMo in April, except we’re doing the work in August when many of us who have teaching obligations are free. It’s been a lot of fun and I suppose we’ve been writing for each other.

“Holiness” is the first poem in your second book Furious Lullaby. What made you decide to give it such a place of prominence in the manuscript?

The poem’s argumentative structure would have created a different resonance for the collection if it were, say, towards the end of the collection. Rather than serving as an entry for a debate, it would be, in some ways, punctuating an argument, and I didn’t want resolution for the collection.

If the poem were in the middle of the collection, it could, perhaps, be construed as a change in tone. After considering all the possibilities for the poem’s location, I finally decided that I wanted the primary idea of the collection to be put forth immediately.

I’m a messier poet syntactically. I write longer, winding lines with clausal breaks and a few more disruptions. Sometimes my referents are unclear. I’m aware of this foible because it’s also how I speak and how my parents speak. “Holiness,” in my mind, is easier to parse if you go sentence by sentence.

Such a sticky question! I have no idea! Is there something distinctly idiomatic about the poem that would allow it to be called “American”? For the longest time I’ve wondered if there is indeed something that makes a poem or a poet’s work “American.” Can I plead the fifth?

This particular poem was finished. I had explored what I wanted to explore and I was fairly happy with the results right away. Generally, though, I’m never truly finished with a poem. I do fiddle with poems that are in my two collections, especially when I give readings. Sometimes I change them consciously, for the reading.

NOTE: Some questions have been adapted from Fifty Contemporary Poets: The Creative Process, edited by Alberta T. Turner (White Plains, N.Y.: Longman, 1977).
Posted by Brian Brodeur at 9:19 AM