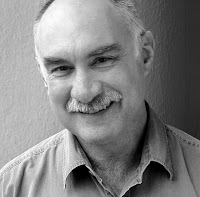 Al Maginnes is the author of six collections of poetry, most recently Film History (Word Tech Editions, 2005) a chapbook, Dry Glass Blues (Pudding House Publications, 2007) and Ghost Alphabet (2008), which won the 2007 White Pine Poetry Prize. His poems have appeared widely and he is the former recipient of a North Carolina Artist’s Grant. He lives with his family in Raleigh, NC and teaches at Wake Technical Community College.


WHAT MAPS WILL NOT SHOW


In a strange town, maps become liars.
Landmarks get left out or lie more distant
than illustrations show. Roads sprout
and bend off the memorized route
and by the time you arrive, the courthouse
is dark and locked for the night.
A woman I know gives directions
in terms of what used to be there—Turn
right on the road where Jones had the store
that burned down—assuming no distance
between her history and our own,
the way those who survive an event
are bound by it and a bit incredulous
the same mold has not shaped us all.
The lawyer stacking papers, the bailiff
locking each door he walks through,
the judge, his robe removed, pouring
the single drink he permits himself,
all remember the man awaiting sentencing
who seized an officer’s gun and swung
the barrel in a wide arc before pushing it
under his chin and pulling the trigger.
Seventeen years since then, and they never
speak of it, but if their eyes meet
in court or they pass in the hall,
they nod the casual greeting of those
who have known each other too long
for rank or ceremony. Last week,
the judge saw a man who had paid
to have the image of each internal organ
tattooed across his torso—heart, lungs,
liver. A car accident shattered him
and he lost a lung, a kidney, several yards
of intestine. His chest, road-mapped
by a maze of stitches, healed
into a scarred map of what was there
no longer. His crime was entering
the homes of women he thought he loved
and stealing small, unnecessary items.
When his sentence was given, he said nothing,
only limped from court. A woman
whose coffeepot he'd stolen studied
his movements, his silence, hoping
for some map to explain his actions.
If she sat in the judge’s chamber
to share his single shot of bourbon
or if the judge had come with her for coffee
she paid for and could not drink,
they would agree the sentence meant nothing.
It did not touch him, so it would not touch them.
The judge wouldn't tell her
that sometimes law and justice seem like towns
miles distant and sparsely populated,
invisible on most maps. That morning
he had hung up on a reporter who wanted
to write another story about the suicide
in the courtroom. The single time
she spoke to the man, he showed her
the inked outlines of his insides and smiled
with pride so bashful, she could not keep
her fingers from touching the broken skin
to feel what fluttered underneath, the muscle
of a heart working and untouched.

I believe this started in the late fall or early winter of 2004. I had the first line and the image of the man with his internal organs tattooed on his body. For me, a lot of poems come from the juxtaposition of two or three seemingly unrelated lines or images and trying to make them fit together.

This went through a lot of drafts, some in which I made only minor changes, others where I really moved things around. At one point the poem was a good deal longer than it finally appeared. I probably worked on this poem for a couple of months off and on—I’m always working on several poems at a time, so I don’t want to imply that this poem was my sole focus at the time.

I believe that inspiration happens, for me anyway, in getting poems started. Then comes the work of getting words on paper and changing them around. For me, writing poems is mostly fun, so “sweat and tears” might not be the right phrase, but certainly the bulk of any poem I write is the result of a lot of writing and rewriting.

Not really. The poem began and ended as a single long stanza. One of my quirks is that I like each line to be more or less the length of the one in front of it.

This was published a year and a half to two years after it was written. Generally, once I think a poem is done, I’ll send it out. This particular poem bounced off of several journals before ending up in The Comstock Review.

This poem is almost entirely fictional. The woman who gives directions “in terms of what used to be there” is someone I know, but other than that, the poem’s events are made up. As far as fact and fiction in poetry, I have never had any compunction about inserting fiction into even an autobiographical poem. As one of my professors said once, “We lie our way to the truth.”

I believe it is although I hope the narrative in the poem serves a larger purpose.

I read widely and unsystematically. I think I was reading a good deal of Richard Hugo, a poet I return to again and again, at the time, as well as George Looney and Christopher Buckley (the poet from California, not the novelist), whose work I was reviewing at the time. As far as influences, there are a lot of poets I love and return to over and over, but if I start naming them I’ll leave some out and feel bad about that later.

Not really. The idea of any audience is a bit novel to me. I’m still surprised when people tell me they’ve read poems of mine, even ones that have appeared in journals with a wide circulation or on a web site that gets a lot of visitors. That said, I’m really pleased when friends who are also poets I admire tell me they’ve liked something I’ve done.

I have a few friends who look at my poems once I have a batch I think they might like to see. I don’t show anyone a poem until I’m pretty confident that it’s finished or close to finished. Suzanne Cleary, Philip Terman and Walter Butts are three people who have been helpful with my poems in recent years.

After a lot of thought, I have to say I’m not sure.

I imagine an American setting for all my poems. The line “law and justice seem like towns/ miles distant and sparsely populated” conjures for me the small abandoned towns of the west that Hugo wrote so well about.

I think it was finished, as much as any poem is ever finished. Of course I could spend time tweaking it now if I wanted to, but I think there comes a time when it’s best to look forward to the next poem.
Posted by Brian Brodeur at 8:48 AM