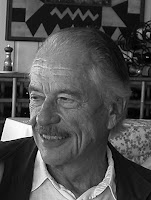 Richard Frost’s most recent collection of poems is Neighbor Blood, from Sarabande Books. During the past sixty years his poems have appeared in The Paris Review, New England Review, Poetry, Harper’s Magazine, Kenyon Review, Gettysburg Review, and many other journals. He is a working jazz drummer and is Emeritus Professor of English at the State University College, Oneonta, NY.

My brother’s wife phones me and says I’d better drive over
right away for what will probably be the last visit,
so I get in my mother’s old Buick and two hours later
I’m at their apartment at Smugglers’ Village in Stockton.
My brother’s life has been a mess all along.
He came out of the war a drunk, lost on the horses,
failed in real estate and fiction writing,
got a good job and wrecked two company cars.
He is alternately charming and a bully, and I probably
wouldn’t be his friend if he were not my brother.
Now he is dying of brain cancer. The surgeons
have removed an apricot-sized tumor from the back
of his head. He has regained the power of speech
but is dying fast. Here I find him standing
at the door in his brown leather jacket
and the blue knit sailor’s cap to hide his baldness.
No one has told him that he is going to die,
and like everyone else he believes he will live forever.
The first thing he tells me is that he has gained two pounds.
On his way back! He told his doctor to turn off the switch
if they couldn’t get the whole tumor. His doctor
let him wake up, so that means they took out the cancer,
and now he will have a long, gradual recovery,
which is all a “hell of a problem.” He is six feet tall
and weighs in at a hundred and twelve. Do I want some Scotch?
Back in the kitchen, his wife flits to and fro,
fixing a sandwich. She has hidden her bottles
for twenty years in the laundry basket,
behind the canned preserves and under the dresser.
She can’t remember things. Their little terrier
Packy hysterically yaps, rattling his claws
on the picture window, jumping down from the couch
and skidding into the kitchen. Do I want some Scotch?
Yes. And we talk about the war, our father,
the cars we’ve owned, the family fishing vacations.
My brother’s skin is yellow, and his eyes
are a very clear blue. He remembers the time
he was on the Ralph Edwards television show
This is Your Life, because he’d been a friend
of the Chicago policeman whose life this was. We talk
about this for a half hour. Do I want
more Scotch? Yes. His wife brings sandwiches
and three capsules for my brother. I am not making sense
because the dog wants out and my brother’s wife
is back there crying, and finally all I remember
is that we laugh about something. My brother and I
laugh about something we did. It is about
the time he faked an earthquake, or ate the ant
crawling along the drainboard, or stole the chairs
from the restaurant. I will never remember exactly
what it is we laugh about, but we laugh.
Then I drive home, across the bay
in the evening. It makes no sense at all.
I come home, and my brother’s wife is right
about that being the last visit.

My brother, fifteen years older and my only sibling, was my hero and role model and finally, as the poem suggests, a grand failure in life. He worked himself up to a high executive position with Pacific Gas & Electric and then self-destructed—killed himself with booze and cigarettes. He’s the subject of several of my poems. He showed me a lot about how to live and how not to.

How many revisions did this poem undergo? How much time elapsed between the first and final drafts? Do you believe in inspiration? How much of this poem was “received” and how much was the result of sweat and tears? How did this poem arrive at its final form? Did you consciously employ any principles of technique?

Some of my brother poems were stitched and unstitched for years. This one wrote itself pretty quickly, probably in less than a month. It’s a fairly straightforward telling. In a sense, my brother poems were handed to me by the unfortunate circumstances I wanted to set into order. The sweat and tears were in the events and needed to be turned into words that could suggest them to the reader. My main “technique” was to tell it in the loose five-stress lines that come naturally to me after long practice in the old forms. It’s regular talking, with the added pulse.

As a jazz musician, has music influenced your sense of the poetic line in any palpable way?

People always ask whether for me there’s cross-fertilization between jazz and poetry, since I’m a drummer. Music came naturally to me—I learned the forms before I knew what I’d learned. Poetry too was something like that. But they’re quite different. With my kind of music, it’s a simultaneous combining of old structures and improvised utterance, invented as it goes along, each moment a step in a composition created in real time. Poetry is more like formal musical composition. You can take as long as you wish piecing the thing together, and in the end the effect must be that of a natural sequence in real time. With that difference understood, I will say that probably the same sensitivity, comprehensions of rhythmic and tonal patterns, all the stuff that lets me play music, must be working somehow also when I’m writing.

The practice varies, but I’ve learned to wait awhile. Maybe the longer the better! (But, being practical, sooner or later one must turn the beast loose.) After the poem cools off for a week or two, one sees it more judiciously and can find the necessary tuning. I can always get back into the original feeling and revise, better after such a wait.

In this poem I didn’t lie as much as I often do. I’ve even lied about my brother. But in this case, I was given some pretty good whole cloth. Their dog actually was named Packy. Of course, it’s a narrative poem—which is what I do. I’m not smart enough to be a lyric poet like my wife, Carol Frost. She has flashes of metaphor and meditative insight that I wonder at and can’t approach. It’s probably why we’ve stayed together so happily for forty years. I love lyric poetry, yet I fall so naturally into storytelling. First comes one thing, then another, and next… It’s how my mind works. It gives me a chance to talk about the world as if I’m watching it happen, and I can remark about it as it goes along.

My ideal reader is someone like myself; or a beautiful, appreciative woman; or my dead brother. Mainly, someone who can hear and understand the language, and who understands irony.

I’m not in cahoots with a group, but I always ask Carol to look at my first draft, and I look at hers. I’m often helpful down on the punctuation and grammar level and with other small important matters. Carol tells me enormously important things, like the need to develop the poem beyond the elementary stage where I’m stuck or prematurely satisfied.

It’s one of my running narratives, like a lot of the others. Then I have the pithy ones.

I suppose that the basic events of the poem, with details changed, could translate into any other culture; language, more than anything else, is what makes it American. That’s when I really do follow in the steps of Whitman, as best I can. He began (overblown as his language often is) the American sound in our poetry.

Abandoned, with the exciting delusion that it’s finished. I reserve the right to add, delete, make any changes as long as I live. After that, it stays as it is.
Posted by Brian Brodeur at 10:41 AM