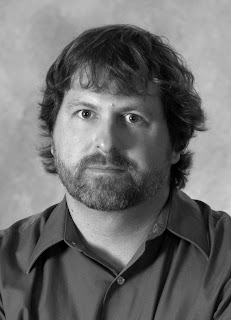 Dan Albergotti is the author of The Boatloads (BOA Editions, 2008), selected by Edward Hirsch as the winner of the 2007 A. Poulin, Jr. Poetry Prize. His poems have appeared in The Cincinnati Review, Shenandoah, The Southern Review, The Virginia Quarterly Review, and other journals. In 2008, his poem “What They’re Doing” was selected for Pushcart Prize XXXIII: Best of the Small Presses. A graduate of the MFA program at UNC Greensboro and former poetry editor of The Greensboro Review, Albergotti currently teaches creative writing and literature courses and edits the online journal Waccamaw at Coastal Carolina University in Conway, SC.


I sometimes wish I could find Cindy
to thank her for agreeing with my fine idea
that we sneak into the university chapel
late one night in 1983 to make love.
I don't just want to thank her for giving me
the trump card — “house of worship”—
I hold in every stupid party game that begins,
“Where's the strangest place you've ever . . . ?”
No, I want to thank her for the truth of it.
For knowing that the heart is holy even when
our own hearts were so frail and callow.
Truth: it was 1983; we were nineteen years old;
we lay below the altar and preached a quiet sermon
not just on the divinity of skin, but on the grace
of the heart beneath. It was the only homily
we knew, and our souls were beatified.
And if you say sentiment and cliché, then that
is what you say. What I know is what is sacred.
Lord of this other world, let me recall that night.
Let me again hear how our whispered exclamations
near the end seemed like rising hymnal rhythm,
and let me feel how those forgotten words came
from somewhere else and meant something.
Something, if only to the single moth
that, in the darkened air of that chapel,
fluttered its dusty wings around our heads.

I believe it was early 2004. I have a terrible time remembering these things. I don’t keep good records of draft composition, so I can’t say for certain. I do have an old note card that indicates I sent it out to a journal in April of 2004. How the poem started is an even murkier memory. I know that I’d toyed with writing a poem on that subject for a while, but how it came into this form—what initiated it—at that time I’m quite unsure. I may have been thinking about the structure I’d decided on for my full manuscript around that time. “Vestibule” ends up serving a prefatory function in that organization. More on that later.

Not many. Aside from a few words changed here or there, this one pretty much came out whole. I’d say that’s true for about half my poems. I’m obsessive about working ideas and rhythms and lines in my head, but I’m not as diligent as I wish I could make myself when it comes to working over poems on the page or screen. For me (and I don’t recommend this approach to my students, or anyone else for that matter) the majority of the work is often done before the first line is written. I’ve referred to this “method” before in an interview with Town Creek Poetry, where I liken my process to making soup.

I certainly don’t believe there’s a magic wind floating out there biding its time before willfully flowing through me to produce a divine text. But at the same time, I don’t think creating a poem is a purely mechanical, conscious process. I believe in trusting the subconscious mind. I think it’s an essential part of realizing yourself as a poet (or as any other sort of artist). If your art is entirely within the realm of your articulation, I don’t believe you’ve begun to tap your potential. As for how much of this poem is “received,” I’ll just say that I have no idea where the dusty-winged moth came from. I don’t know why it flew into my poem, but I’m very happy it’s there now.

No conscious employment of form or technique in this one. But I hope that the poem’s free verse lines reflect my experience with meter. I will always argue that the free verse poet who has never written in the old formal meters has denied him- or herself incredibly valuable lessons about rhythm that cannot be learned in any other way. I think—I hope—that I write a stronger free verse precisely because I’ve written sonnets and villanelles.

It does vary from poem to poem. But it’s hard to be a very good judge of one’s own poem’s status. Sometimes I feel very confident that a poem is ready only to realize much later that it wasn’t. Other times I think a poem isn’t entirely there but put it in the mail against my “better judgment” and then see it snatched up by the first editor and reveal itself, over time, to be wholly realized in that form. In the case of “Vestibule,” I believe I sent it out pretty soon after composition—in the spring of 2004—for consideration by journals. I never simultaneously submit work, so the poem spent a few years auditioning for 8-10 journal editors, returning home each time. It first saw print in The Boatloads in April 2008.

When I present this poem at a reading, I often follow it with this reminder to the audience: “Remember, you can never safely assume that the first-person speaker of a poem is autobiographical. Of course, you can’t rule it out either.”

I’d probably call it “meditative” before narrative, but more and more I find those sorts of distinctions to be unhelpful and distracting. I’d call it a poem. I don’t mean to disrespect the question—I’m just tired of poetic taxonomy these days.

I don’t know who I was reading, but I can say that the voice of Jack Gilbert is often in my ear. I think you can see a little of his influence on this poem, both in its stichic structure and its speaking of memory in sacred terms. But I say that with the knowledge that the author is usually the least qualified to make such observations. For all I know, my reading of Alan Shapiro or Brigit Pegeen Kelly could be all over this poem in a way I cannot see.

My ideal reader is the person born a couple hundred years from now who might read my poem and find it meaningful to his or her life.

I don’t have a regular group of readers. I used to share my work in process with others a good bit, but it’s a rarity now. I think it’s natural for that just to fade away after a while.

“Vestibule” is the first poem (or proem) in your first book. What made you decide to give it such a place of prominence in the manuscript?

The book’s organization is roughly liturgical, and I thought a poem titled after the entryway to a church would be an appropriate starting place. There’s also that audacious line, “What I know is what is sacred.” I thought that if I’m going to be arrogant enough to write that line, I should be bold enough to present it up front.

I feel particularly unqualified to answer that question meaningfully (see my answer to the “influences” question above). I think that, more often than not, we’re our own worst critics—not in the standard use of that cliché, but in the sense that we are unlikely to see what is most important or relevant in our own work. So, with respect, I’ll pass on the attempt.

I think one of the particularly American elements is not so much in the poem itself, but in the sense of transgression that’s the result of its American context. I imagine that if you conducted a poll, you’d find a much higher percentage of Americans than of Europeans offended by the idea of coitus in a church building. We’ve got a lot more uptight prudes on this side of the Atlantic.

Oh, far be it from me to wrestle with Paul Valéry. Abandoned, abandoned, all of them abandoned! But not abandoned until, as urged by Beckett, I had “failed better.” At least I hope so.
Posted by Brian Brodeur at 2:16 PM