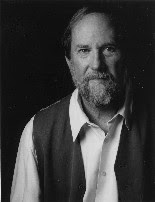 Stephen Dunn was born in New York City in 1939. Awarded the Pulitzer Prize for Different Hours (Norton, 2000), Dunn's other honors include the Academy Award for Literature, the James Wright Prize, and fellowships from the National Endowment for the Arts and the New Jersey State Council on the Arts. Dunn has worked as a professional basketball player, an advertising copywriter, and an editor, as well as professor of creative writing. His most recent book is What Goes On - Selected and New Poems: 1995 - 2009 (Norton, 2009). Dunn lives in Frostburg, Maryland.

And so you call your best friend
who's away, just to hear his voice,
but forget his recording concludes
with "Have a nice day."

"Thank you, but I have other plans,"
you're always tempted to respond,
as an old lady once did, the clerk
in the liquor store unable to laugh.

Always tempted, what a sad
combination of words. And so
you take a walk into the neighborhood,
where the rhododendrons are out
and also some yellowy things

and the lilacs remind you of a song
by Nina Simone. "Where's my love?"
is its refrain. Up near Gravel Hill
two fidgety deer cross the road,
whitetails, exactly where

the week before a red fox
made a more confident dash.
Now and then the world rewards,
and so you make your way back

past the careful lawns, the drowsy backyards,
knowing the soul on its own
is helpless, asleep in the hollows
of its rigging, waiting to be stirred.

It was written three years ago at Yaddo, and started much as you now see it, the major difference being that it didn’t begin with “And so.”

Not many revisions, which is unusual for me. It came rather fast. Certainly I had a viable draft after a morning’s work. Maybe about two months later, with just minor tinkerings, I felt that I had it.

As I said, very little sweat and tears with this one, though I can’t say that it was inspired by anything I’m aware of. I do believe in inspiration, though more often than not inspiration comes from what I’ve found myself saying and doing than by anything that preceded the poem.

It arrived at its final form after I saw that I used “And so” twice in the body of the poem.

When I decided to then begin the poem with those words, the poem had found its structure. The recurrence of “And so” became an organizing principle.

I sent it to APR with a bunch of other poems about four months later. It appeared in print about a year after. When I was younger I used to rush the sending out of poems. Now I’m in no hurry.

All I’ll say is that nothing in this poem actually happened, though things like it have occurred at various times of my life.

In this poem, as in many of your poems, you manage to include a range of disparate material in a way that seems organic, not at all disjunctive. How did it first occur to you that a best friend, a red fox, and Nina Simone belonged in the same poem together?

It only occurred to me after the fact. As Stevens says in a poem, “things occur as they occur.”

I’d say it’s a poem of sensibility with narrative elements. It’s less interested in its “story” than it is in how its details might reveal a consciousness in the act of discovering itself.

The most astute reader that I can imagine, someone who might appreciate how a poem might be stitched together, who might perceive its moves and its orchestration.

Larry Raab was at Yaddo with me, but I don’t remember his input on this poem. I show him everything that I write, and he’s enormously helpful. My wife Barbara Hurd sees everything too. They often hasten a poem’s progress.

I don’t know, but it ain’t German.

This one, I think, felt more finished.