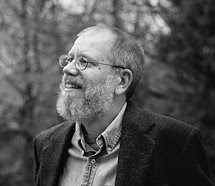 Eric Pankey's most recent collection is The Pear as One Example: New & Selected Poems 1984-2008 (Ausable Press, 2008). Born in Kansas City in 1959, Eric Pankey directed the MFA program at Washington University in St. Louis for many years. His work has been awarded numerous honors, including grants from the Ingram Merrill Foundation, The John Simon Guggenheim Memorial Foundation, and the National Endowment for the Arts. For the last decade he has taught in the MFA program at George Mason University, where he is Professor of English and the Heritage Chair in Writing. He lives in Fairfax, VA with his wife and daughter.

So that one does not think of proportion,
Abrupt edges, magnetic poles, remnants,
Or, for instance, the quality of mercy,

Or the maker. To dispense with narrative,
To let go of the ledger, the inventory,
The ten-thousand stains where blood redeemed,

Is to believe in the dream's irrational
Counter-history, the limestone scree,
The said and to-be-said held in solution,

The weight a body takes on, inch by inch,
As it's pulled from the quarry's clouded water,
A body bloated, radiant. Jade-tinged. Pearl.

I believe I started this poem in the late 1990s—1998-1999. This poem started as most of my poems start with words, images, and half lines jotted in notebooks:

Things like that and I look and see if I can find a way to start speaking, to bring these unlikely things into a whole.

I am not sure how to count revisions. Much of the language in this poem had many different shapes before it ended up in this iteration—eight or nine, at least. And then there is the fiddling—changing a word here and there, reconsidering the lines as interval of sounds, as units of meaning. I remember there were some versions in couplets, but those seemed clunky and heavy-handed.

Three or four years elapsed between the notebook entries and the poem showing up in the book Oracle Figures (Ausable, 2003).

I do not believe in inspiration.

I think that there are times when things do open up before one, as if a gift from some unknown source, but those times are usually because one has prepared oneself for writing—reading, thinking, note-taking, conversation, meditation, brooding, daydreaming, fretting.

One gets to a time and space where one has the chance to write (for me that is usually the summer months when I am not teaching) and all that preparation makes the poem that ends up getting made possible.

From the start a four or five beat line seemed the normative length of the lines. When I am writing quickly, which is often what early drafting is for me, I tend to write lines between seven and eleven syllables. The tercets felt like the right stanza almost from the start, creating a nice counterpoint between the two headlong main sentences in the poem and the cataloging habits of the lines.

When I begin almost any poem, I find myself counting something—syllables, beats, words—because I want the lines to be a space I can work within. This initial count is often adjust or abandoned as suits the poem that begins to take shape.

I do not have any rules about when to send poems out. I tend to send them out when I have finished working on them. Sometimes that is within days, sometimes many months. This poem I think waited a couple of months and saw a little tinkering here and there before I sent it out. J. D. McClatchy at the Yale Review was kind enough to give it a home and let it find its first readers.

I have written about the old brickyard quarry in several poems over the years—an old abandoned brickworks near where I grew up. The quarry had filled with water and we used it as a swimming hole. When McClatchy accepted the poem, he commented on its “abstract nature,” and it is the most hermetic poem I have written on this subject, and yet it is direct as well—the image at the end is not just a figure, but a story I remember as if it were yesterday. A teenager diving from the quarry’s sheer edge missed the water’s edge and broke his neck and the body sunk into the water and had to be retrieved. He must have been swimming there alone in the evening and it was only the following day he was discovered.

At this time I was reading Stevens, Milosz, Ondaatje, Brigit Kelly, and others. I am not sure about influences, but I do think each of these poets has a meditative habit that I hope is in evidence in this poem.

I imagine a reader who loves all the poets I love, but even more so.

Did you let anyone see drafts of this poem when it was still in process? Is there an individual or a group of individuals with whom you regularly share work?

At this time a group of poet friends read all my poems: Steve Schreiner, Allison Funk, Jeff Hamilton, Jason Sommer, and Jennifer Atkinson. An eclectic group and as a result I received great commentary from readers who might not love all the poets I love.

This is question probably best answered by someone else.

I hope it is finished, and then abandoned, given up and over to reader. The act of making the poem is the most intimate relationship I have with a poem. In re-reading this poem to answer your questions, I find myself curious about what formal, philosophical, and aesthetical concerns were haunting me back in the late 1990s. For all the assertions in the poems, I sense that much that gets said is really in the form of a question.

Posted by Brian Brodeur at 1:32 PM