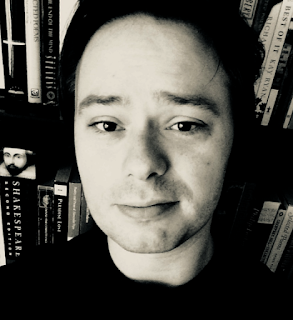 Austin Allen’s first poetry collection, Pleasures of the Game (Waywiser Press, 2016), was awarded the Anthony Hecht Poetry Prize. His poetry has appeared or is forthcoming in The Yale Review, The Missouri Review, The Sewanee Review, 32 Poems, and Verse Daily. He is a doctoral student in creative writing at the University of Cincinnati.


*Roger Maris, American baseball player, famous for breaking Babe Ruth’s single-season record of 60 home runs in 1961. Because Maris had a longer season than Ruth in which to accumulate his total, his feat generated fierce controversy, and one sportswriter suggested that an asterisk accompany his name in the record books. The commissioner of baseball agreed, but the mark was never added.


Asterisk, dark kiss, sign you were born under,
little appendix twinging in your gut,
making its clever point, its “Well yes but…”
Has someone carved it on your grave, I wonder?

It multiplies, becomes a flurry of flakes,
hardens to hail and pelts you as you run,
head lowered, one blast shy of sixty-one.
Litters its thistles, drives spikes through your spikes.

*
Babe Ruth ate the past. Which would have been
the present, back then. That huge son of a bitch
gobbled and guzzled, smoked and sinned so much,
what’s left for you? The wine is drained, the women

know the score. Father of modern sport
and giant baby, hopeless little shit
sent to reform school, where he learned to hit,
and grin, and trot around the bases toward—

*
Rip the game stitch from stitch, green blade from blade.
Spill all the ball’s yarn brains, the whole white mile
spooled to the core. You’re starting to taste bile—
retch and spit up your black tobacco cud,

spit seeds, spit bubblegum, spit it: one spiked
windpipe obstruction like a Cracker Jack toy
lodged back there, somehow, since you were a boy…
You don’t remember childhood much. You liked

baseball, liked summertime. Each place you lived
seemed colder than the last. Old tribal nations
under the fields, train platforms without stations.
Some years your parents quarreled and you moved.

your way, you can’t reach—even to start from—home—
somehow the fix is in—each word you shout
at those fat folded arms is asterisked out…
The grass mends. The crowd goes tame. The seams resume.

*
Although it comes late, you hit that final blast.
The asterisk needs an asterisk of its own.
Above your Little League diamond, diamonds shone
unqualified....The record for time past

is broken, is broken. The child defeats the father,
memorabilia gathers on the shelf,
but time had more time to surpass itself,
so I’m not buying any of it, either.

I wrote the poem in 2011 and included it in my first book, Pleasures of the Game. I’d been fascinated by the Roger Maris story since childhood and had wanted to write about him for years. The asterisk beside his name in the record books is just an urban legend, but it spoke to something real: a lingering perception that he’d fallen short of Babe Ruth, that his record technically didn’t count. He knew many fans felt this way and was shaken by the controversy.

I think most of us can relate to the fear of the asterisk, which goes something like this:


YOU HAVE ACHIEVED INCREDIBLE SUCCESS*

The poem had a number of false starts. The earliest draft I can find is from March 2011, and the first one that resembles the finished poem is from October 2011. Then came a number of edits before I sent it out to journals. Two years later, I made another substantial change before my book came out: I tweaked the narrative framing so that the poem addresses Maris as “you,” from the perspective of an unnamed “I,” rather than speaking as Maris.

I did this after a friend suggested I’d made Maris sound too poet-like. Although I was never aiming for a literal imitation of his voice, I found the critique helpful, and I think the final version is better for the change.

Sometimes a poem will come together quickly, but not often. I sweated this one out. On the other hand, glancing at these old drafts, I see I made a sudden burst of progress around 10/30/11, so inspiration (whatever it is) played a part.

One conscious choice was the use of slant or imperfect rhymes: “flakes / spikes,” etc. These seemed appropriate for a poem that’s all about “close, but not quite.” They’re also sprinkled irregularly throughout the poem—I was trying to keep myself as well as the reader off balance.

These days it’s rare for me to revise a poem drastically several times over. I plan and prepare more, so that I have a better idea of what I want to do by the time I start writing. I still work slowly, but more of that time goes into fiddling with details.

About a year. It got picked up by Iron Horse Literary Review in 2012 and became one of my first journal publications.

It varies quite a bit. Sometimes I send things out too soon. Everything about the current market encourages that impulse—you have to fight it. Better to let the poem breathe for a while.

“Maris” deals with well-known, real-life events, but still takes plenty of creative license. I was going more for psychological than biographical truth. I don’t know, for example, whether he actually resented Babe Ruth, a man he never met. But doesn’t it seem plausible?

A fractured one, yes.

I forget who I was reading at the time, but Frost, Auden, and Marianne Moore all explored connections between games and writing (including, in Moore’s case, baseball and writing). Their influence shaped Pleasures of the Game in general and might have crept into “Maris.”

I tend to agree with Auden’s couplet: “Art, if it doesn’t start there, at least ends / In an attempt to entertain our friends.”

I also write with live performance in mind. At poetry readings there are always a few audience members who’ve been roped into attending and are skeptical of poetry. I try to write poems that will win them over.

My MFA classmates saw a draft version of “Maris.” Outside of workshops, I generally show poem drafts to three or four friends. One friend has been my default first reader for about ten years now; we share and comment regularly on each other’s work. We don’t always take each other’s advice, but I never publish anything without getting her opinion first. (See Auden couplet above.)

Structurally, it’s a little odder than most of my poems. It feels unsettled to me, unstable in its mix of fact and fantasy, and I hope it feels that way to the reader, too.

Besides the baseball stuff? The neurotic attitude toward success.