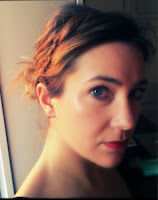 Dora Malech is the author of two books of poems, Say So and Shore Ordered Ocean. Her poems have appeared in The New Yorker, Poetry, American Letters& Commentary, Poetry London, and Best New Poets, among other publications. She has served as a Distinguished Poet-in-Residence at Saint Mary’s College of California, in addition to teaching at the University of Iowa Writers’ Workshop, Victoria University’s International Institute of Modern Letters in New Zealand, and elsewhere. She is the recipient of fellowships and awards that include a Ruth Lilly Poetry Fellowship, a Writers’ Fellowship at the Civitella Ranieri Center in Italy, and a Walter E. Dakin Fellowship from the Sewanee Writers’ Conference.  In addition to writing and teaching, she makes visual art and directs the Iowa Youth Writing Project, a language arts outreach organization.

My mother does not trust
women without it.
What are they not hiding?
Renders the dead living

and the living more alive.
Everything I say sets
the clouds off blubbering
like they knew the pretty dead.

The skin, a silly one-act, concurs.
At the carnival, each child's cheek becomes
a rainbow. God, grant me a brighter myself.
Each breath, a game called Live Forever.

I am small. Don't ask me to reconcile
one shadow with another. I admit—
paint the dead pink, it does not make
them sunrise. Paint the living blue,

it does not make them sky, or sea,
a berry, clapboard house, or dead.
God, leave us our costumes,
don't blow in our noses,

strip us to the underside of skin.
Even the earth claims color
once a year, dressed in red leaves
as the trees play Grieving.

I wrote “Makeup” in Fall 2003. I went back to the notebook in which I was writing at that time, and the poem keeps company with other lines and drafts of poems that grapple with similar materials (mortality, a shifting season, artifice, expectations, family).

I’m glad I went back and looked at my notebook to verify my response to this question, since I completely misremembered. Most of my poems (especially at that time) are the result of a magpie’s process of collecting shiny bits of language and observation. I go back through my notebook and begin the process of revision by piecing together these fragments, puzzling them into form. That was how I misremembered “Makeup” happening, but in fact, I basically wrote the first draft of the poem from beginning to end. It was definitely a rough draft, but its motion was there in its entirety. I think it must have been a month or so before that first draft went through a few more drafts to reach an almost-final draft, and I always keep worrying at individual word choices and so forth long after that.

I do believe in inspiration, but not in the sense of the poem as a “gift” from elsewhere (though I won’t rule anything out; I just don’t want to flatter myself that whatever or whoever’s “elsewhere” would give me the time of day). I suppose I think of inspiration as an incredibly active kind of attention, a radical receptivity. So while certain poems, like “Makeup,” come to me in a rough form but whole, I think they still require revision and work to live up to whatever “inspiration” or impulse occasioned their beginnings. I also think that “Makeup” in particular was a poem that I had been “working” on in my mind for pretty much my whole life, in the sense that its concerns came directly from my life. While we think of the “first draft” as the first words written on the page, a poem often starts gestating in the life and the mind and the body long before a word makes it to the paper.

I don’t know how consciously I was making formal decisions, but I was definitely concerned with questions of form in general at that point in my writing life, and I’m sure that those concerns shaped the poem. Actually, I was just about to transition into writing much more “formal” poems (in the sense of “received” form or “traditional” prosody) a few months later, and I feel like I was already starting to explore in that direction. In my notebook, I have some notes a few pages before “Makeup” about stichic poetry versus strophic poetry, and I think the move to a stanzaic form in revision was something that was important to the intentions of the poem, in terms of exploring art and artifice, and employing rhetorical moves to build an argument of sorts.

Four years. The poem first appeared in the May 2007 issue of Poetry.

It varies. I often wait for poems to have company before I send them off into the world. I don’t necessarily need to write three or four more poems “like” each other, but I kind of like to send poems out together that, if by some stroke of luck, got published alongside each other, would resonate in some way. So one poem might sit for a year or two waiting for kindred poems, but I don’t have any strict rules, just practicality and instinct in this regard.

I see this poem as fact. I mean, there’s personification, metaphor, and so forth, but I don’t know what to say besides that there are the way in which I tell the truth.

Well, if this poem is “fact,” as I just claimed, I’m talking to God about cosmetics. So there’s that.
Really though, an ideal reader for me would be anyone open to the possibility of pleasure in language and attention and uncertainty.

It’s less “dense” in terms of language and imagery than some of my other poems. It risks certain sentimentalities (writing about my mother; talking to God) that I should probably risk more often.

The questions of artifice, presentation, and cultural expectations feel American to me. Also, I think Americans (and yes, this is an overgeneralization), are squeamish about accepting death and decay as part of a life cycle. We hide death away like it’s shameful. We pretty it up if we have to look at it at all.  Of course, there’s a loss and an estrangement there. That said, I don’t think poetry’s strong suit is getting up on a soapbox and espousing a firm opinion like “artifice is bad.” I write poetry to complicate my point of view, or dignify the world’s inherent complications. This poem entertains the possibility of a kind of redemptive artifice. (I mean, I think perhaps poetry’s a kind of redemptive artifice?) I’ve had people read this poem or hear me read it and tell me stories about a loved one who insisted on red lipstick on her deathbed; there’s often an eye roll or a smile that accompanies the story, but there’s something there that’s worth noticing. Now that I think of it, those stories haven’t all been from Americans, so perhaps it’s generational? Or simply human? “American” is as complicated as “artifice,” or anything else worth thinking about, I suppose.