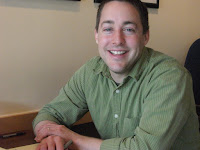 Andrew Mulvania is the author of one book of poems, Also In Arcadia, published by The Backwaters Press in Omaha, Nebraska, in 2008. Recent poems and reviews have appeared in the Southwest Review, Hudson Review, and The Missouri Review. He was the recipient of a 2008 Individual Creative Artists Fellowship in Poetry from the Pennsylvania Council on the Arts, and was a poet-in-residence at the Chautauqua Writers' Center in the summer of 2011. "Robert Frost, The Derry Farm, New Hampshire, 1906," appears in the anthology A Face to Meet the Faces: An Anthology of Contemporary Persona Poetry just published this year by The University of Akron Press. He teaches at Washington & Jefferson College in Washington, Pennsylvania, where he is Associate Professor of English.

“I am sure that anyone standing in my place tonight, charged with the happy office of greeting Mr. Frost on his birthday, on his massive, his Sophoclean birthday, would be bound to feel, as I do indeed feel, a considerable measure of diffidence.”--Lionel Trilling, March 26th, 1959, Waldorf-Astoria, in celebration of Robert Frost’s eighty-fifth birthday.

He sat reflecting in his cane back chair
on the bitter wisdom of old Sophocles
in the Oedipus at Colonus: Never to have been born
is best, / But if we must see the light,
the next best is quickly returning whence we came.
That would surely have been true for poor Elliot
and he had—hadn’t he?—taken the poet’s advice,
returning from the arms of Frost and Elinor
to wherever “whence we came” from was—if anywhere.
The other children—the four left—were at play
out in the pasture down by Hyla Brook.
He’d written about that once in a little poem
he’d called “The Trial By Existence”—the thought that all of us
come “trailing clouds of glory,” as Wordsworth had it,
from some prior life of which we have no memory
and that whatever pain or joy befalls us
is ours by rights as what we somehow chose.
But had the children chosen this country life
of isolation?—for lately he’d noticed they’d grown strange
from having only one another for playfellows.
It was fine for him, misanthrope that he was,
but the strain had been too much for Elinor
and, after Elliot died, something within her
died with him and a wall went up between them.
It couldn’t be true that Elliot had chosen to die,
to be ensouled for only four short years
and then go back. No, Sophocles was right—
this whole business of living was for the birds,
those goddamn chickens squawking to be fed
even now in the chicken coops behind the house.
Still, there were days like this one: children at play
in the near pasture, April sun warming the fields
and the back of his neck where he sat in the chair.
Yes, maybe it wasn’t so terrible after all.
White wings burst briefly upward in the air.

I wrote "Robert Frost, The Derry Farm, New Hampshire, 1906" over a series of days and weeks in the summer of 2009, starting with a draft and then re-writing it over again from the beginning, picking up things along the way that I'd left out and letting go of some things I should have left out in the first place (my typical process). Though I suppose I really began "writing" the poem several months earlier while reading Brian Hall's wonderful novel of Frost's life, The Fall of Frost, which juxtaposes scenes from different periods in Frost's life, much as does the epigraph and text of my poem. Hall's novel suggested much of the tone and imagery of my poem--I must have gotten the voice of Frost in my head while reading that novel and couldn't get it out. I guess I was interested in exploring Lionel Trilling's controversial statement--made at the poet's 85th birthday celebration--that Frost was a "terrifying" and "Sophoclean" (or tragic) poet in the context of some of the losses in Frost's life (of which there would be many), in particular the death of his first son, Elliott, in 1900, when the boy was not quite four years old. At the time, my own son was just two years old--perfectly healthy, as he continues to be, thank God--and my own anxieties as a new-ish father had on occasion taken the shape of worrying about what I would possibly do if something ever happened to him. In addition, I was also interested in just what it had meant for Frost to have lived with his young family on the Derry, New Hampshire, farm in those years from 1900-1911 when he was writing many of the poems for which we now remember and, quite rightly, celebrate him. I grew up on an 80-acre farm in central Missouri to which my father had moved his own young family from the St. Louis suburbs in the early 1970's (I came along after my parents had moved out to the country, in 1974), and I suppose I was thinking about what it means for a father to choose that fairly isolated, rural life for his family. All of these things were swirling around in my head when the first line of the poem came to me, along with the idea to have Frost thinking about the passage from Sophocles' Oedipus play. Was I myself feeling particularly self-pitying and tragic that summer, ridiculously comparing my own trivial problems to those of Oedipus or--for that matter--Frost, meditating on the value of life when weighing the suffering of existence against the possibility of non-being, and somehow using the voice of Frost to articulate those anxieties? Perhaps. But this answer is already getting far too long.

Probably around 5-6 drafts, over a couple of weeks.

I do believe in inspiration, but, as my first answer would suggest, I think it requires preparing yourself to receive it and working yourself up into the proper state to be able to write the poem (for the best description of that state of mind--once the writing begins--I've ever read, I highly recommend section 6 of A.R. Ammons's long poem Garbage, too long to quote here). I think it's a mysterious process that ultimately leads from whatever experience "inspired" a poem to when you actually sit down to write that poem and what form it will take. I mean, not to sound too self-aggrandizing or to elevate this one poem to any more importance than it actually has, but didn't I have to have been born on a farm in the 1970's, have a life-long love and admiration for the work of Robert Frost, happen across a review of Brian Hall's The Fall of Frost, buy a copy of the book and read it, in order to write the poem? In a way, I guess that's "sweat," but really, for a poet, it's just living your life.

I knew the poem would be a kind of interior monologue in what a critic like James Wood would call "free indirect style"--using the third person but still capturing the sense of Frost's own speaking (or thinking) voice. I also use a not-terribly-strict blank verse, which is a traditional line for the dramatic monologue form going back to Browning, Tennyson, and others. That line, as well as the long, single stanza, seemed to make sense for this poem.

I sent the poem off in the fall of 2009, and Willard Spiegelman and the good people who work at the Southwest Review accepted it for publication in February 2010. It appeared in print in the first issue of Southwest Review for 2011.

I tend to let poems sit for a long time, probably longer than most people, maybe waiting for them to really feel "done," or maybe just being lazy. To quote Charles Simic quoting William Dean Howells, "For a lazy man I'm extremely industrious." I should probably send stuff out more and sooner than I do, though I'm sure the world would continue to go around just fine whether or not I sent out my little poetic missives more swiftly or with greater frequency.

I think the poem draws heavily on the facts of Frost's life while still allowing itself enough license to invent or embellish on those facts to suit the dramatic situation of the poem.

Yes, in the sense that it tells a story that focuses on a specific moment in time and has a beginning, middle, and end, and comes to some sort of climax or "crisis moment."

Pretty much disclosed 'em all up top, didn't I?--I'm sure more than anyone wanted to know.

Myself first, then anyone who would be interested in reading the poem. The hope that my parents wouldn't be too embarrassed or disown me or anything is, I'm sure, always mixed in there somewhere.

I let the excellent poet, Steve Gehrke--il miglior fabbro--see drafts of this poem in the summer of 2009, and he is the individual with whom I regularly share work. Or perhaps I should say he is the individual who regularly suffers or tolerates the flurry of drafts with which I, in my insecurity, inundate him with all-too-great regularity, and who, in return, graciously allows me to read some of his own fine work from time to time.

I have a number of poems in my new manuscript in the voice of--or in dialogue with--various poets and writers at difficult moments in their lives, personally and artistically, so I suppose it's not that different from those poems, though it is different from the more traditional lyric and pastoral poems in my first book, Also In Arcadia (though one could argue for pastoral elements in this poem about Frost as well).

Certainly, the subject of the poem--Robert Frost--is about as American as they come, both as one of our most well-known and best-loved poets and as someone who, himself, meditated on the nature of "American-ness" in many of his poems. I'd say the landscape in this poem is also American.

It was finished, but, judging by how much I've rambled on about it here, I still clearly have not completely let it go.

Posted by Brian Brodeur at 3:36 PM