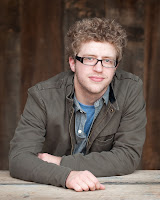 Dave Lucas was born in Cleveland, Ohio, and is the author of Weather (VQR, 2011). He is the recipient of a Henry Hoyns Fellowship from the University of Virginia and a "Discovery"/The Nation Prize, and his poems have appeared in many journals including The Paris Review, Poetry, and Slate. He lives in Cleveland and Ann Arbor, where he is a PhD candidate in English language and literature at the University of Michigan.

Twilight folds over houses on our street;
its hazy gold is gilding our front lawns,
delineating asphalt and concrete
driveways with shadows. Evening is coming on,
quietly, like a second drink, the beers
men hold while rising from their plastic chairs
to stand above their sprinklers, and approve.

Soon the fireflies will rise in lucent droves—
for now, however, everything seems content
to settle into archetypal grooves:
the toddler’s portraits chalked out on cement,
mothers in windows, finishing the dishes.
Chuck Connelly’s cigarette has burned to ashes;
he talks politics to Roger in the drive.

"It’s all someone can do just to survive,"
he says, and nods—both nod—and pops another
beer from the cooler. "No rain. Would you believe—"
says Chuck, checking the paper for the weather.
At least a man can keep his yard in shape.
Somewhere beyond this plotted cityscape
their sons drive back and forth in borrowed cars:

how small their city seems now, and how far
away they feel from last year, when they rode
their bikes to other neighborhoods, to score
a smoke or cop a feel in some girl’s bed.
They tune the radio to this summer’s song
and cruise into the yet-to-exhale lung
of August night. Nothing to do but this.

These are the times they’d never dream they’ll miss—
the hour spent chasing a party long burned out,
graphic imagined intercourse with Denise.
This is all they can even think about,
and thankfully, since what good would it do
to choke on madeleines of temps perdu
when so much time is set aside for that?

Not that their fathers weaken with regret
as nighttime settles in—no, their wives
are on the phone, the cooler has Labatt
to spare; at ten the Giants play the Braves.
There may be something to romanticize
about their own first cars, the truths and lies
they told their friends about some summer fling,

but what good is it now, when anything
recalled is two parts true and one part false?
When no one can remember just who sang
that song that everybody loved? What else?
It doesn’t come to mind. The sprinkler spits
in metronome; they’re out of cigarettes.
Roger folds up his chair, calls it a day.

The stars come out in cosmic disarray,
and windows flash with television blues.
The husbands come to bed, nothing to say
but ’night. Two hours late—with some excuse—
their sons come home, too full of songs and girls
to notice dew perfect its muted pearls
or countless crickets singing for a mate.

This is one of the earliest poems to survive for my first book. I wrote it as a graduate student at the University of Virginia, in the fall of 2003, when I was twenty-three. The poem started with an image of a yard sprinkler ticking "like summer’s metronome," an image that did not survive for the final draft but which certainly provided a main theme for the eventual poem.

I wrote the poem over the course of a month or so, and since I tend to revise as I go, I don’t remember how many revisions I went through. I do remember spending too much time staring at the half-written poem in a notebook, wondering what was coming next. I spent as much time waiting as I did revising.

Writers’ processes are mysterious, I think, even to the most self-aware among them. When I couldn’t find the right line, I felt utterly present—sweaty and teary—in the poem’s composition. When the right line came, I felt like I had had nothing to do with it. Maybe science will one day demonstrate exactly where in the brain inspiration happens, what electromagnetic or biochemical stimulation activates the muse. But then, I take science on faith too.

As far as I know, it’s a nonce form, and one that grew out of necessity. I wrote myself into a "Venus and Adonis" stanza and then sensed that something else needed to happen. The last unrhymed line of each stanza became a strategy of variation but also a logic of transition from one stanza to the next. By the time I reached the end of the poem, it seemed right to close with an apparently unrhymed line that still recalls its opening rhymes.

It depends on the poem. My satisfaction with a poem depreciates like a new car driven off the lot, and this only increases once a poem is accepted for publication somewhere. Horace says to put a poem away for nine years before publishing it. I admire his patience.

I don’t necessarily see fact and fiction as two opposites through which one needs to steer a steady course. At their etymological roots, both words refer to something made, and of course the root of poetry does too, so I’m content with that. At the risk of being obtuse, however, I will say that the poem attempts to breathe some life back into the clichés of suburbia—events that one imagines or remembers happening even if they are not happening currently—and that I’m pounding on those clichés in the hope that they’ll start breathing on their own again.

I don’t know. Categories such as "narrative"—or its workshop antithesis, "lyric"—have never held much water for me. Any poem that’s ever moved me enough to read it more than once demonstrates elements of both narrative and lyricism. So yes, it’s a narrative poem, but it’s also a lyric poem that wants to be an epic.

I was reading The Poems of W. B. Yeats and experiencing one of the great revelations of my reading life. I don’t know that the poem betrays that influence, given its subject matter, but reading Yeats certainly stoked some ambition in the younger writer I was. I was also attracted to the rather mystical portrayal of suburbia in Mark Strand’s "The Continuous Life."

In my grandest delusions, readers skeptical of poetry find themselves converted, and the living and dead poets and friends I love nod in approval.

My then-girlfriend had to put up with so many announcements of new lines and laments for the abandonment of others that I am both grateful and mystified she ever agreed to marry me. She remains the first, last and best reader of my poems.

When I eventually shared the poem in Charles Wright’s workshop, I remember it being well received and thoughtfully, helpfully critiqued—Charles was particularly kind to it, which was a great encouragement—but it was not met with the full Roman triumph I had been expecting.

At the time I wrote the poem it was quite similar indeed to other poems of mine. In the eight years since, though, I’ve moved away from this poetry of the suburbs and toward a vatic, incantatory voice more applicable to the sort of industrial mythmaking that occupies me now. I’m sure this shift in my thinking parallels a literal move from the suburbs to the city of Cleveland as well.

This is tricky. The poem attempts, as I mention above, to animate some of the clichés of American suburbia, of teenagers in suburbia, and in particular of male teenagers in suburbia. But too often those clichés are labeled "American" to the exclusion of other American experiences. The word "American" means too many things to too many people—and it should—for me to feel justified in claiming it for this poem.

I do think (or hope) that the poem exhibits a spirit of both expansiveness and lonesomeness, which I have found to be true of my experience of the American landscape, and the suburbs are no exception.

Finished, then abandoned.
Posted by Brian Brodeur at 5:08 PM