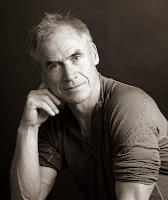 Mark Turpin's first full-length collection, Hammer, published by Sarabande Books, won the Ploughshares' Zacharis First Book Award in 2004. In 1997 he received a Whiting award. His poems have appeared in the The Paris Review, The Threepenny Review, and Slate among others; they have been read on the PBS News Hour (for Labor Day) and by Garrison Keillor for The Writer's Almanac. His work appears in many anthologies, and is also embedded in a Berkeley sidewalk as part of the Addison Street Anthology, selected by Bob Hass. He is the son of a Presbyterian minister. He received a Masters in Poetry from Boston University at age forty seven, otherwise, he has spent thirty years working construction and building houses. He lives and works in Berkeley, California.


THE MAN WHO BUILT THIS HOUSE

First realize he didn’t build it for himself,
and that changes a man, and the way he thinks
about building a house. There is joy but
it’s a colder type—he’d as easily joy in
tearing it down, as we have done, down
to the bare frame, loaded boxes of lath
and plaster, stirring a dust unstirred since
well, we know the date: Thursday, June 19, 1930.
Date on the newspaper stuffed between
the doorbell battery and the box it lodged in.
Not so long ago, seventy years, historical
only to a Californian. The headline: "Admiral Byrd
Given Welcome In N.Y." "Rear Admiral
Richard E. Byrd, conqueror of the South Pole."
Safe to say, the man who built this house
is gone or nearly gone by now-and we think
of the houses we have built, and the strangers
who will certainly, eventually come to change
or tear them down—that further event that
needs to happen. And there is a foulness
to this dust, dust locked in walls till
we arrived to release it to the world again.
So, maybe, all is as it should be. Still, the man
himself haunts me. I noticed it—especially
after my apprentice saw fit to criticize his work,
this neat but spindly frame of rough 2x4’s—
2x4’s for the walls, the rafters, even for the ceiling joists
(that he tied to the ridge to keep the ceiling from sagging)
that functioned adequately all these years
till we knocked it loose. And so, for reasons
my apprentice wouldn’t understand, I admit
a liking, yes, for him and for this sketch
of a house, the lightness of his eye, as if
there might be something else to think about:
a sister taken sick, or maybe just a book or
a newspaper with a coffee and a smoke, as if
to say to the world: This is all you take from me.
Of course, having lived here a month already,
I know better—accustomed now to the
hieroglyphs of his keel marks, his red crayon
with an arrow denoting the sole plate of a wall,
imaginary, invisible lines that he
unknowing, passes on to me, numbers and lines
radiating from the corners and the eaves
—where the bird nests hide inside the vents—
all lining up, falling plumb, coming square and true
for me, and all his offhand easiness just a guise
for a mind too quick ever to be satisfied
—just moving quickly through the motions.
And, now, what he has to show for it, hauled away
in boxes and bags, and me about to alter
what's left—not like Byrd’s Pole, fixed
forever. The pure radiating lines forever
flowing and unalterable—lines of mind only,
without a house attached. And yet, even a South Pole
doesn’t seem much of an accomplishment to us—
to have merely found another place on Earth.
There is a special pity that we reserve
for the dead, trapped in their newspapers’
images of time, wearing what they wore,
doing what they did. I feel as much for this man here,
and for the force it took to pull a chalked string
off the floor, let it snap, and, make a wall.
Something apart from something else,
not forever but for a little while.
He must have felt it too, a man like him,
else why leave the newspaper for us?

It was one of the last poems to go into Hammer, published in 2003. Around that time, my work required me to demolish a very small, flimsy house. There was an offhand sketchiness to the workmanship as if the builder might have been a very good carpenter but very casual about this particular project. Anyway, he built the house, he was dead, and here I was, many years later, alive, tearing it down.

It was fast for me, about two months. Average is six months, one poem at a time, and hundreds, even thousands of changes, most small, some large. I print things out often, and it’s not uncommon for me to have a couple of reams of paper in a poem folder.

I expect sweat and tears, yes. False starts, yes. Changing horses midstream, yes. I expect the triumphant deletion of passages painstakingly erected over months like a card houses in wind tunnels, yes. I expect the regretted bad language in response to the opinions of those nearest and dearest to my heart. Recantings. Reversals. Yes, yes, yes.

I can’t write without some sense of mission, imagined or not. I never sit down just to see what happens under my pen. If I only have a subject, I prepare for a long struggle, although the moment my mind catches on something: a hook, a title, a rhythm, inspiration can begin to trickle. With a couple of solid stanzas, I’ll hang on for years.

The only question I have while writing is: does this sound right? If time goes by and it still doesn’t sound right, then I resort to conscious technique. My famous mentor was known for saying, "Consciousness is not a bad thing." And I want to believe it.

Although I understand its important function, I don’t often send poems into the world.

Would "Ode to a Nightingale" be a better poem if Keats had invented his encounter with the nightingale?

I think it would be called a meditative-descriptive poem--but with narrative elements like 99% of the poems anyone reads more than once.

I like the idea of a general audience. For reasons obscured by history, Shakespeare didn’t sneer at this audience.

The fewer opinions and more time I have, the easier it is to know what I think myself.

I once got drunk with Phil Levine.

Poems I abandon are most often not very good.