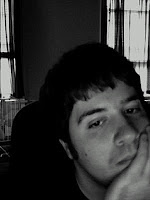 Keith Montesano’s first book, Ghost Lights, was published in May 2010 by Dream Horse Press. Other poems have appeared or are forthcoming in Hayden’s Ferry Review, American Literary Review, Third Coast, River Styx, Crab Orchard Review, Ninth Letter, and elsewhere. He currently lives with his wife in New York, where he is a PhD Candidate in English and Creative Writing at Binghamton University. For more information, please visit Keith's blog.

What about the part where the story ends? It ends
with our bodies like machines. Charred like paper—

singed like leaves. Arms reaching out: Come. Now.
Who says the hands of the dead don’t ask us

to go there with them? Isn’t that so sad? The family
parked, crushed by falling rocks. They all burned to death.

I saw it in the papers today. I couldn’t find
a word then. I looked. I’m looking at you now. Yes,

I said, and why are you telling me this? Maybe as I drive
with you I’m remembering her voice: swamp gas

by no swamp, Piezoelectricity. I didn’t believe
that sort of thing existed, you say. Ball lightning. Mirages.

St. Elmo on Boeing wings. Time-lapsed sheets
roaring from our closets. And before our exit: frail bodies

in their otherworldly paths. Bones dusted years from now—
leaving only their voices: We’ve shown you everything.

I think it was sometime during the summer of 2007.

It started from a passage in a Dan Chaon story from his collection, Among the Missing. I don’t know the story’s title, but the narrator was talking about the phenomenon of ghost lights. For some reason it struck me to the point of remembering the family that an ex-girlfriend had told me about years ago: how they were parked by the side of the road somewhere, near a steep hill prone to falling rocks.

I know it would be fashionable to say that the poem went through a seemingly endless process of revision, but I would say at most it was revised about three or four times. I was actually reading Among the Missing with a group of friends that summer when I wrote the first draft, so they were the first to see it. If I remember correctly, the first draft was in choppy, short-lined tercets. After some feedback, for reasons I don’t remember, it went into longer couplets.

And I have to mention my friend Nicholas Reading here, since he’s one of the best readers of my work, and has been since I first met him my during my first year of graduate school in 2004. I remember showing him the revised version that was in couplets, and he has an uncanny knack of saying dead-on things like, “Well, I’d go ahead and move the last two stanzas to the front and take out the last stanza,” and the poem ends up becoming that which I’d hoped from the beginning. Of course it’s always something different, on a poem-to-poem basis, but it usually ends up being easy for him to diagnose the problem or problems (if the draft is a decent one, that is). I still don’t understand how he does it.

I’d say, then, that the time it took from the first to the final draft was about two to three months.

I think I have to believe in inspiration. I always feel like a poem has to kick around in my head for a while before I finally sit down and a draft comes out. Usually the “sweat and tears” happens in my head, if you will. If I have an idea that’s good enough for a poem, it makes itself known, stays for a few weeks, eats everything in my refrigerator. Like all guests who overstay their welcome, eventually you need to suck it up and kick them out.

In the case of “Ghost Lights,” I was lucky and the poetic lightning struck right away, so I stopped reading the Chaon story after that passage and composed the first draft of the poem immediately.

As I mentioned before, I knew in my gut that the short-lined tercets weren’t going to be the final form for the poem, but I wanted to get some feedback before I changed it. From the feedback I received, no one explicitly told me to lengthen the lines into couplets, but I tried for whatever reason, and after a lot of tinkering, I began to see how much I liked the shape and feel of everything. So mostly it was trial and error until the suggestions from Nick really got the poem where it needed to be.
How long after you finished this poem did it first appear in print?

The poem was first published in the fall 2008 issue of Third Coast, which probably means it was a year and a couple months total from draft to publication.

I don’t really have any rules about this. I’ve sent poems out a few days after finishing them, and they’ve ended up getting published. I’ve also worked on poems for months on end, and more often than not, they’re never published. So they end up getting re-worked, thrown away, or mined for maybe a line or two that can be used in another future poem.

I do hope that all the time I spend writing will translate into poems that people will eventually read and enjoy, but when I feel that a poem’s finished, I send it off into the world. More often that not, I would imagine, I shouldn’t, but I know too many writers out there who hold onto their poems like they’re going to be ancient relics discovered and studied for centuries. They won’t be. Eventually, you have to let them go. Write something new, for crying out loud.

Mostly the fictional elements come from the phenomenon of ghost lights, which I find fascinating—what we see that is or isn’t real, and what our cognitive senses and creative sensibilities tell us about that. The main factual element is something I mentioned previously: the headline heard about the family. I guess that’s where poetry comes into play: the balance of factual information with the rush and immediacy of language forming into some microcosmic green flash of world.

I think the poem does tell a story, but I wouldn’t categorize it as a narrative poem. That said, I couldn’t give a straight answer if someone asked, “What kind of poem is this?”

I mentioned the Dan Chaon story before, and I do use a lot of italics to represent others’ speech or thoughts in many of the poems in Ghost Lights. I’m not sure where exactly where that influence comes from, though if I were forced to say something it would be my love of movies—the balance between the visuals and the dialogue of scenes done right can become fascinatingly “whole,” if you will, and I guess I end up trying to blend those two elements to the same effect in my poems.

I honestly don’t. Hopefully the audience that doesn’t hate my poems.

Most drafts that have been written in the past ten months or so, (and there haven’t been many) since my wife and I moved to New York, have been sent to my friend Gary McDowell for the first look. Like Nick, Gary’s also a good friend and great reader of my poems.

Lately, though, I’m in the process of finishing a second manuscript, and I’ve had the pleasure of trading this with maybe five or six other poets who also have second (or, in some cases, first) manuscripts. This has been extremely valuable to me, since many of the poets are of an entirely different aesthetic; instead of looking at single poems, working with others’ collections has helped me realize how many strategies are out there in putting a collection together. It’s not an easy thing, but the more collections you read with care, the more you start to realize the faults and strengths of your own.

This is a hard one to answer. Compared to the rest of the poems in Ghost Lights, I think I made the right decision to have it be the last poem in the book—I think it touches on many themes the other poems are dealing with. However, I’d say that Ghost Lights is mostly a book of narrative poems, and even though, as previously mentioned, “Ghost Lights” is “telling a story,” it’s less explicit than many others in the book.
What is American about this poem?

I don’t know if anything is, actually. Anything and everything in the poem seems like it could happen anywhere in the world.

I hold onto the idea that almost all art, in most cases, has to eventually be abandoned. Because you consider a poem “finished” doesn’t necessarily mean everyone who reads it is not going to deem it as a draft. At some point you have to move on.
Posted by Brian Brodeur at 1:10 PM