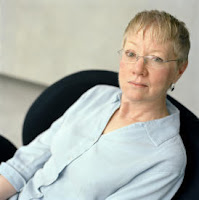 Linda Gregerson has published four collections of poetry: Fire in the Conservatory (Dragon Gate 1982), The Woman Who Died in Her Sleep (Houghton Mifflin 1996), Waterborne (Houghton Mifflin 2002), and Magnetic North (Houghton Mifflin 2007). Her many honors include awards from the American Academy of Arts and Letters, the Poetry Society of America, the Modern Poetry Association, and the Kingsley Tufts endowment, and grants and fellowships from the Guggenheim Foundation, the Institute for Advanced Study, the National Humanities Center, the National Endowment for the Arts, the Rockefeller Foundation, and the Mellon Foundation. Magnetic North was a finalist for the National Book Award. Gregerson is also the author of two volumes of criticism: The Reformation of the Subject: Spenser, Milton, and the English Protestant Epic (Cambridge University Press 1995), and Negative Capability: Contemporary American Poetry (University of Michigan Press 2001). Her essays on lyric poetry and Renaissance literature appear in many journals and anthologies. She is currently the Caroline Walker Bynum Distinguished University Professor of English Language and Literature at the University of Michigan, where she teaches creative writing and Renaissance literature.

Linda,
said my mother when the buildings fell,

before, you understand, we knew a thing
about the reasons or the ways

and means,
while we were still dumbfounded, still

bereft of likely narratives, We cannot
continue to live in a world where we

have so much
and other people have so little.

Sweet, he said.
Your mother’s wrong but sweet, the world

has never self-corrected,
you Americans break my heart.

much daylight – has found
a way to maneuver on top of the snow.

Thin crust. Sometimes her foot breaks through.
The edge

of the woods for safety or
for safety’s hopeful lookalike. Di-

delphus, “double-wombed,” which is
to say, our one marsupial:

the shelter then
the early birth, then shelter perforce again.

Virginiana for the place. The place
for a queen

supposed to have her maidenhead.
He was clever.

He had moved among the powerful.
Our possum – possessed

of thirteen teats, or so
my book informs me, quite a ready-made

republic – guides
her blind and all-but-embryonic

young to their pouch
by licking a path from the birth canal.

Resourceful, no? Requiring
commendable limberness, as does

the part I’ve seen, the part
where she ferries the juveniles on her back.

Another pair of eyes above
her shoulder. Sweet. The place

And many lost. As when
their numbers exceed the sources of milk

or when the weaker ones fall
by the wayside. There are

principles at work, no doubt:
beholding a world of harm, the mind

will apprehend some bringer-of-harm,
some cause, or course,

that might have been otherwise, had we possessed
the wit to see.

Or ruthlessness. Or what? Or heart.
My mother’s mistake, if that’s

the best the world-as-we’ve-made-it
can make of her, hasn’t

much altered with better advice. It’s
wholly premise, rather like the crusted snow.

It was written, I believe, in 2002, and began with a conversation over dinner. One of my colleagues was hosting a distinguished editor from the UK and invited me to join them for the evening. The talk turned, as talk invariably did back then, to the events of September 11, 2001. I took some liberty with the Englishman’s actual words.

I revise infinitely, as the poem unfolds. The first sentence here, which is to say, the first ten lines, endured some twenty or thirty false starts and at least that many revisions before I moved on to the next sentence. A good morning’s work for me might easily be a series of adjustments to the line breaks, leaving me at the end more or less where I began, but confident that the line breaks are right or, if not right, then the best I can do. And after sentence #2, I followed scores of false leads before our local possum appeared on the scene to rescue me. The poem had been percolating for some time before I began it. The period of active writing, which for me always includes felicitous disruptions for eating, sleeping, teaching, and other forms of busyness, was probably a week or two.

“Inspiration” isn’t part of my natural vocabulary. I’m wary of anything that seems to mystify the writing process and tend to prefer the most matter-of-fact accounts of the writer’s work. That said, no exercise of will alone has ever produced a poem worth reading. The most difficult part of writing, I think, is contriving a way to be open to surprise. Not surprise in general, of course: that’s merely another kind of sameness. But the right surprise: the realignment of attention or the rip in consciousness that will advance the argument or the meditation. In the present poem, having set forth the two contesting voices, that of the mother and that of “him,” I found that the next thirty things I thought to say were either belaboring the obvious or moralizing or, worst of all, both. Hence the possum. A real animal living in the real woods behind my house – that part was important. It was only later that she came to be a sort of humble flag-bearer for a country struggling with an unfamiliar version of itself.

That first sentence was the formal key. Every poem begins for me with the double discovery of syntax and lineation. They fight it out together and finally propose a negotiated settlement. Finding the stanza form was part and parcel of building the sentence.

Some inspire confidence pretty quickly after completion. Others, the majority, have to sit quite some time; I have to go away from them and come back a stranger.

Certainly it is important to the poem that readers recognize the historical reference in “when the buildings fell.” So its foundation is in fact. It’s also important that three different speakers exist in the poem: the mother, a second interlocutor who is not American, and the speaking persona. The important thing about the mother is that she is identified as someone close to the speaking persona, someone the persona would be expected to care about if not necessarily to agree with. In the present case, the words are the actual words of my actual mother.

I sometimes take liberties with details of attribution or reported speech, of course, as with other elements (sequencing, geographical place, etc.) that signal a basis in “fact”; I think all writers do. But, for me, there’s also a very important component that constrains invention: I think of it as the good-faith contract of expectation. If I introduce persons or circumstances in a poem that are meant to signal the speaker’s emotional or intellectual investment—if I say “my mother believes this,” or “my sister was harmed when she was a child,” or drop a hint to indicate I’ve had some direct experience of the pediatric neurology clinic that appears in my poem—I take it as a point of conscience to be telling the truth. One is making a particular claim on the reader’s attention in these instances; one is signaling that the stakes are personal, and high.

It sketches the outlines of story: the mother speaking, the “he” speaking, the European settlers in America naming a state which in turn becomes the name of an indigenous animal. But no, I would not call it a narrative poem. It does its primary thinking by other means: by juxtaposing images, speech patterns, points of view.

I’m afraid I have no idea. I expect I was reading, as I always do, a mix of contemporary poetry, newspapers, student essays, and Renaissance literature. Some readers will recognize a touch of Midsummer Night’s Dream, much transposed of course, in the “bringer-of-harm” line. I’m never not thinking about that play.

I hope, as we all do, to earn the attention of a reader who cares about the world first and writing second. Deeply, but second.

My husband is my first reader for everything.

Well, it includes my name for one thing. Which reminds me of something I had been reading shortly before I began the poem. In a very beautiful lyric called “At the Bay,” Sharon Olds describes the double leap of a dolphin, first from west to east and then from east to west. Her persona imagines that second leap as a second chance to pay attention, as though the earth were speaking to her, forgiving her (and, by implication, the rest of us) for a chronic lapse: “I will say it twice, Sharon.” Olds is not the first poet to use her name in a poem, of course, but I found this moment especially luminous. So I simply stole that bit, the direct address on the part of a benevolent, superior entity. The moment is explicit tribute to my mother and her goodness of soul and secret tribute to that earlier, lovely poem.

Everything. Its subject matter. Its preference for inductive form. Its willingness to commute between different pitches of diction and multiple points of view. Its ambivalence about worldliness.

Finished, I’d say. Which isn’t the same as “finished off,” or “brought to the point of indubitable perfection.” I stayed with it until I’d discovered something I hadn’t known before.

[Note: Due to interface limitations, the formatting of "Sweet" has been altered; the first line of each couplet should be indented. Anyone wishing to cite the poem should refer to the correct version in Magnetic North.]
Posted by Brian Brodeur at 2:04 PM